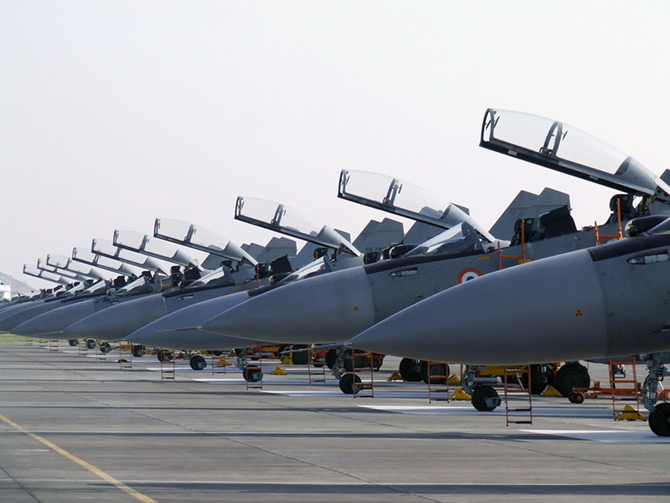 Indian Air Force (IAF), the fourth largest air force in the world, has helped India maintain aerial supremacy since 1971. This unquestioned aerial dominance has helped the country turn tides in its favour in successive conflicts. But this crucial dominance, however, is fast fading as IAF stares at an uncertain future.

An aging and obsolete fleet has left the air force virtually toothless when it comes to inflicting punitive strikes on enemies. IAF lacks reliable strike aircraft in all three operational categories – light, medium and heavy fighters. Imminent retirement of MiG-21 and MiG-27 fighters, which have for years have served as the backbone of the air force, have dented its strike capabilities.

Successive truncated annual outlay for capital expenditure has left several of the air force’s procurement programs in a limbo. While the air force had projected a need for around INR 33,000 crores for FY 2017-18, the ministry has allotted INR 27,556 crores. Over the years, there has been an average deficit of around INR 7,000 crores and this has largely limited IAF’s procurement programs.

The air force has since 2005 batted for fielding at least 42 squadrons of fighter aircraft, which it says is essential to repel any two front war scenarios. With the increasing tango between India’s neighbours, the need for fighters has increased exponentially. Successive Air Chiefs have quipped that air dominance is vital for India to maintain deterrence in the highly unstable South Asian region.

A recent report tabled before the country’s parliament by the Standing Committee on Defence has noted that the air force has less than 33 active squadrons at its disposal. This has highlighted the grappling issues haunting the air force.

Even more worrying is the fact that out of these 33 squadrons at least 9 squadrons are composed of MiG-21 and MiG-27 aircraft which are to be retired by 2020. The air force will, thus, by 2020 need at least 9 squadrons of fighters just to replace the retiring aircraft. The need for inducting newer and advanced fighters to boost the squadron numbers, however, is increasing as China and Pakistan induct fighters at an alarming rate. 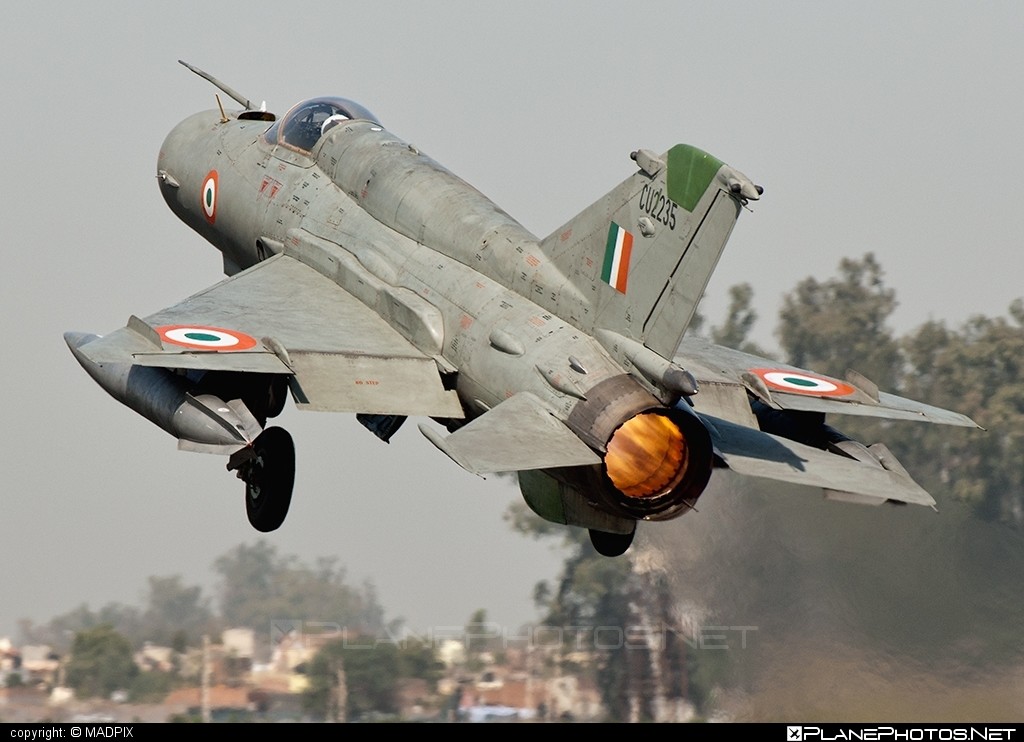 A MiG-21 Bison supersonic fighter aircraft of the Indian Air Force takes off on a routine sortie; Credits – MadPix

China, which boosts of a robust indigenous program, today has the capability to field at least 300-400 advanced fighters along the Indian border. Pakistan, India’s arch rival, which has aligned itself with China, has at least 200-250 frontline fighter aircraft. These multi-role fighters are threatening to bleed IAF off its traditional aerial dominance.

Several of Air force’s replacement plans have been grappling to make progress. While LCA Tejas which was to replace MiG-21 aircraft is years away from mass induction, the decision to scrap MMRCA tender has left the air force in turbulent waters. With IAF and developmental agencies now working on a newer and more lethal version of Tejas dubbed the Mk-1A, replacements for the fast retiring MiG-21 aircraft will be available only after 2018.

The induction of heavier Russian origin Su-30 MKI aircraft has given the air force some much sought respite from the grim situation. But the Su-30 MKIs have themselves been plagued by miserable availability rates thus raising concerns about their reliability. This has forced the air force to committing for only 272 Su-30 MKIs which after induction will be centric to India’s air power projection.

Following the scrapping of the MMRCA tender, India decided to procure 36 Rafales off-the-shelf from France under a Inter Governmental Agreement (IGA). This, experts say, will do little in boosting IAF’s strike power. Several air warriors have quipped that the Rafales are ‘too late and too little’ to answer IAF’s concern.

India’s relationship with its time tested and trusted partner, Russia, which has traditionally provided the country with some of the latest military hardware, has hit turbulent waters. This is evident as India and Russia grapple to make headway in their venture to co-develop a fifth–generation stealth fighter dubbed the FGFA. The air force was to induct the first lot of the planned 200+ fighters in 2017 but now the program’s future itself is being doubted, following its failure to take-off even after successive discussions at the highest levels. 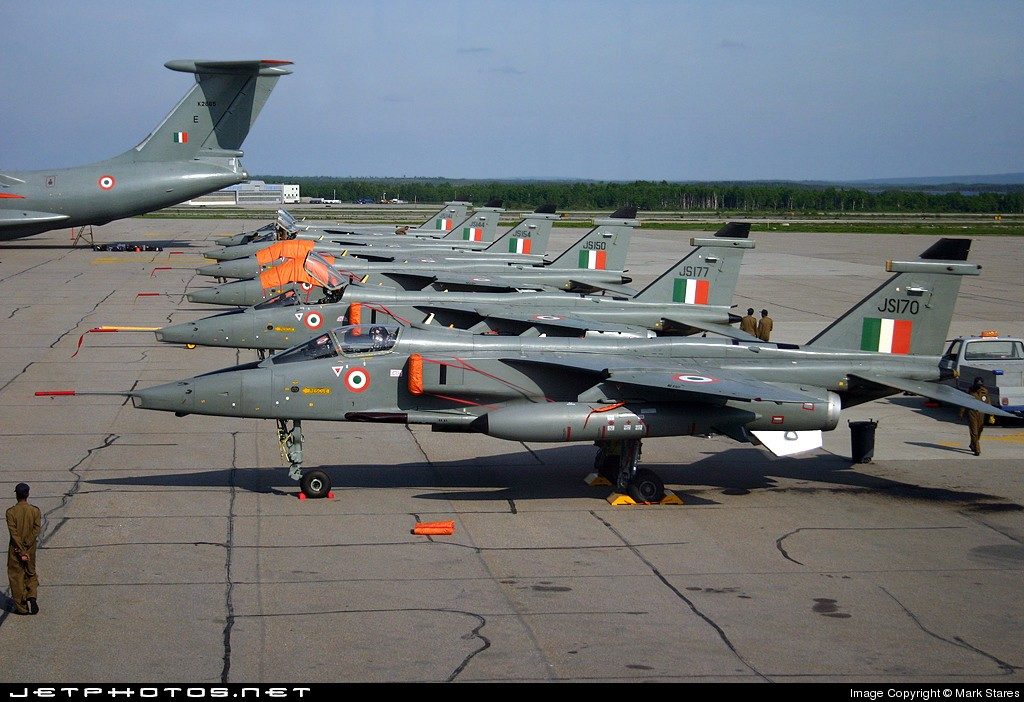 The government in an effort to address the short fallings of the air force had in last October sought the interest of global aircraft manufacturers in jointly producing a single-engine fighter in India. Even though aerospace giants such as Saab and Lockheed Martin have aired their willingness to work with India, the program will mature only after the government releases the much awaited ‘strategic partnership model’.

With no solid procurement program forthcoming to replace the scrapped MMRCA (Medium Multi-Role Combat Aircraft) tender, the air force’s power projection capabilities are largely limited. The newer tender for single-engine combat aircraft will not answer IAF’s need for at least 90 MMRC aircraft, which can carry heavier payloads and inflict strikes deep into enemy territory. Retiring Air Chief Marshal Arup Raha had in his valedictory speech raised the need for these twin-engine fighters to maintain the aerial supremacy.

Also, IAF’s hunt for combat drones, from both indigenous and international market, has met with limited success. Even India’s entry into the coveted MTCR (Missile Technology Control Regime) club has failed to boost India’s prospectus. Even though, Israel, India’s reliable defence equipment supplier, has opened its Heron – TP drones for sale, little progress has been made over the years.  The induction of these drones will surely go a long way in boosting IAF’s strike power.

As the security scenario evolves drastically in the contested Indo-Asia-Pacific region, it is critical for India, an emerging regional security partner, to boast of the most capable military. Air power forms a vital part in a country’s deterrence capabilities and war making doctrine and it is thus critical that the government supplements IAF’s need at the earliest. 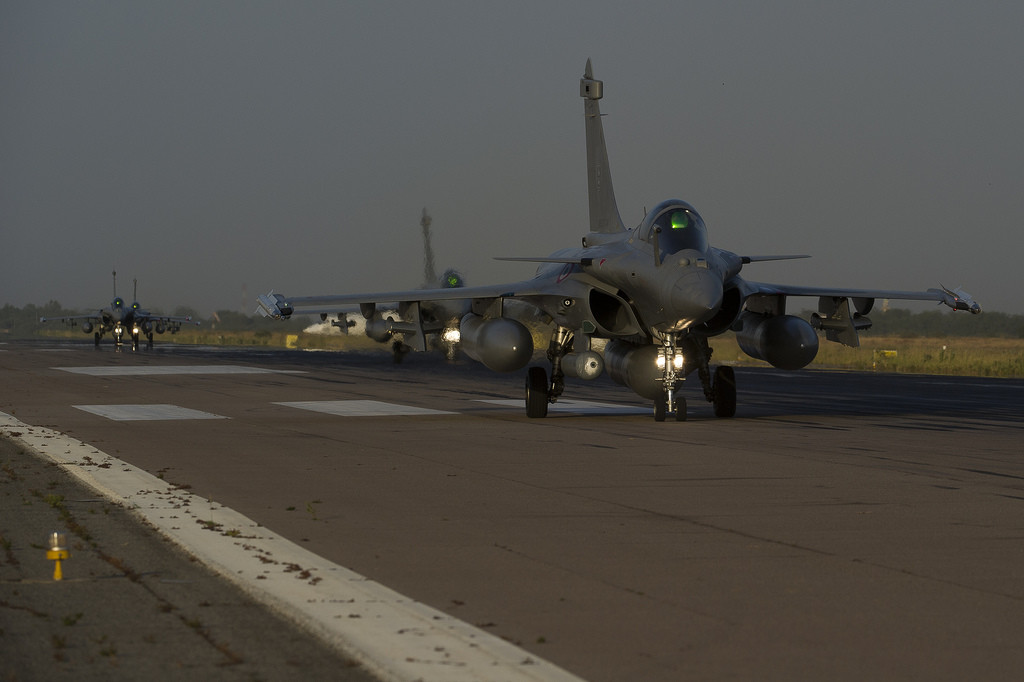