Time Has Arrived for India to Modernise the Sword Arm of its Army – the Infantry.

Termed the ‘queen of the battlefield’, Infantry remains to be the most important and significant component for the success of any land combat force. The infantry, with its ability to operate right at the doorsteps of the enemy and project power across a wide area, has traditionally remained the backbone of any modern military force.

Even though military forces are actively embracing the idea of raising specialized combat arms at rapid pace, the core business end of any battle – boots on ground operations – have been left alone for the infantry. While the specialized combat arms can undoubtedly deny the use of ground for hostile forces, it is only the man-power centric infantry that can hold ground.  When operating in highly complex terrains such as mountains and intense urban environment, it is only the infantry that has the capability to script the outcome.

With over 450 infantry battalions at its disposal, the Indian Army has, since independence, been an infantry predominant force. Infantry men form almost 50% of the Army’s total strength and serve as the country’s first line of protection against a varied sect of threats.

In Indian security prospectus, the importance of infantry has been steadily growing as the country braces to combat increased hostilities with its neighbours and also non-state and proxy forces vis-a-vis terrorism and insurgency.

Even though the infantry men are in contact with hostile forces almost every day, it is worrying to note that this important arm of the Army is being haunted by an abundant scarcity of even basic equipments, thereby largely hampering their operational capabilities.

The modernization of the infantry, which is being widely drafted around Model – 4B (Modified), has alarmingly fallen behind by at least three five year perspective plan periods. Even though successive perspective plans have made provisions for enhancing the capabilities of the arm, the modernization programs have been hanging fire for decades.

Under Model – 4B (Modified), the modernization of the Infantry is being mooted to make the arm not a equipment-centric arm but a capability-centric arm, which will feature a lethal mix of both the modern equipment and combat ready men. The five focus areas drafted under Model – 4B (Modified) are lethality, survivability, mobility, situational awareness and sustainability. Modernization of the infantry when completed, under each of these areas, promises to drastically enhance the capabilities of the arm.

For adding lethality to the ground forces, the most pressing need is for personnel fire arms. The requirement ranges from assault rifles to carbines to Light Machine Guns (LMG).

At the core of the infantry’s requirement is the need for a reliable and lethal assault rifle, which is the most basic firearm for its men. Successive Director General of Infantry (DGI) have raised an immediate need for at least 2,00,000 rifles. The Army has a total requirement for at least 7,00,000+ such rifles. Senior officers of the Infantry quip that this massive requirement, which is expected to breach INR 1,50,000 crore mark when mounted, solely arises as a result of repetitive failures with indigenous efforts. Rifles developed around the INSAS concept, a product of India’s OFB, has largely failed to meet the requirements of the infantry, according to its top echelons. 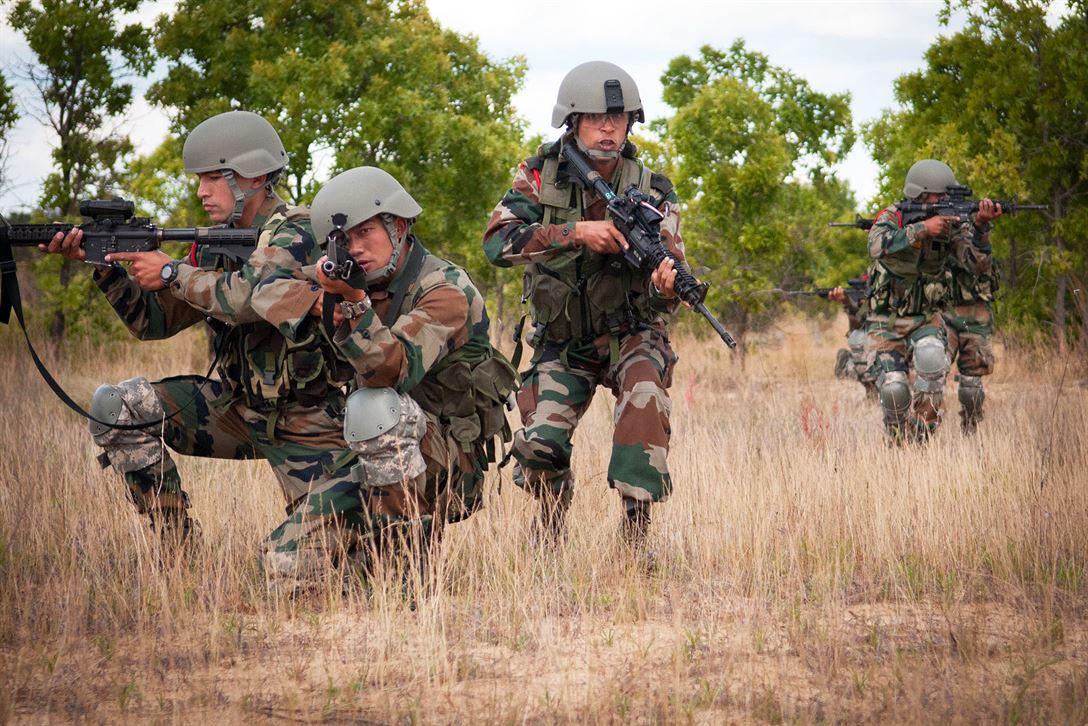 Soldiers depict an assault on a hostile target during a joint training exercise with US. Source – Indian Army

Faced with repeated breakdowns and limited results with the 5.56X45mm INSAS rifle, the Indian Army has been in the hunt for an assault rifle chambered with 7.62X51mm rounds from global vendors since 2000. This shift meant that the Army was indeed considering to adopt a ‘shoot-to-kill’ doctrine over its much criticized ‘shoot-to-maim’ doctrine.

Missing synergy between the indigenous developer and the end user for years, have meant that the country has failed miserably in its efforts to develop a lethal assault rifle. Further, successive global hunts for the rifle have also failed; as every single weapon system fielded for trials over the years have failed to meet the extremely demanding GSQR (General Staff Qualitative Requirements) of the Army. These factors have for years invariably stalled the induction of an assault rifle.

The Army, in September 2016, has yet again initiated the hunt for about 2,00,000 7.62X51mm assault rifles. The GSQRs, have finally been toned down, with the Army shedding away its requirement for interchangeable barrels. The rifle being sought is expected to have an effective range of 500 meters and should feature a modular design, making provisions to fit add-on sights and also a 40mm Under Barrel Grande Launcher (UBGL).

The Army has already forwarded a RFI for several global vendors. Even though, the latest program is to be executed under the ‘Buy and Make (India)’ category of DPP-2016, it has been specified that the ‘Buy’ category will be set to NIL, meaning the down-selected vendor will have to manufacture all of the rifles locally in India. For the tender, Colt of US, Beretta, Israel Weapons Industries, Ceska and Sig Sauer have shown interest. A RFP for the same is expected by May, 2018.

The high costs involved in the acquisition program have meant that the entire need for about 7,00,000+ rifles cannot be answered by Global vendors alone. As a contingency plan, the Army has now decided to breakdown the procurement into distinct categories.

While the frontline soldiers, who are actively in contact with hostile forces, will be equipped with the globally acquired rifles; troops deployed in the rear flanks will be issued with an indigenous rifle. Indian developmental agencies, DRDO and OFB have placed a wide array of options for the Army to choose from. However, both the recently offered Ishapore rifle factory manufactured assault rifle and the ARDE developed MICWS have been rejected by the Army citing technical glitches faced by them. It is time that the user and the developer rise together to meet the pressing needs.

Besides the hunt for the assault rifle, the Army has also recently initiated process to acquire both carbines and LMGs. The MoD has already green lighted the Army’s proposal for acquiring 44,600 close quarters battle (CQB) carbines under a Government-to-Government deal. These CQB carbines are becoming a bare necessity for the Army in Jammu and Kashmir (J&K) as conflicts with terror factions in densely populated urban environment is increasing at an alarming rate. It is reliably learnt that the MoD is at the verge of awarding an AoN (Acceptance of Necessity) for acquiring several thousand LMGs.

Besides the requirements for rifles, the Infantry is also in dire needs of mortars, hand-held grenades and side-arms. With all of these equipments having become obsolete, it is imperative that the Government initiates programs to acquire them concurrently with the Rifles.

If the Army will have to boost the morale of the infantry men, it is critical that they are promised with unmatched survivability factor. This demands for the men to be guarded against a wide array of threats. However, a study of the country’s infantry battalions reveals that the men have hardly any survivability chances in their current gears. It is hard-to-believe and pity-to-accept the fact that there is an abundant scarcity of bullet-proof jackets and helmets, which are one of the every basic necessity to guard our men. When engaged in adverse combat situations, the provision of a bullet proof jacket, senior officers say, will have a distinct psychological advantage on the men, thus helping in bringing down the rate of casualties in a significant manner.

Successive reports by the Standing Committee on Defence and also internal committees have lambasted the Army for its failure in providing bullet-proof jackets and helmets to the men. The lacks of these protective gears according to them have made the Indian infantry to pay a huge price. While the Army has repetitively raised alarms about the missing protective gear, little headway has been made over the years.

The current bullet proof vests being used by Indian forces are extremely heavy. It is thus imperative that the Indian infantry should be provided with the light-weight modular bullet proof jackets, which provides greater agility to troops while protecting the head, neck, chest, groin and sides of the infantry men. Even though the Army has received about 50,000 bullet proof jackets against 3,53,765 jackets, whose orders were placed in 2009, a solution is years away.

With the bullet proof jackets, army is also in need of 3.28 lakh light-weight ballistic helmets. Currently, Indian army men are using what is widely referred to as a “patka”, which is a 2.5kg bullet-proof round moulded head gear that protects head, only partially. As a ray of hope, the first 10,000 light-weight bullet proof helmets were delivered to Indian Army in May 2017. To better the survivability factor, 1.58lakh bullet-proof helmets are being procured. These helmets are designed to meet the standards of leading armed forces, where they can bear the impact of 9mm ammunition fired from a short range. MKU Industries, a Kanpur-based company, will be delivering these improvised helmets in which provisions for radio and night vision equipment are also made.

To increase the sustainability, communication and mobility capabilities of the infantry, the Army has initiated the F-INSAS (Future Infantry Soldier As A System) program. The system, which largely resembles the US Army’s land warrior system, is a hybrid mix of man-machine-technology, according to the development agencies.

The system is being developed to make the infantry a fully-networked, all-weather and all-terrain force. Combined with enhanced firepower and mobility factors, the F-INSAS, since its inception, is touted to make the Infantry the most decisive arm on the battlefield. 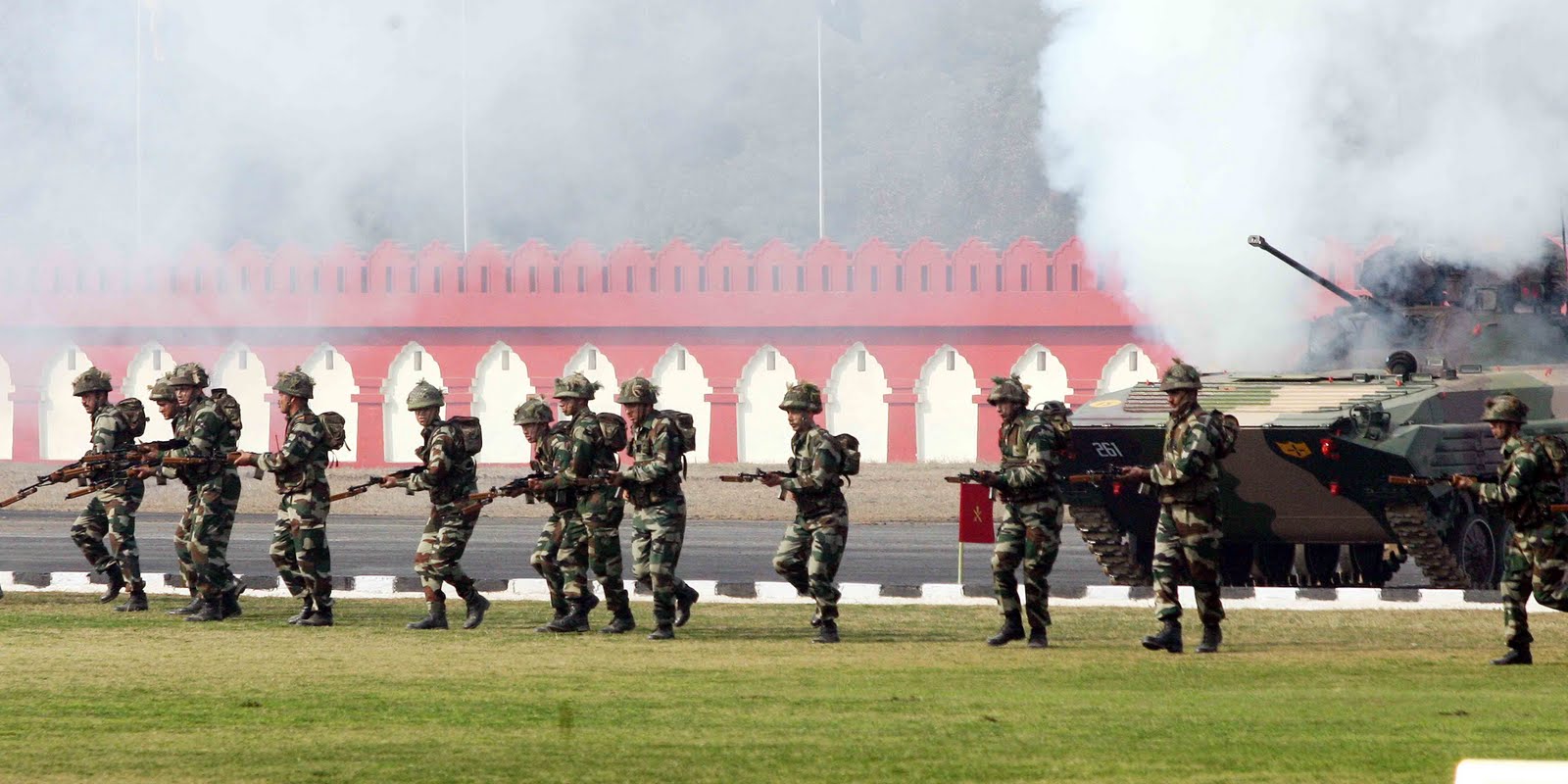 Soldiers of an infantry battalion depict an assault on a target. Source – PIB

Even though the acquisition of rifles and protective gears were expected to be executed as part of F-INSAS, it is appalling that the Army is showing little interest in the proposal. Developmental agencies, however, promise that F-INSAS will feature integrated ballistic helmets acting as HUD systems, integrated weapon sights, hand-held target acquisition systems, portable computers and state-of-the-art communication systems.

Unless the infantry is adequately equipped, it will remain largely ineffective in confronting the raising security across the Army’s operational ambit. The timely completion of these programs, which have been hanging fire power for decades promise to redeem the capabilities of the Infantry, which has successfully guarded the country through four full-fledged wars. These programs besides arming the infantry arm to counter conventional threats also promise to make it a battle-ready force for mitigating any sub-conventional threats as and when they arise.