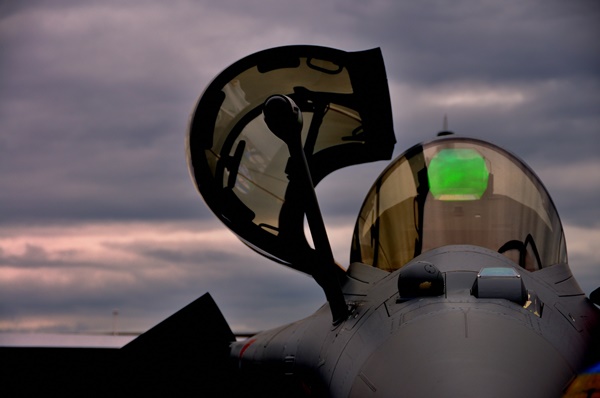 After decades of wait and dents to the aerial superiority due to depletion in combat aircraft squadrons, the ground is all set for receiving the maiden Rafale fighter manufactured by Dassault Aviation for the Indian Air Force (IAF). A high-level delegation led by Defence Minister Rajnath Singh, Defence Secretary Dr Ajay Kumar and senior Air Force officials is scheduled to travel to France next month for a formal handover ceremony of the aircraft. The high-stake event planned at Merignac by Dassault Aviation would witness the delivery of the first of the 36 Rafale aircraft ordered by the Indian Air Force.

PM Narendra Modi during his visit to France for the G-7 summit is learnt to have held lengthy discussion with his French counterpart Macron regarding the progress in the Government-to-Government deal. President Macron, following delegation level talks, had said “Our ties in the defence sector show how much we trust each other. We have also affirmed that we will help in ‘Make in India and the first Rafale aircraft will reach India by next month.”

Following the scrapping of the erstwhile MMRCA tender of the Air Force for 126 aircraft, in which the Rafale had been selected by the IAF, the NDA Government taking IAF’s case for emergency purchase into consideration, had inked a INR 58,000 crore order for the purchase of 36 Rafale aircraft with France under an Inter Governmental Agreement (IGA).

Dassault Aviation, the OEM of the state-of-the-art aircraft, had during the conclusion of the order committed to delivering the first of the aircraft on order within 36 months. While the first of the 36 aircraft is set to be delivered by October, the first batch of aircraft, consisting of at least 4 platforms, will arrive in India only after May, 2020. Until May next year, the delivered aircraft will be utilised for imparting advanced flying training to Indian pilots, who will eventually help raise the maiden Rafale squadron.

It is learnt that the Air Force will shortly be resurrecting the Ambala-based 17th Squadron in preparation for eh eventual operation of the aircraft in Indian colours. While the first squadron is to be raised in Ambala, the second squadron would be raised in Hashimara. The IAF with the OEM has already began construction process in the air bases for setting necessary infrastructure and ground support systems. The Air Force will also be deploying at least two dozen air officers to France for training purpose. While the first batch of 8 officers are already in France, the next two batches are expected to arrive late this year.

Representatives of Dassault, involved with manufacturing process of the IAF’s aircraft, have revealed that the first aircraft with India Specific Enhancements (ISE) would be ready for delivery and induction by 2021. Base on the Rafale’s F3R version, the aircraft for IAF will feature at least 18 ISE, hick are expected to drastically boost the combat capabilities of the aircraft. The aircraft as part of the upgrade will receive major enhancements to the AESA radar, electronic warfare (EW) systems, additional Heads Up Display units (HUDs), enhanced targeting capabilities through integration of state-of-the-art navigation and weapon guiding systems.

The aircraft on induction will be capable of firing the dreaded Meteor BVRAAM (Beyond Visual Range Air-to-Air Missile) system. Developed by France-based MBDA, the Meteor can obliterate aerial targets as far as 150 kilometres away. The Meteor has currently been integrated an operationalised only up on three combat aircraft – Typhoon, Gripen NG and Rafale.

The inter-governmental contract is also inclusive of General Purpose Long Range Standoff Cruise Missile (SCALP) systems, which has a stand-off range of at least 500 kilometers, thus allowing the aircraft to carry out strikes on strategic infrastructures, military headquarters and heavily-defended airfields, from far within friendly skies.