Made in India ATAGS Howitzers Decimates Series of World Records

The Advanced Towed Artillery Gun System (ATAGS), an indigenously developed howitzer by DRDO for the Indian Army, has set a series of world records during its user trials. During its summer trials in Pokran firing range, it has fired explosive artillery rounds to a distance as far as 48 kilometres surpassing the maximum firing range of other contemporary artillery systems with a healthy lead.

First, the Tata Power manufactured gun fired three successive rounds to a distance of 47.2 kilometres following which the Kalyani manufactured gun fired rounds to a distance of 48 kilometres. According to sources, both the tests were conducted with Extended Range Full Bore artillery shells in Base Bleed (BB) configuration. Earlier, the Kalyani prototype had fired an explosive round in Boat Tail (BT) configuration to a distance of 38.6 kms surpassing another milestone. The successful test firing of the gun proves the prowess of indigenous companies in manufacturing world-class defence systems.

Senior artillery regiment officers credit this achievement of the ATAGS system to the larger charge chamber, which according to them enables the platform to carry higher amount of propellant explosives for every round. Around the globe, artillery systems such as ATAGS have a maximum striking range of about 35-40 kilometres. The increased kill range of the gun system not only enables the army to decimate targets deep within enemy territory, but will also drastically increase the survivability rate of the gun itself. 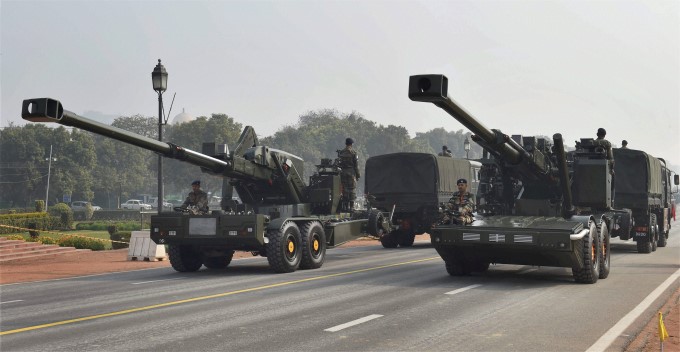 Kalyani Group, one of the lead co-developer and manufacturer of the gun system, in a statement said “Kalyani Group takes pride in setting a new world record with the indigenously manufactured 155 mm / 52 Caliber Advanced Towed Artillery Gun System, the best-in-class artillery system jointly developed with DRDO.”

Briefing about the guns capabilities, the statement said “During the trials firings at Pokhran range the ATAGS variant developed by Kalyani group, registered the longest ever distance of 48.074 KM surpassing the maximum range of 35 to 40 km fired by any artillery gun system in this category. The ordinance including barrel and breech mechanism on both variants of the gun is developed at Kalyani Group’s advanced artillery manufacturing facility. The achievement of this historical feat reaffirms Kalyani Group’s expertise in metallurgical knowledge and state-of-the-art manufacturing technology”.

Development for the ATAGS platform began in 2013 with DRDO’s ARDE (Armament Research and Development Establishment) at the helm, since the beginning, the project has actively tapped the expertise of the private sector for overcoming developmental challenges. While, Kalyani Group and Tata power (SED) have taken the centre stage, Mahindra is also actively pitching in critical sub-systems to provide extended support to realise the full potential of the platform.

The Indian Army has a need for at least 1,500 towed artillery howitzers, especially along the troubled and volatile Western theatre. Even as the ATAGS shots through challenges, DRDO is betting big on its indigenous howitzers to surpass the monopoly held by foreign players.