DRDO has successfully completed the developmental trials of the indigenously developed Nag Anti-Tank Guided Missile (ATGM), which will serve the purpose of boosting country’s mission to attain self-reliance in defence equipment manufacturing. The announcement came on August 8, 2017 following successive tests of the missile system against two different targets at varying combat conditions in the firing ranges at Rajasthan.

According to a statement by MoD, the missile system struck the target at both occasions with unmatched precision. According to DRDO, all mission parameters met the requirements as stipulated by its end-user, the Indian Army. DRDO has further revealed that alongside the Nag missile, its launch platform designated the NAMICA has also proved its combat effectiveness.

Nag – a 3rd generation ATGM, has been developed by DRDL (Defence Research and Development Laboratory) in collaboration with RCI, Imarat and BDL, under the IGMDP (Integrated Guided Missile Development Program). According to DRDO, Nag has a strike radius of 4 kilometers and can neutralise tanks and infantry vehicles even if they are equipped with hardened armour. 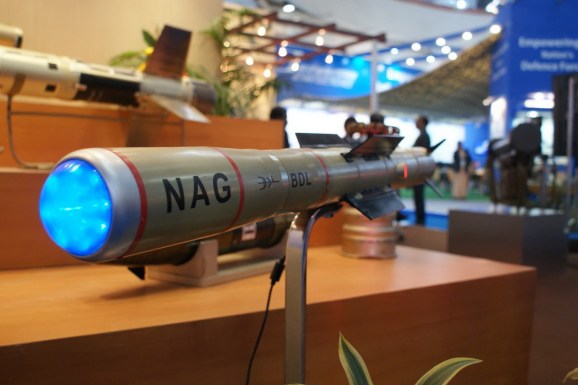 The development of Nag ATGM has been a gruelling, challenging yet remarkable program for DRDO. Constant upgradation of requirements by the user and technological challenges had dragged along the project with years of delay. However, the missile has proved its prowess in repeated tests and is expected to take the lead role in the coming years replacing the aging Konkours and Milan systems. As Nag enters the crucial mass production stage, the Army has committed itself to 445 missiles and at least 13 launch platforms.