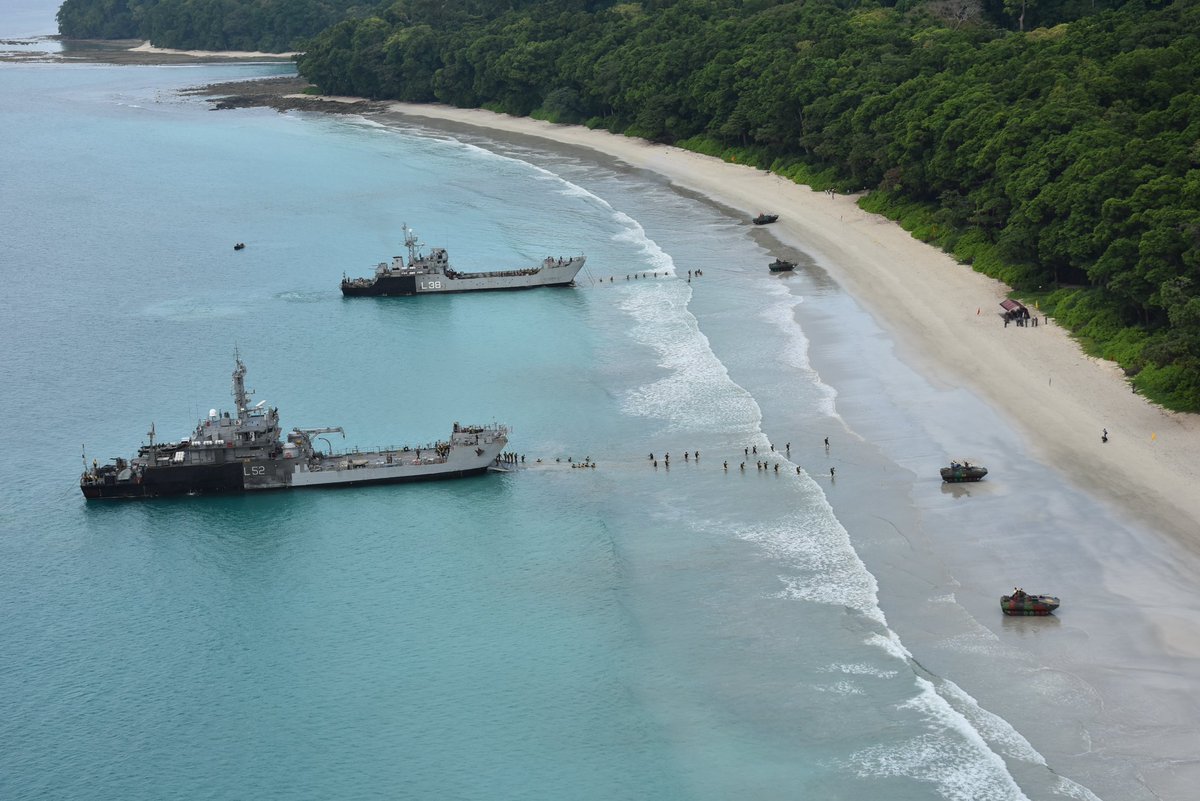 For a peninsular country like India, guarding its vast coastal waters is undoubtedly a mammoth task and it has further been amplified by the fact that India sits facing some of the most strategic sea highways. Termed SLOCs (Sea Lines of Communication), these sea highways are the feeder maritime routes for multiple Asian countries situated east of the Indian Ocean Region (IOR).

These SLOCs are strategically important for India, as the country almost solely depends up on them to sustain its trade business. Maintaining sanity of these strategic sea highways has been one of the most important tasks undertaken by the Indian Navy. With a formidable naval fleet and nearly unquestioned dominance, the Indian Navy had maintained a privy eye over the maritime activities around the Strait of Malacca.

However, India’s traditional dominance is now in question, as an adventurous PLAN — the naval wing of China’s People’s Republic Army – aggressively forays into the region, which India considers as its own backyard.

For decades, India has been actively working both on the diplomatic and military front to counter the growing Chinese presence and to maintain its supremacy. While India framed the ‘Act East’ policy to strengthen its relations with East Asian countries, modernisation of the country’s naval force is also being actively pursued. Apart from acquisition of frontline battle vessels, India is also pursuing programs to enhance infrastructure along the Eastern Sea Board.

The Andaman and Nicobar Island belt has been one particular region the country has mainly concentrated on. Labelled as a floating aircraft carrier by naval experts, these vast inhabited Islands poses great strategic value. If rightly nurtured by the country, these Islands promise to enhance outreach to the Navy and could be a direct answer to China’s ‘Pearl of Strings’. 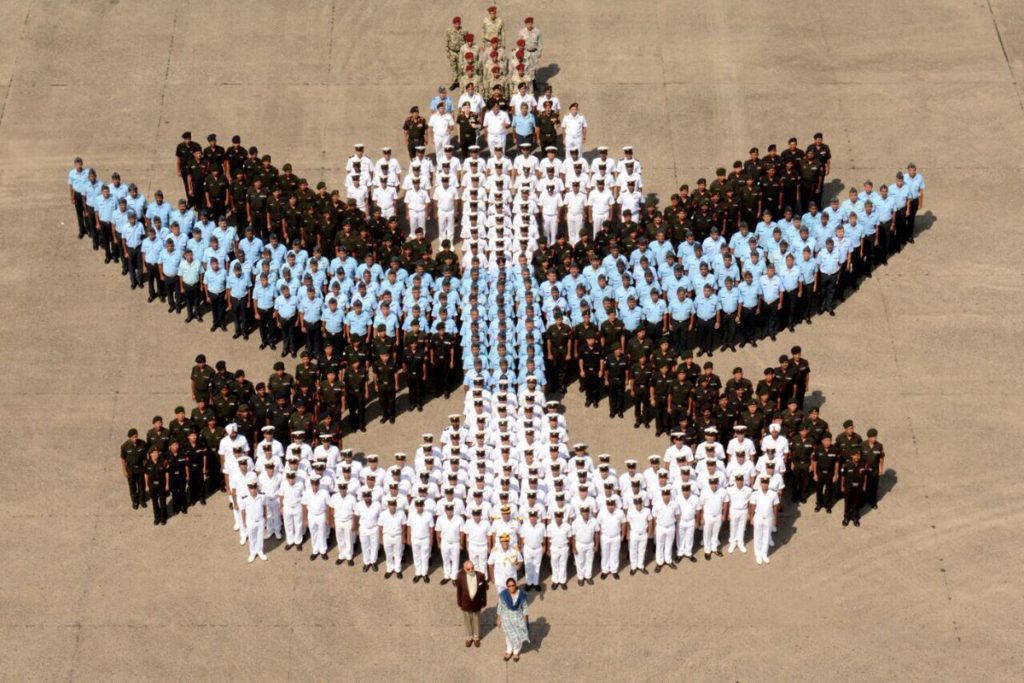 A Spectacular Picture Depicting the Jointness of the Andaman and Nicobar Command ANC; Courtesy-Indian-Navy.

Several Islands situated in the Andaman and Nicobar region sit overlooking the strategic Malacca Strait, through which a major part of the Sea Lines of Communication (SLOC) criss-crossing the IOR traverses. As China also largely depends up on these SLOCs to stay connected to the West and thus control over these waters garners greater importance, these Islands have garnered significant strategic value.

India’s largest and the most strategic move in tapping the capabilities of these strategically located Islands came in 2001, when the country carved out a tri-command consisting of army, navy and air assets. This move, which provided the country its maiden and only tri-services command, promised greater control over the Andaman and Nicobar region by providing the country’s military forces a strong foothold along the strategic sea highways.

But after a decade and a half, since the establishment of the Andaman and Nicobar Command (ANC), little has changed on the ground. Several naval planners and officials who have had brief stints under the tri-command unanimously agree that the command has failed to garner credible tooth to address the increasing Chinese menace.

Successive presentations from the tri-command to MoD have also highlighted the dismissal progress in the infrastructural build-up activities under the command. During the recent visit of Raksha Mantri Nirmala Sithraman to the ANC, it is believed that the command briefed the Minister about the need for inducing traction in these programs and also about the increasing activity of PLAN warships close to Indian territorial waters.

After decades of delay, MoD is now racing against time to finalise plans to deploy more assets under the ANC, which is currently composed around 15 major warships. The command also has two Navy Sea bases, four Air Force and Naval Air bases and a single Army brigade.

One of the biggest projects launched under ANC was for enhancing INS Jarawa, a sprawling sea base, which to date remains centric to all naval operations taking place under the command. INS Baaz and the Car Nicobar Air Force base are the only bases to have operated the Air assets.

Even though the MoD had planned to deploy frontline battle vessels during the inception of ANC, the command has been left to fend with only small patrol vessels, which are capable of only conducting reconnaissance and surveillance missions. Lacking primary long range surveillance equipments, the effectiveness of these vessels has been in question. ANC on several occasions has made a case with the MoD for deploying larger sea going naval vessel such as amphibious assault platforms and guided missile stealth destroyers.

The fact that almost 70% of Chinese export and about 90% of Chinese oil traffic crisscross through the Strait of Malacca, only amplifies the strategic value of the ANC. A naval blockade imposed around the Strait of Malacca would choke China off its oil and other essential supplies in a matter of days. These blockades are one of the prime deciding factors in a possible conflict. 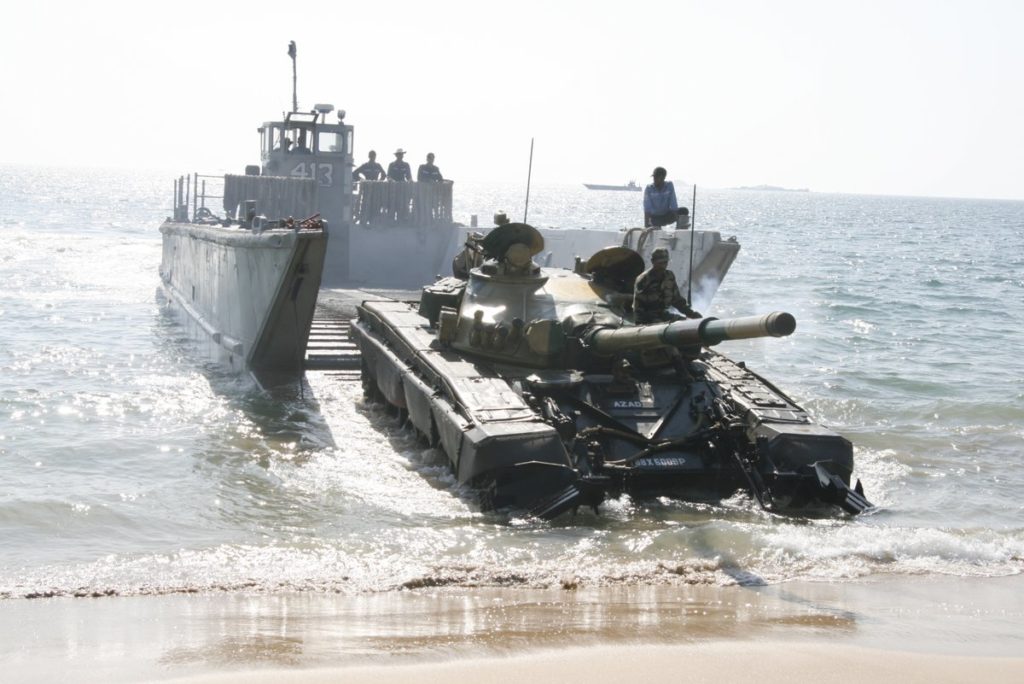 A Tank embraces from a landing vessel during a training mission which was mounted by Andaman and Nicobar Command (ANC); Courtesy – Indian Navy.

With growing military capabilities, PLAN has been actively forward deploying its modern surface vessels and submarines close to Indian waters in an effort to test the country’s preparedness levels. Concurrent to the force build-up, China is making a renewed push to sustain its relations with nations situated along these SLOCs. A robust relationship promises China operational ground in the region. China’s foray closer to India territorial waters is an alarming move for India. For instance, China is rumoured to have signed an agreement with the Myanmar government to lease Coco Islands, where a small naval outpost has already been erected by PLAN. The Coco Island is only 70 nautical miles away from several Andaman Islands.

To counter these moves of China, amphibious operations were given due importance when the operational doctrine was drafted for the command during its inception. However, ANC has been forced to operate with only a handful of amphibious vessels, which have crossed their shelf life and have minimum capabilities to mount amphibious operations. While indigenous efforts have been underway for decades, the success in these programs is partial as the vessels constructed by country’s shipyards have limited capabilities. The tender for acquisition of larger Landing Platform Docks (LPD), which promise to be force multipliers in amphibious operations, has for years been in doldrums.

For India to project its power in region, air operation is essential. Limited air assets and infrastructure under ANC have effectively left the air power projection capabilities in a deep abyss. The air wing under ANC is currently formed around the Dornier Do 228 aircraft, which are being used as the primary recon and surveillance platform by the command. After runways at INS Baaz and Car Nicobar Air base were increased in length, bigger ASW platforms like the P8I have been deployed under the command, but only temporarily.

Even though ANC has operated Mi-17 V5 fleet of copters and several fighter aircraft during exercises, plans to permanently deploy at least a squadron of frontline jet fighters have remained only on papers. IAF, which has in the past fielded its Sukhoi Su-30 MKI and Jaguar deep penetration aircraft for exercises, is contemplating over its proposals to permanently deploy a squadron of its frontline air superiority fighters – the Su-30 MKI – at the Car Nicobar air base. The dipping fighter numbers in the air bases across the Indian mainland is however thwarting any progress in IAF’s proposal. Personnel who have served at these bases quip that the country has failed to efficiently utilise the facilities that exist in these bases. Addition of aircraft such as the P8I and C-130J to the ANC will be a major game changer.

The air defence module under the command is another matter the government needs to address. The command currently lacks an effective air defence posture. Even though deployment of Akash SAM systems and also the under development MRSAM systems have been considered, budget constraint have forced MoD to shy away from these procurements. The Navy is independently pursing its program to deploy land based coastal missile batteries and a RFP for the program is under way. The deployment of these systems are bound to thwart any unwarranted adventures of hostile powers.

The Indian Army has also been working towards increasing the number of its forward deployed troops under the Command. While there have been recommendations to boost the brigade-level deployed troops, financial and men power crunches have left the Army with limited options. But the Army, however, has been working closely with the Navy to keep its troops battle ready and has been holding joint exercises, especially those concentrating on amphibious operations. Any attempts by the Army to enhance its troops under the ANC will take time. 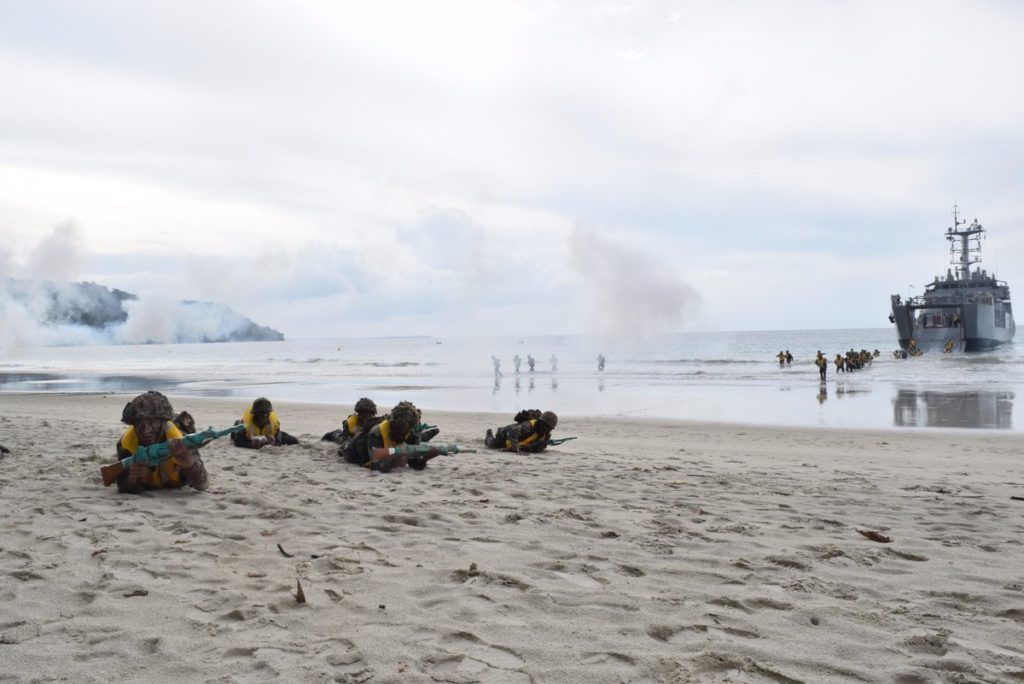 Soldiers of the Indian Army operating under ANC participate in an amphibious operation; Courtesy – Twitter.

Apart from these measure to build-up the military posture, the government also needs to work towards enhancing the quintessential diplomatic relations with countries sitting close to ANC. Adding traction to these relations under the aegis of the country’s ‘Act East’ policy will provide the country a strong foothold in the region. A strong military posture coupled with sustainable diplomatic relations is bound to deter any hostile powers, engaging in unwarranted activities along these strategic waters.