INS KADAMBA : THE CROWN JEWEL OF THE INDIAN NAVY 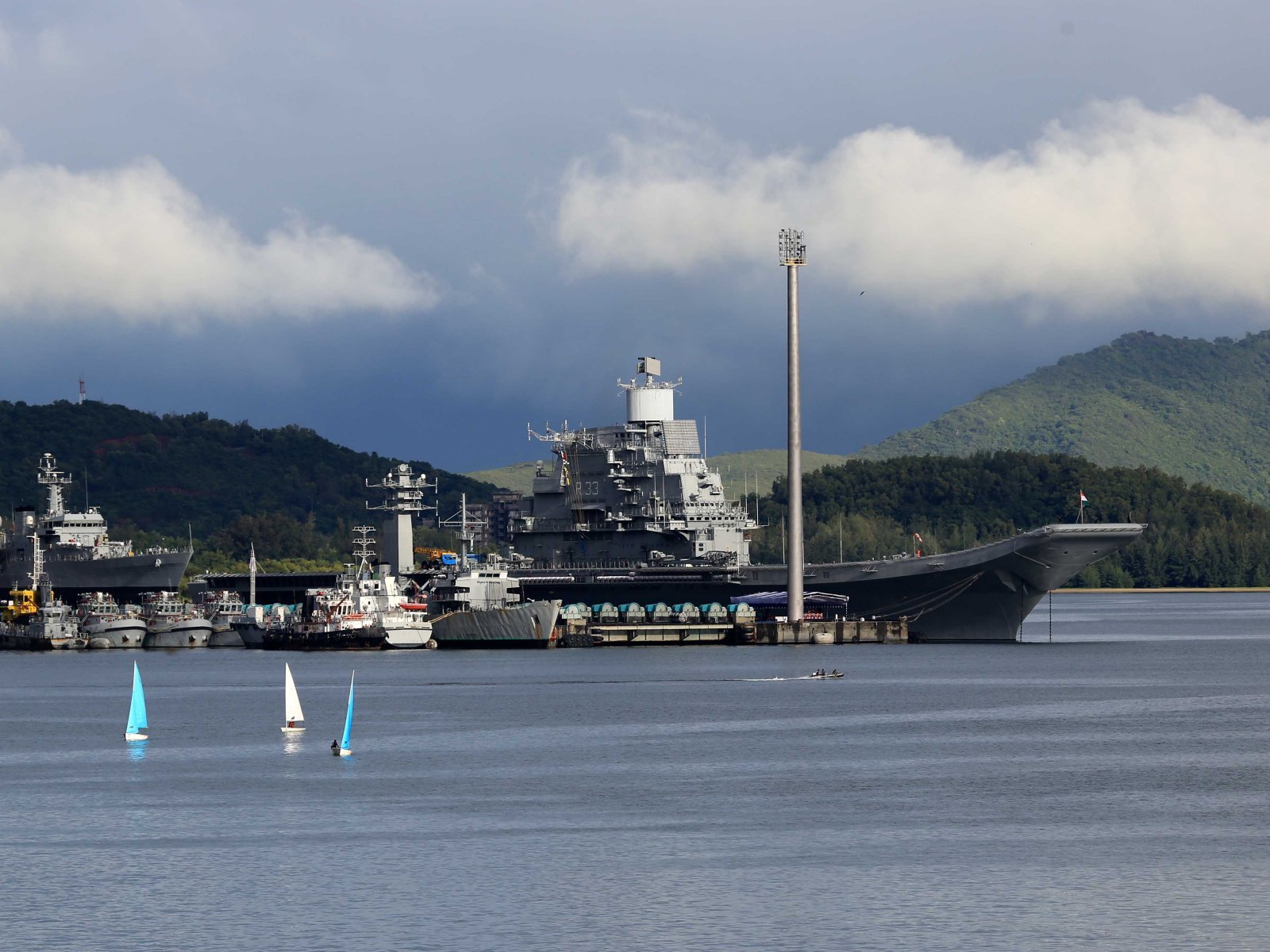 India is a maturing maritime nation, which is enclosed by Indian Ocean and Arabian Sea. Close to 95% of India’s international trading depends on maritime transport. It is this trade quotient that drives the industrial and economical growth of the country.

Indian Navy is tasked with the responsibility of guarding these Sea Lanes of Communication (SLOC). Under India’s watch are crucial choke points along maritime highways that connect west to the east. Control over these chokepoints is critical in war times when a naval blockade is to be imposed.

Forming the core of Indian Navy’s strike power is its Western Naval Command (WNC). Headquartered at Mumbai, WNC is in charge of guarding India against sea-borne threats and keeping a privy eye over the country’s far stretched maritime interests. Western sea board is critical to the country’s growth and progression. With India’s ever hostile neighbour Pakistan sitting right across the waters WNC assumes far greater importance.

WNC controls the gateway to the Arabian Sea and the Indian Ocean. Ambit control over these waters is critical for maintaining the sovereignty of the nation. Under WNC’s command are over 60 battleships which have guarded the nation for decades.

The crown jewel of the Western Naval command is INS Kadamba situated in Karwar. Commissioned on 31st May 2005, Kadamba is centric to India’s power projection along its Western waters. Kadamba is supplemented by Mumbai and Kochi naval bases.

Construction of INS Kadamba began in the late 90’s under ‘Project Seabird’. The sole purpose of Seabird was to construct a sprawling navy exclusive base in a prime location along the Western coast.

The need for such a base was realized during the 1971 War with Pakistan. A chunk of WNC’s assets back then was stationed at Mumbai Harbour. When the conflict spruced, WNC assets were mobilized with a task to impose an impeccable naval blockade against Pakistan. The busy commercial shipping lanes crisscrossing close to Mumbai played a spoilsport.

Also, the docks themselves were in the reach of Pakistani bombers and all assets had to be moved to sea. This considerably affected the operations of the navy.

Taking note of these short fallings, India began search for a strategically located area where a navy exclusive base could be set-up. Karwar, Kochi and Kannur all along the Western sea board were shortlisted.

The area designated around Karwar had multiple benefits. Primarily, it was situated between the hills of Western Ghats which provided unmatched geographical security against hostile forces. Kadamba sat overlooking sea routes connecting Persian Gulf and East Asia. Control over these waters meant India had major say in the whole of Asia-Pacific region.

For years, shallow waters in Mumbai were forcing Indian submarines to float out in open waters. This meant there was hardly any secrecy in India’s silent service deployment. Navy for years was on the hunt for a deep water harbour and the area around Karwar promised one of India’s deepest sea harbours. Above all, this particular location was far from the reach of Pakistani assets.

Relentless efforts by the navy resulted in the Indian government launching ‘Project Seabird’ in late 80’s. After years of delay, Seabird was formally sanctioned in 1999 by then Defence Minister George Fernandes under CNS Sushil Kumar.

Development of INS Kadamba was divided as Phase I, II, IIA and IIB. Each of these phases was to rapidly expand and modernize the navy’s capabilities. Kadamba ever since its inception was pegged to be developed as a strategic asset.

Phase I was completed in 2005 following which Kadamba was dedicated to the nation. Karwar was firmly placed in the global maritime watch map. INS Shardul became the maiden ship to be homeported in the base. Kadamba at this stage was capable of homeporting around 11 frontline battleships. A unique ship lift facility to aid maintenance of the fleet was also set-up. The sprawling base boosted of a modern township. INHS Patanjali was constructed to cater to the medical needs of the personnel.

Phase II of ‘Project Seabird’ began in 2012. By then, Indian Navy had acquired just over 4,400 Hectares of land to develop Kadamba. Under Phase II, a 10,000 tonne ship lifting facility, additional jetties and infrastructure to handle multiple surface combatants was constructed. Submarine pens were carved out in the deep mountains of Western Ghats.

Kadamba was braced up for a major milestone. And that finally happened in January 2014 when INS Vikramaditya docked in the base. Displacing just over 45,000 tonnes Vikky as it is fondly called was homeported in Karwar. This event changed the operational status of the base for eternity as almost all of WNC’s operational fleet was moved out to Kadamba.

Overtime, INS Kadamba has become the largest naval base to the east of Suez Canal. It is now capable of hosting aircraft carriers, destroyers, frigates, tankers besides submarines which will remain protected in dedicated underground pens. Nearly the whole of WNC can and will operate out of Kadamba in the future. Currently the base has berthing space for at least 40 frontline battleships of the Indian Navy.

At the epicentre of India’s quest for attaining ‘blue-water navy’ status is INS Kadamba. Development is an ongoing process at the base. Under the planned Phase IIA and IIB Indian Navy envisions enabling Kadamba to homeport at least 60+ vessels. 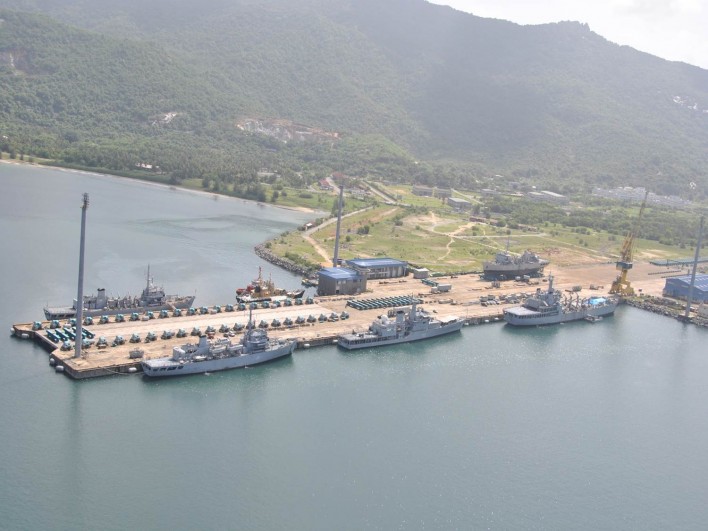 When INS Vikrant, the under construction aircraft carrier, drops its anchors in Karwar – INS Kadamba will attain an unique status of playing host to not one but two aircraft carriers.

Navy plans to eventually move out the entire submarine fleet under WNC to Karwar. For this at least 20 submarine pens are believed to have been carved out deep inside the secure mountains of Western ghats. Kalvari-class submarines being built under Project P-75 will be homeported in Kadamba.

Kadamba is at the epicentre of India Navy’s operational capability and has given unmatched access to the Arabian Sea and Indian Ocean. As Kadamba breaks through turbulent waters and attains a strategic status, Indian Navy will inch ever closer to its much sought ‘Blue Water Navy’ status.

(All information provided is from open sources. No confidential, operational or restricted information has been shared in this document.)