Arjun Series : Were the Arjun MBT’s growl silenced by Army? And will the haunting ghosts ever make way for Arjun Mk-II MBTs? 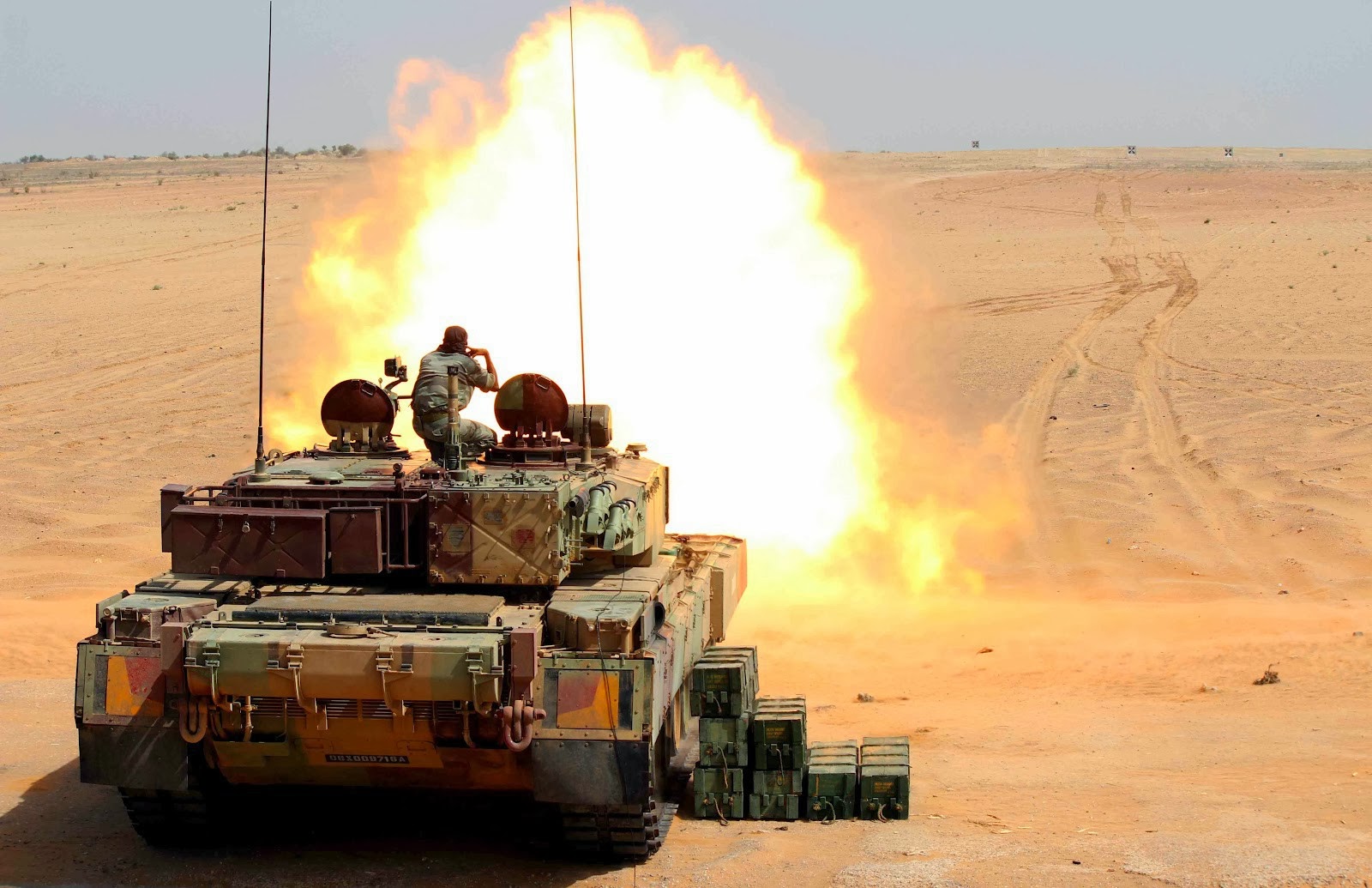 India which is an emerging regional power in the Asia-Pacific region at its disposal has the fourth largest military to guard its broad interests. For decades, attaining self reliance in catering to the needs of the armed forces has been a key mission for the country. At the helm of this ambitious mission is DRDO (Defence Research and Development Organisation), India’s premier defence technology provider.

One of DRDO’s most celebrated yet criticised product is the Arjun MBT which was designed indigenously by its Chennai based CVRDE (Centre for Vehicle Research and Development Establishment) laboratory. The tank’s development journey which began way back in 1974 in an effort to replace the aging Vickers Mk-I and T-55 MBTs has been marred with criticism from its end user – the mechanised forces of the Indian Army.

Arjun which was rolled out of the sheds of HVF (Heavy Vehicle Factory), Avadi in 2004 was poised to be the mainstay of the Indian Army. With more than two decades down the lane, the story, however, is entirely different.

Currently, under the command of the Indian Army are over 4000 MBTs which comprise of Russian origin T-90 and T-72 MBTs and also the indigenously designed Arjun MBTs. While aging T-72s form the core of Army’s strike power, the T-90s are fast gaining solid ground. Arjun, however, numbers to a mere 120 tanks amounting to less than 3% of the overall tank force of the army. A tank which was to be the mainstay of the army, today, has buckled under the pressure of foreign products.

Arjun which was designed in an effort to provide the country with its maiden indigenously built MBT has been blown off it’s track. The high stakes blame game between the army and DRDO has effectively dampened the prospectus of India’s once ambitious project. 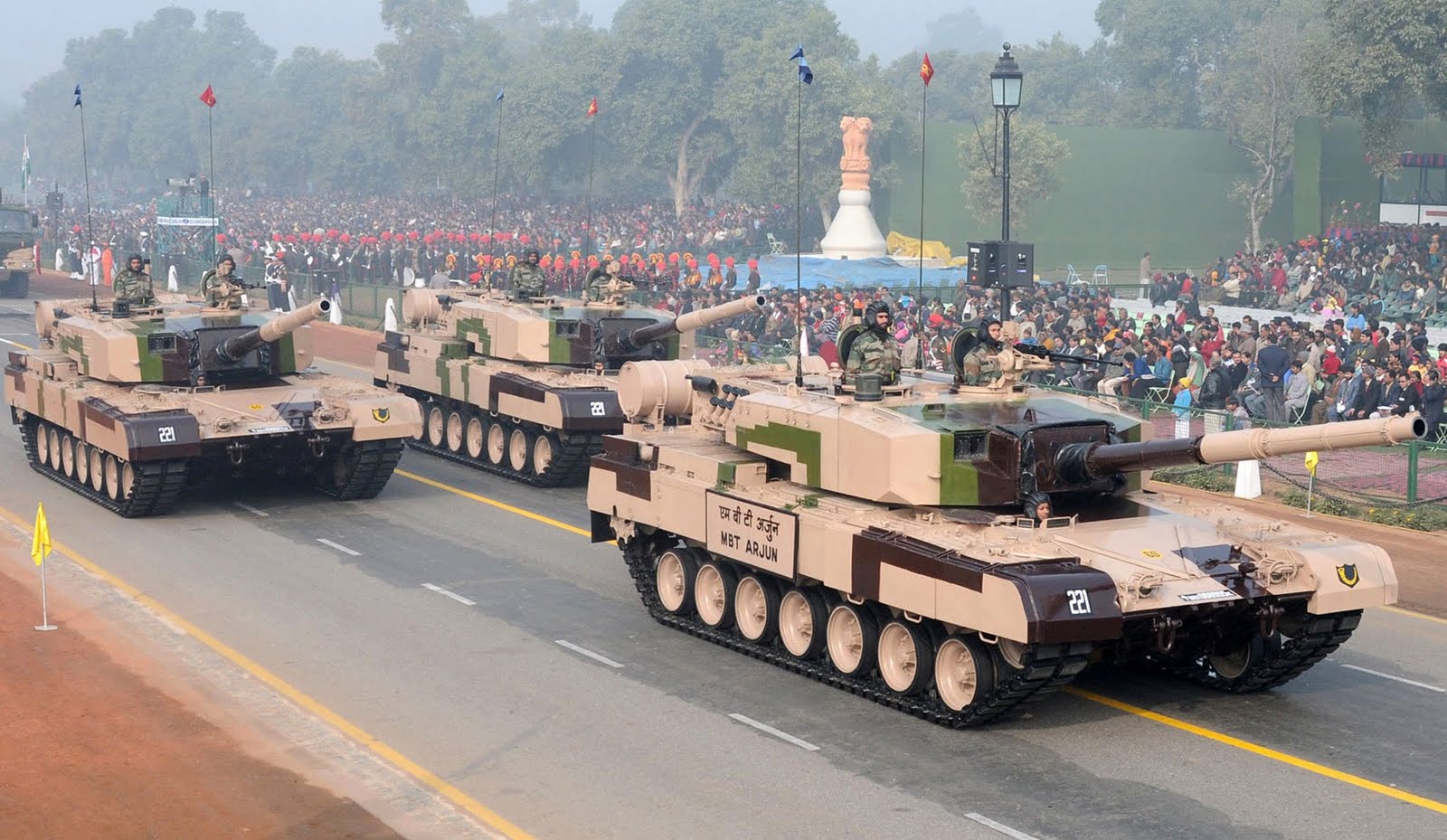 While the Army has repeatedly raised concerns of Arjun failing to meet its requirements, the developmental agency – CVRDE – has termed the tank a world-class product that was overlooked by the end user.

A key note in Arjun’s developmental cycle has been the repeated trails the tank has undergone with its end user. The results from these trials form the core of CVRDE’s reply to Army’s scathing attacks on Arjun program. The developmental agency has on several occasions termed these results a certificate to Arjun’s capabilities.

The trials have not only proven the abilities of the tank but have also helped CVRDE to address several short fallings. Initial prototypes alone had traversed over 70,000 KMS under mobility trials and had fired close to 7,000 rounds of armament during evaluation trials. It was the results of these trails that had won the confidence of the army, which without many options had placed an order for 124 Arjun Mk-I MBTs in 2000 to replace the T-55 tanks along the Western border.

Further, Israel Military Industries (IMI), makers of the famous Merkava tanks, was roped in as third party evaluators to certify Arjun. After putting Arjun through rigorous trials, IMI concluded that the tank would easily outwit most of the MBTs in service with other countries.

One of the most definitive phases of Arjun program came almost a decade and a half after the program’s closure. In 2010, the army began the much awaited comparative trials between Arjun and T90 MBTs. DRDO had aggressively campaigned for these trials for over a decade to prove Arjun’s might by levelling it directly against its foreign competitor.

During the trials a squadron each of these MBTs were pitted against each other and were tasked to perform several tactical tasks in the deserts of Mahajan ranges. After covering over hundreds of kilometres in scorching temperatures and accurately firing close to 50 rounds on moving and stationary targets placed at varying distances, each of the Arjun tanks had successfully outwitted the T-90s in every single critical parameter. 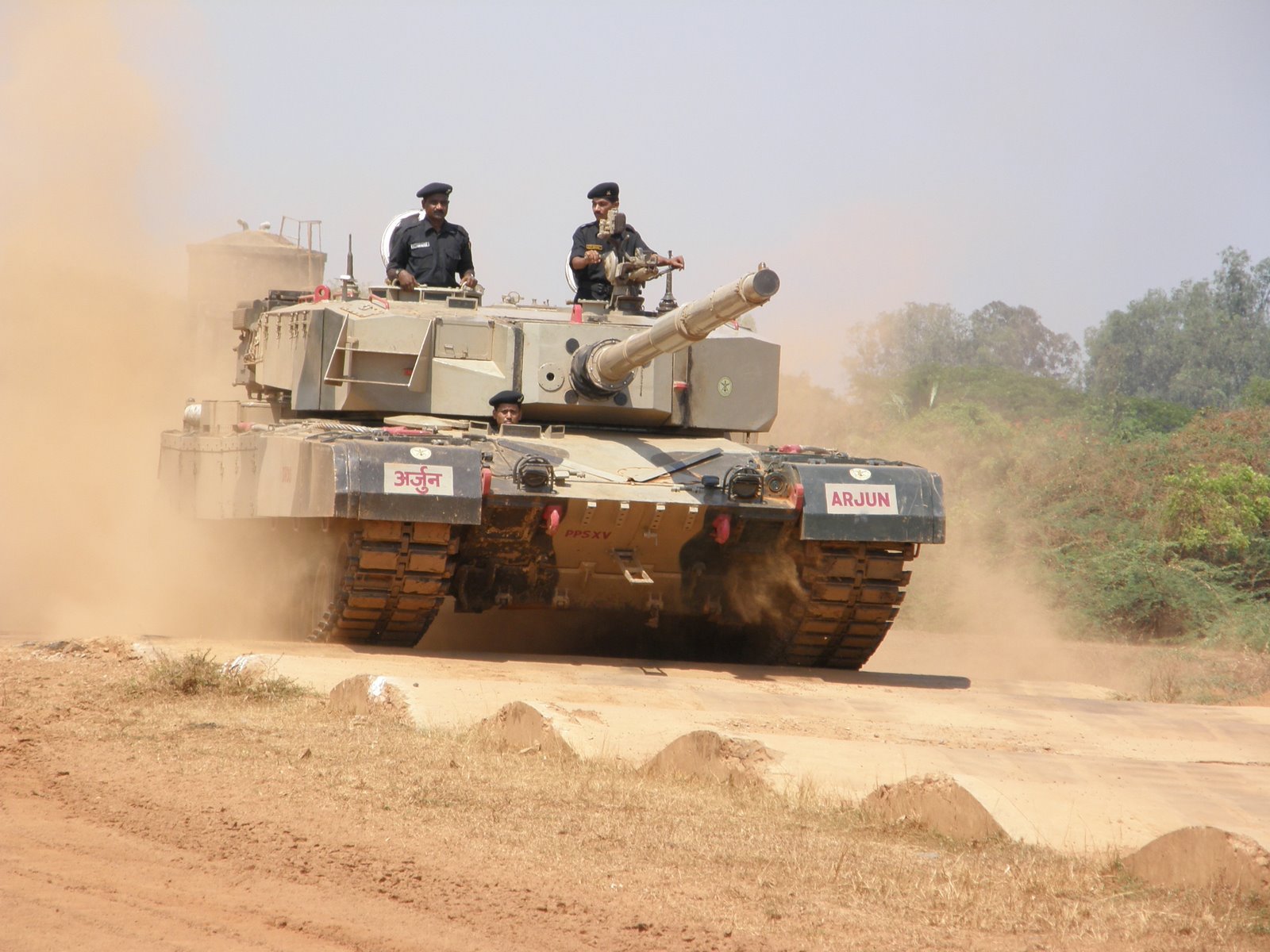 An Arjun rumbling down the test track at HVF, Avadi; Due Credits – Ajai Shukla, Broadsword.

Arjun, which was repeatedly termed as an overweight platform by Army, was termed satisfactorily mobile even on the soft desert sands. Army’s concerns of Arjun getting implanted in the sand was blown all at once. Rounds fired by Arjun largely struck distant targets with pin-point accuracy. The tank also successfully treaded through 6 feet of water as part of testing its ability to cross canals during cross-country deployment. All this unravelled even as the imported and much-talked about T-90 MBTs were cooked at temperatures over 50°C.

The top brass of the army including the top echelon of Mechanised forces, who had repeatedly underscored Arjun’s capabilities, were visibly taken back by Arjun’s unmatched performance. CVRDE was ecstatic about the performance of their product. An immediate increase in the numbers for Arjun was expected by both the developer and manufacturer.

But what followed was another major blow to Arjun. The army in its official report classified the 2010 trails as only an evaluation round to determine an operational role for Arjun in the battlefield. The short fallings observed during the trials were upheld against Arjun.

In a massive blow to the Arjun program, Army decided not to opt for anymore Mk-I tanks. A request for a newer and more potent Arjun Mk-II variant which would feature 15 major and 78 minor improvements over the Mk-I tanks were raised by the Army.

The Mk-I version of the tank had effectively bowed out without its end user ever committing itself to the product. Undeterred, CVRDE effectively began development for the Mk-II version. Key demands from the army were to enable Arjun with missile firing capability, providing ERA protection panels and night vision capability for Commander’s Sight, Mine ploughs and also to enhance mobility. These developments would simple add weight to Arjun which already was being termed as an ‘overweight’ platform by the Army.

Within a year, CVRDE had successfully proven over 53 key technologies. By 2016, DRDO had mastered several of the technologies required to rollout Arjun for full blown user trials. Hurdles are being faced in equipping the tank with missile firing capability and to develop a reliable ALWCS (Advanced Laser Warning and Countermeasure System).

Following extensive evaluation trials, the army has raised concerns with the Mk-II version, especially about the tank’s weight. But, it was a well known fact that the tank’s weight would balloon if newer systems were incorporated on to the platform. CVRDE, however, is confident of reducing the weight by at least 2 tonnes in the near future. Also the newer and advanced Hydro Pneumatic Suspension System can handle loads up to 70 tonnes. Several upgrades to the engine and transmission unit itself have provided satisfactory power to weight ratio.

The Mk-II version of the tank is expected to be certified only by mid-2017 and it has to be seen if the Army will really back the Mk-II variants or if they will follow the tracks of the once ambitious Mk-I program. 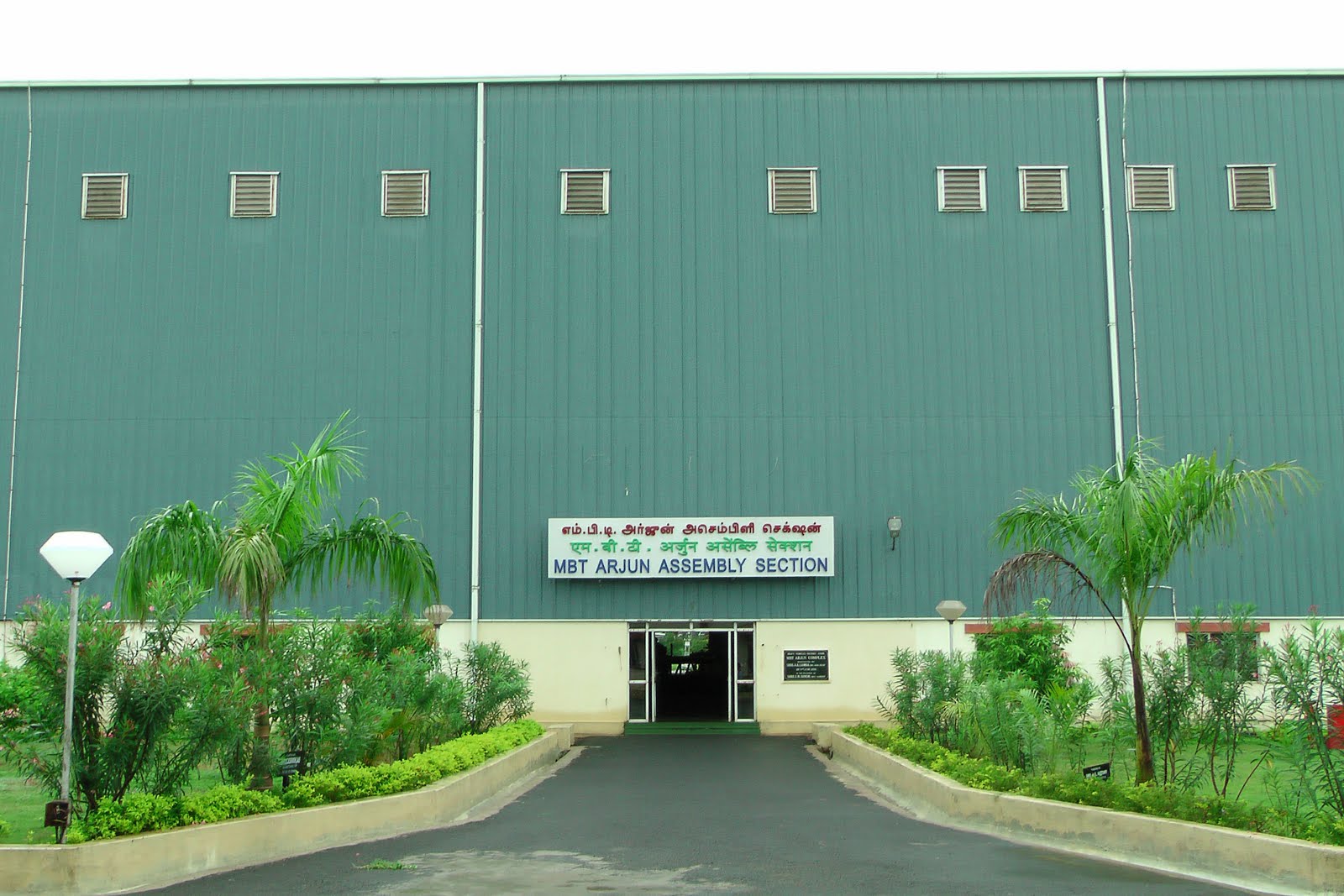 Where Arjun matured from a paper design to a formidable Tank. The assembly line at HVF, Avadi. Right next is CVRDE where Arjun was designed and developed.

In a recent report to the Parliamentary Standing Committee on Defence, DRDO has indicated that the army has rejected its request for mobility comparative trials between Arjun and T-90s. DRDO is of the view that these trails would have helped prove Arjun’s tactical and operational mobility aspects and also to define its operational role.

The army, however, has in its reply stated that Arjun and T-90s are of entirely different class and weight classification and their deployment is as per assigned operational roles only. Further, the army has said that Arjun being a heavy MBT has operational employment restrictions to specific sectors such as desert and semi desert and any comparative trials would be met with no results.

For decades several reports by multiple agencies have come down blaming the army, specifically the ‘Mechanised Forces’ for the Arjun fiasco. These reports observe that while the army kept buffering Arjun for more advancement, an opportunity to make use of a reliable platform itself was lost. Also, the army noted problems throughout the tank’s development and failed to play an active role in the developmental cycle.

Men from the Army’s 43rd and 75th Armoured Regiment which operate Arjun tanks themselves have given it full marks. Today, Tank Man of these regiments steadfastly back Arjun and have termed it one of the best MBTs in service. Several top military men who once served at the DGMF echo these views.

The army instead of negotiating for successive developments could have opted for spiral development thus efficiently making use of the indigenously built platform. This would have emerged as a win-win situation for all stakeholder involved in the program. Incubation of the technological knowledge, the ecosystem and the vendors could have taken India’s capabilities in tank manufacturing to a new level over the years. 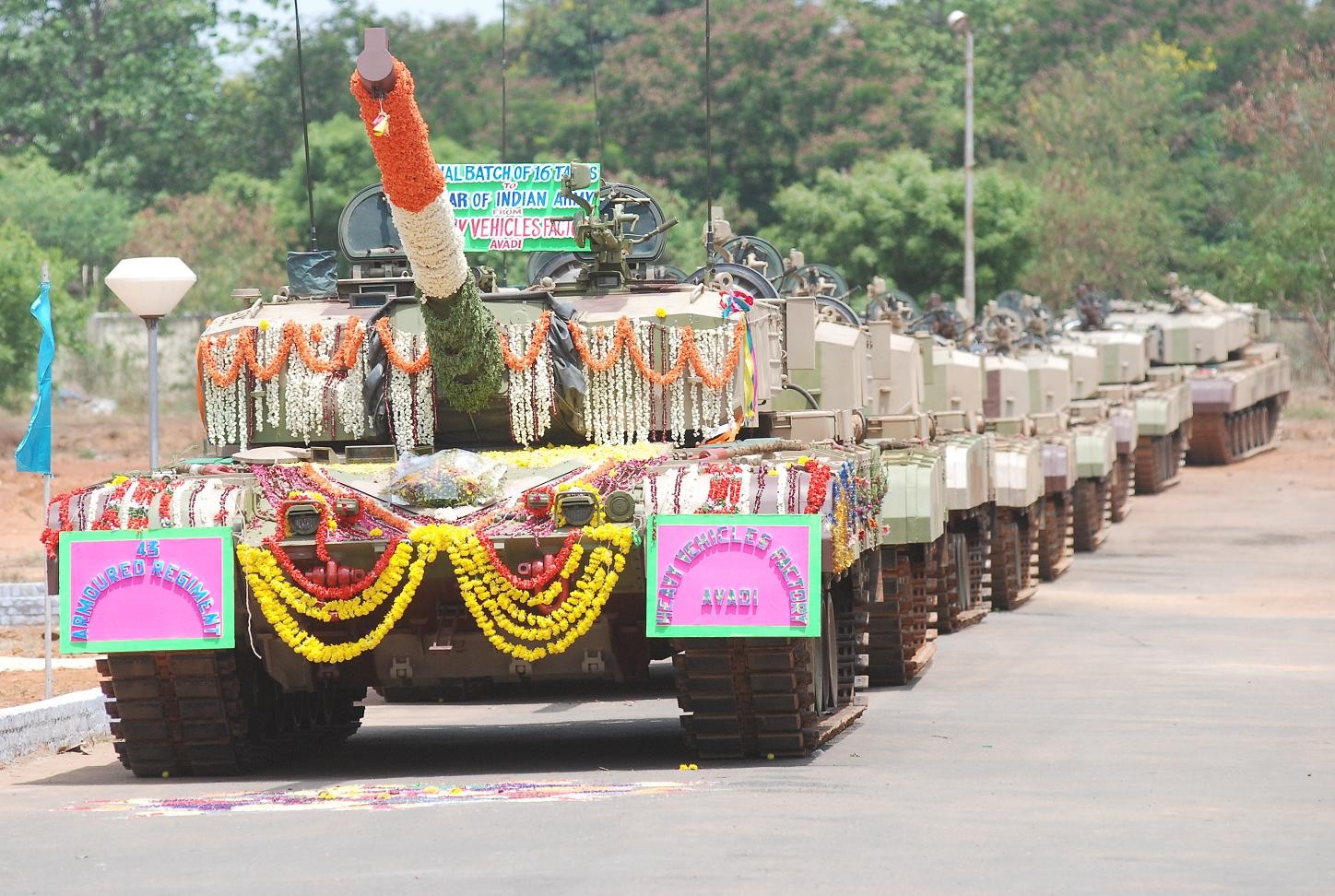 What remains evident is that Arjun has come-off ages. A tank which was once criticized for its weight and reliability issues today stands as a formidable MBT matching several “world-class” tanks. Further backing by its end user would have only bettered the platform. Will the Army ever commitment to the program and opt for further tanks is a topic that will gain clarity only after DRDO rolls out the Mk-IIs for full-blown user trials.