PM Modi’s historic visit to Israel marks the rise of a new dawn between the strategic partners. 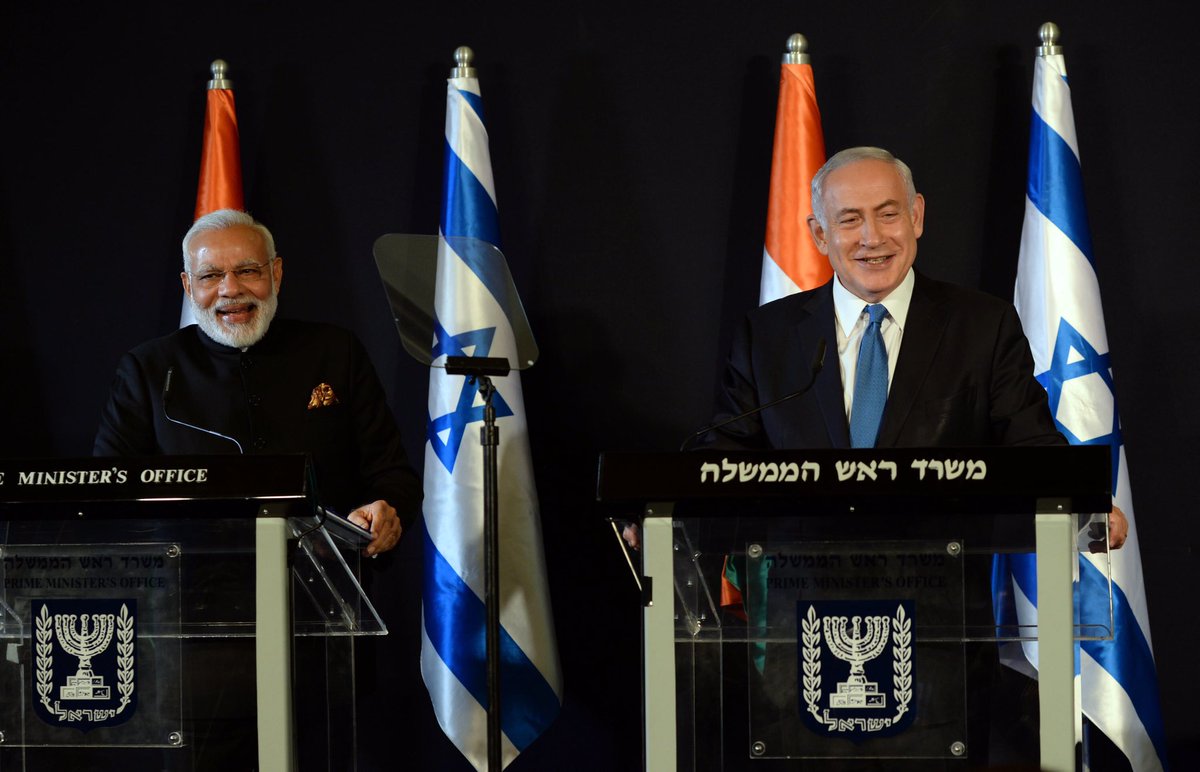 Marking a new high in the Indo-Israeli relations, Indian Prime Minister Narendra Modi and Israeli PM Benjamin Netanyahu, agreed up on elevating their country’s bilateral relationship to strategic levels to enhance the co-operation shared amongst them. PM Modi, the maiden Indian state head to visit Israel, toured the West Asian country on a three day visit to commemorate the 25th anniversary since the establishment of the relations.

PM Modi, who arrived in Israel on 4 July 2017, throughout the visit chaired several high-level delegation meets and also one-on-one dialogues with Israeli leaders in an effort to broaden the Indo-Israeli bilateral ties. India and Israel, ever since the establishment of the relations in 1992, have walked hand-in-hand to cater to their mutual demands and concerns.

PM Modi’s visit to the West Asian country, which had been in the making for over three years, has helped in increasing the deep tryst between the partners. The Joint Statement issued by the Prime Ministers stand testimony to this as the countries have mutually agreed up on implementing initiatives and policies that would reflect the goals and aspirations of both the nations. They also agreed to widen their collaborative endeavours in the field of Research and Development (R&D), technology, innovation, entrepreneurship, defence and security.

PM Modi and PM Netanyahu, following several closed door meetings, have agreed to enhance the relations to strategic levels, especially, the robust defence and security co-operation the countries share. During the visit both the leaders made a vow to fight against the dreaded common enemy – terrorism – through increased internal security co-operation and dialogues.

The visit, which is being viewed as a watershed moment in the relations, is expected to hurl a new dawn, especially, in the defence co-operation after the countries ratify the policy frameworks worked out during PM Modi’s visit. Even though the Joint Statement made little reference to the defence co-operation, it is no doubt that the issue took front seats in the closed door meeting between the leaders. 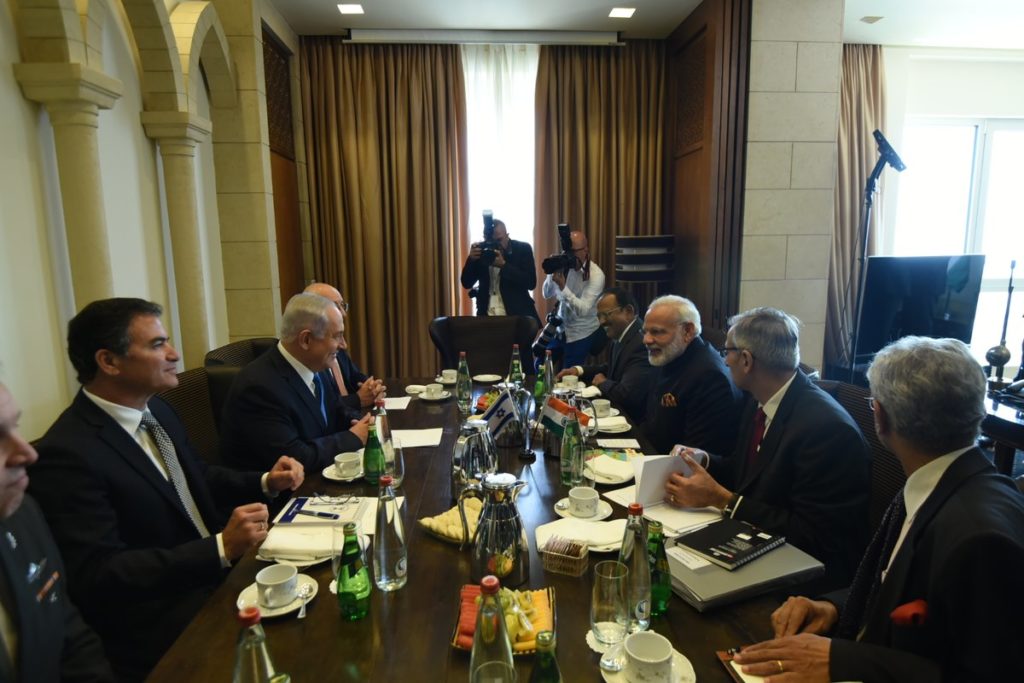 Both the Prime Ministers chair a joint working meet in the city of Tel Aviv.

PM Modi, up on his arrival to Israel, had said “My visit marks a path-breaking journey of engagement. As we march together, a strong and resilient partnership with Israel will be my intent and focus. Alongside building a partnership for shared economic prosperity, we are also cooperating to secure our societies against common threats such as terrorism.”

Recognising the responsibilities the countries share in mutually guarding the global peace and stability, PM Modi had said, “We need to secure our societies, define space for convergent action between us. We also want to put in place a robust security partnership to respond to shared threats to our peace, stability and prosperity.”

Israel, a small yet powerful country in the troubled Middle Eastern region, has overtime emerged as one of the biggest supplier of military hardware to Indian forces. Israel currently stands second only to Russia and the United States of America (USA) in catering to the demands of India’s armed forces.

The robust Indo-Israeli defence partnership dates back to the 1962 Indo-Sino war and the 1971 India-Pakistan war, when Israel supplied Indian forces with some of the most crucial ammunitions. An unseen helping hand, the Israeli involvement, turned the tides in India’s favour by enabling the country’s armed forces for countering the brutal onslaught by its neighbours.

Ever since the countries set-up formal bilateral relationship in 1992, the defence co-operation between them is surging ahead with renewed pace. It was, in fact, Israel that added striking tooth to IAF’s (Indian Air Force) frontline fighters during the Kargil episode, after several global OEMs (Original equipment Manufacturer) rejected India’s urgent demands for precision munitions, citing a self-declared export embargo.

By 2002, the countries drafted a robust military and strategic co-operation agreement to address their mutual security concerns in the region. Since the millennium, multiple administrations, which have taken reins of the power seats at both New Delhi and Jerusalem, have worked effortlessly to strength this unique relationship in an effort to answer their mutual concerns. 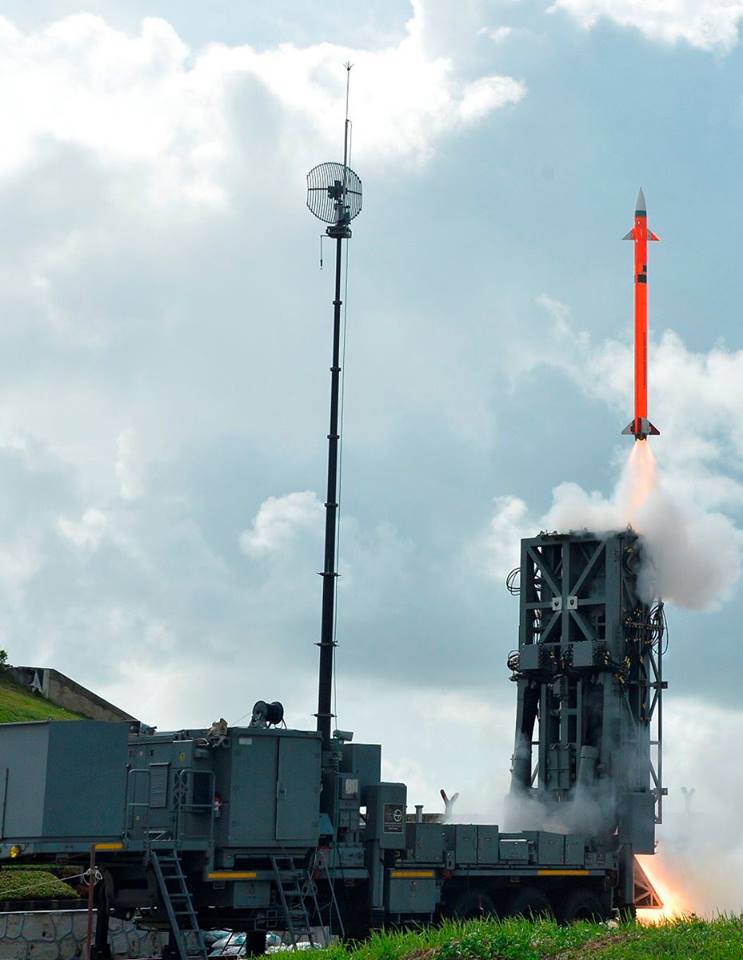 Ranging from advanced radar systems to sophisticated Unmanned Aerial Vehicles (UAV), today, Israel has provided India with some of the most strategic and decisive war making and enabling platforms. These complex yet crucial military hardware, which have enabled India to maintain unmatched deterrence levels along its borders, had been steadfastly denied to India even by its trusted defence partners such as Russia and USA.

A time tested partnership, the Indo-Israeli defence relationship, has successfully transformed from a simple seller-buyer relationship to a robust partnership, where the partners are actively involved in co-development and co-production of several cutting edge battlefield technology.

The elevation and ratification of the current defence co-operation shared with Israel is critical for India as it drives towards modernising its armed forces in an effort to address the increasing security concerns along multiple operating theatres.

Through sustained transfer of complex technology, Israel has strongly backed Indian government’s ambitious ‘Make in India’ initiative, through which the NDA government plans to make India self reliant in defence equipment manufacturing. Israel’s leading aerospace and defence technology solution providers have partnered India’s public developmental agencies and also private industries to locally manufacture some of the most sophisticated battlefield technology.

Ranging from point-defence missile systems such as the MRSAM and LRSAM systems to the most advanced AESA radar systems, Israeli origin weapon systems are revolutionising the capabilities of Indian forces. While, India was introduced to the concept of UAV systems only through Israeli origin Searcher drones, the country will yet again begin a new chapter in the drone usage when it receives the Heron – TP armed drones. 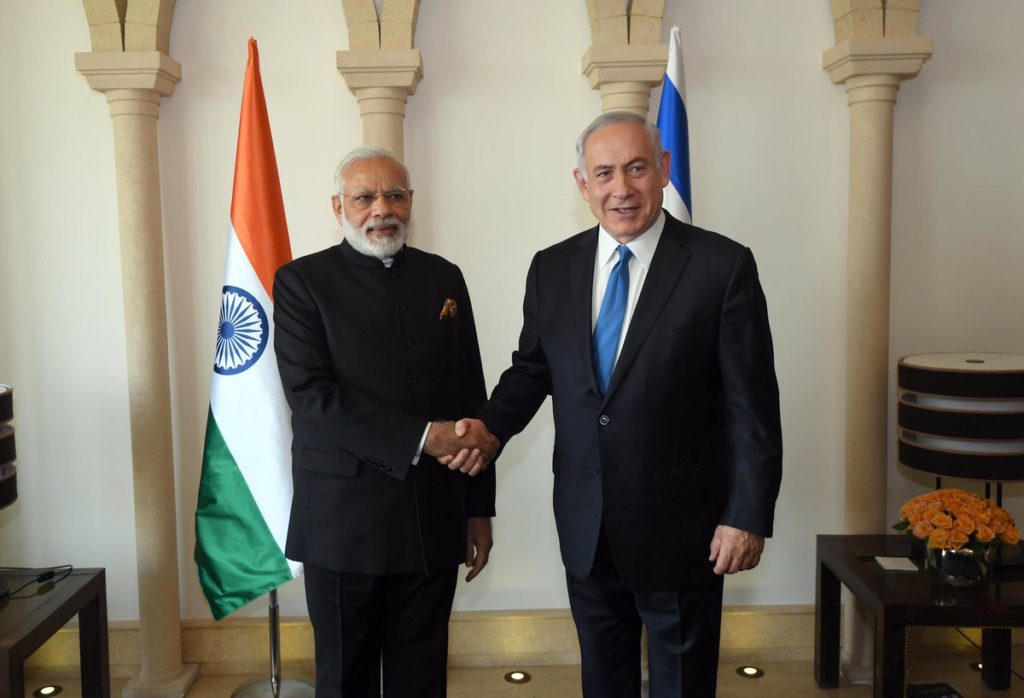 If India has to catch up with the Communist power – China –  it is critical to strength the co-operation with Israel, which at various instances has waded through turbulent waters to provide India its requisite needs. India’s indigenously developed Ballistic Missile Defence Systems (BMDS) was realised only after Israel co-developed a LRTR (Long Range Tracking Radar) with DRDO much to the dismay of America. The free flow of strategic weapon technology between the partners speaks volumes about the trust they share.

The Indo-Israeli defence co-operation, which has always evolved in the dark shadows, had failed to reach its zenith as the previous governments had struggled to keep a fine strategic balance between the ‘two state’ equation and the elevation of the relations with Israel. With PM Modi failing to mention either the ‘two state’ policy or the term ‘Palestine’ itself throughout his visit, the ground looks well set to chart a new dimension in the Indo-Israeli relations. A more robust and closer relation with Israel will only help India’s strategic interest even as the country gears up to be a true global power.