Modernisation of the Indian Army 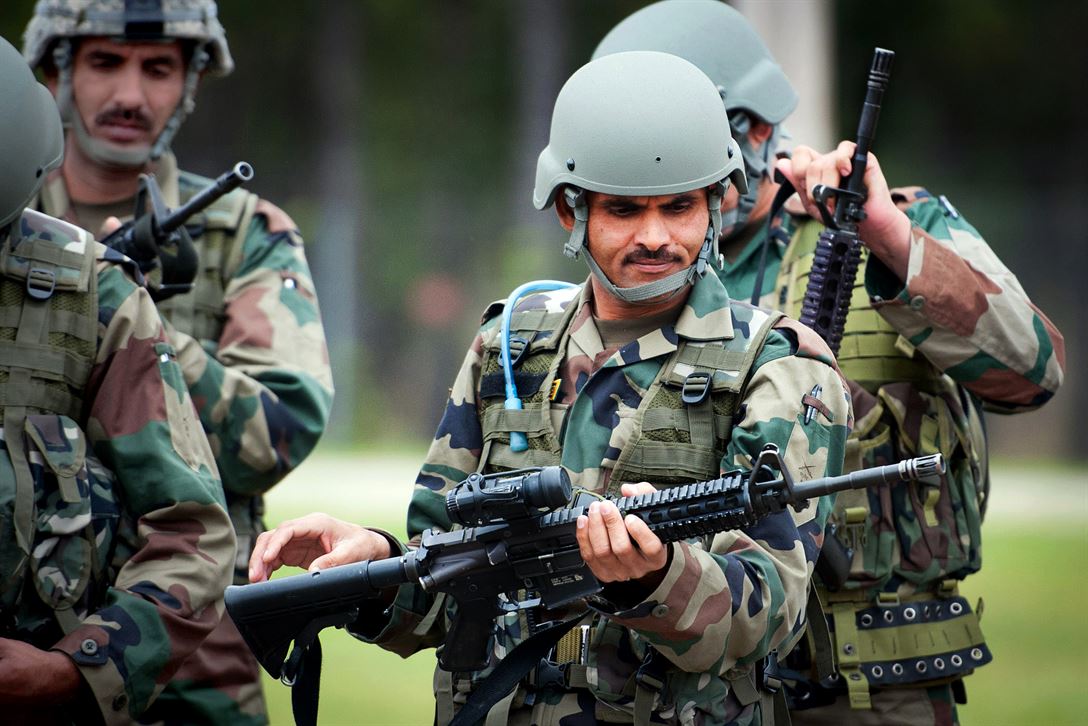 Skirmishes with two hostile neighbours, cross border terrorism and internally fuelled insurgency have, since independence, been the major taxing concerns for the Indian government in its quest to maintain peace and tranquillity. Combined together, these dreaded factions have skilfully attempted to strangle the very sovereignty of the country. As the tone of these skirmishes gain traction, along the Line of Control (LoC) and Line of Actual Control (LAC), it crucial that the Indian Army, which is in charge of guarding the country against these threats, is armed adequately to effectively counter these threats.

The Army has actively been pursuing programs to synergise its combat arms to adequately arm them to sustain at least 10 days of intense battle. Since the past decade it is also evident that the battlefield has progressively transformed to unconventional threats, meaning the country’s future conflicts will not be effectively with state actors, but will be with non-state and proxy forces. This effectively endorses the two and half front conflict scenario and thus calls for rapid and time bound modernisation of the Army.

Modernisation of the Infantry

Termed the ‘queen of the battlefield’, Infantry remains to be the most significant component for the success of any land combat force. With over 450 infantry battalions at its disposal, the Indian Army has, since independence, been an infantry predominant force. Infantry men form almost 50% of the Army’s total strength and serve as the country’s first line of protection against a varied sect of threats.

The modernization of the infantry, which had been in a limbo for years, is now gaining pace. The modernisation, being widely drafted around Model – 4B (Modified), is being mooted to make the arm not a equipment-centric arm but a capability-centric arm. Chief of Army Staff, General Bipin Rawat, recently briefing the media about the modernization programs for the infantry had said “Modernisation of infantry is a priority. Infantry is getting its share of importance, the force this year will be getting Assault Rifles, Missiles, Snipers and modern communication systems, besides vehicle and reconnaissance systems.’

The Infantry has already received the first tranche of modern bullet proof jackets as part of the order for almost 1.5 lakh BJPs. MKU, an Indian manufacturer, has also started the supply of boltless helmets to the Army.

As far as the weapon systems are concerned, the Infantry will this year induct more than 70,000 Assault rifles as a stop-gap measure. Army sources have indicated that the weapon system being procured is the SIG Sauer manufactured SIG 716 7.62X51 mm assault rifle. These weapon systems will be made available to the forward deployed troops under the Northern Command, who are involved in combat with non-state actors in the J&K Valley. The Army is also scouting for an additional 2,00,000 assault rifles, which are expected to be procured from global manufacturers under ‘Buy and Make’ program.

Further, the Army has also procured several hundred snipers from Barrett and Beretta to equip the troops under the Northern Command. COAS Bipin Rawat recently revealed that these rifles along with their .50 and .338 mm ammunition have already started making way to the frontlines. While these snipers were procured under the Army Commander’s Special Financial Powers, the Army is also scouting for additional 5,000 snipers to meet the requirements of the entire Army.

Further, a program to acquire at least 95,00 CQB (Close Quarter Battle) rifles, which are crucial in urban warfare, is also underway. The RFI, which was floated early last year, has received response from Thales and MKU offering their F-90 carbines, Dubai-based Caracal and IWI with Punj Llyod for Tavour CQBs.

To increase mobility, the Army is replacing the old Gypsys with Tata Safaris, which are comfortable and bullet proof vehicles (BPV). Large number of BPV and MPV (Mine Protected vehicles) are also being procured by the Army. To increase operability in the battlefield, newer and modern radio sets, specially those which are software defined, are being procured.

In the  battlefield, the artillery with capabilities of providing sustained firepower, is a crucial force multiplier. This capability of the Arm is a boon to forward deployed ground assault troops, who are tasked with overtaking fortified enemy locations. Artillery has traditionally been tasked with surveillance, target acquisition, target degradation and also post damage assessment missions.

Since the onset of the millennium, the Army has actively pursued the modernization of its artillery arm under the Field Artillery Rationalization Program (FARP). Under FARP, the army is planning to acquire at least 2820 howitzers, making it one of the single largest armed forces modernization program ever pursued.

In FARP, a bulk of the procurement would be the ‘towed artillery gun’ system, which are essential force multipliers in the plains and the foothills. The Army has set course for procuring at least 1,510 towed guns under the ‘Buy and Make’ category. While 400 systems are to be sourced directly from a global manufacturer, the rest are to be manufactured locally here in India by the OEM with an Indian partner. With French based Nexter in partnership with L&T and Israel-based Soltam System (a subsidiary of Elbit) in partnership with Bharat Forge have offered their guns, the Army is scrutinising the final contours of the program.

The Army for meeting the requirement of towed gun systems is also relying on the indigenously manufactured ATAGS and Dhanush Howitzers, following stellar performance by both the systems during their testing phase. While the first lot of Dhanush howitzers are set to be inducted to the force by March, 2019, the ATAGS are expected to enter service by the year-end.

Army’s tender for procuring about 814 Mounted Gun System (MGS), which are crucial in mountains, is moving ahead with the Government working on issuing the Acceptance of Necessity (AoN), officially kicking off the tendering process. Being handled under the ‘Buy and Make’ category of DPP, 714 guns are to be manufactured in India and the rest 100 are to be imported in a build-to-operate format. For the INR 15,000+ crore tender, BAE system and Mahindra consortium fielded FH-77 BW L52 Archer system is competing with Nexter and L&T fielded Ceaser gun. Indian giant Tata SED has also jumped into the fray with its own system, which the company claims to feature close to 52% of indigenous components. Bharat Forge is also expected compete for the tender with a system that will be derived from Soltam Systems. The tender is expected to be given a shove by the MoD before the onset of the General Elections.

After being deprived off artillery pieces for almost three decades, the Indian Army tasted success in its efforts to add teeth to the regiment, when the Army on November 9, 2018 inducted the K-9 Vajra SP (Self Propelled) and M-777 UL (Ultra Light) Howitzers. The K-9 Vajras are being inducted as part of a tender concluded with Hanwha Techwin and Larsen and Toubro for 100 such Self Propelled Howitzers. These platforms are crucial to support armoured columns and strike formations during their surge into enemy territory. The contract for M-777 howitzers was concluded with US-based BAE systems under the FMS route and is to arm the Army with 145 such systems. These ultra light howitzers are crucial to support Infantry’s operations along the mountainous terrain and will be a part of the Mountain Strike Corps (MSC) being raised to counter the growing Chinese threat. The combat arm is also set to acquire additional regiments of the BrahMos Supersonic cruise missiles in this Fiscal Year.

Modernisation of the Armoured Regiment

At the core of Army’s disputed ‘Cold Start’ doctrine, are proposals to launching blitzkrieg  strikes against Pakistani positions in case of provocations from across the border. Two vital elements for attaining success with these proposals are Mobility and Fire Power. No other arm of the Army, except the Armoured Regiment, can guarantee these elements, which are vital to decide the outcome of any conflict. Having mastered both these elements, the Arm is a true force multiplier for the Army on the battlefield. As the Army braces to come in terms with the two and half front conflict situation, the modernisation of this vital arm has taken due importance.

The mainstay of the Armoured regiment are the Main Battle Tanks, which are true enemy slayers. The Army’s MBT fleet is currently constituted around the Russian-origin T-90 and T-72 tanks. The indigenously manufactured Arjun MBTs have also been inducted in small numbers .The Army has for years been pitching programs to modernise this arm, but with limited success. The Army wants to transform the Arm into a true capability centric arm and not one which is packed with mere numbers.

To realise this, the Army has been lobbying hard to procure at least 464 additional T-90 MBTs from Russia, which are to be manufactured in India by HVF, Avadi. But this proposal has met with stiff opposition from indigenous players, who want the Army to acquire the indigenously designed and developed Arjun Mk-II in mass numbers. This argument holds ground as Arjun has outpoven the T-90 in successive comparative trials. But, the Army has its share of concerns with Arjun and now wants DRDO to drastically trim down the weight of the platform, even as newer technologies are being strapped on them to meet the user requirement. With a large part of the T-72s now being deployed along the Northern and Eastern fronts, there exists a large deficit in the plains and the deserts.

Another major concern for the Armoured regiment has been that a large part of the tanks have been left blinded in the night. Even the latest T-90s are being procured with limited night fighting capabilities. The T-72s themselves are also being modernised to be capable of operations in all-weather night capabilities.

As part of its mandate to be capable of fighting wars of the future, the Army under it’s FRCV (Future Combat Ready Vehicle) program, an umbrella program to procure future combat vehicles, has drawn plans to induct the FMBT (Future Main Battle Tank) to its platform. It will be these platforms that will be replacing the T-72 tanks in the future.

As India’s war, with state and non-state actors, rapidly spreads to the mountains and to the urban terrain, it is crucial that its infantry, who are at the business end of these conflicts, there is a pressing need that they are better protected from the hostile forces. Towards this end, the Army has been inducting the Soviet-era Sarath ICV (Infantry Combat Vehicle) platforms.

But as India’s enemy forces reinvent themselves, it is crucial that the Army also reinvents its tactics. Armour for the infantry takes precedence over all. To replace the outdated ICVs, the Army has drawn up the FICV (Future Infantry Combat Vehicle) program. However, there has hardly been any progress with the FICV program, since its introduction. While the private industry and DRDO have come up with several offers, the Army and MoD (Ministry of Defence) have failed to float a comprehensive procurement model for these platforms.

Even MoD’s efforts to route the program through the Make – II initiative have failed to yield results. The MoD and Army remain at loggerheads over deciding the financial module for the program. While the MoD wants the user – the Army – to fund a part of the developmental efforts by the Industry, the Army remains reluctant, citing the truncated financial outlays. It is crucial that the MoD and the Army work in unison to address these concerns and see through this crucial program at the earliest.