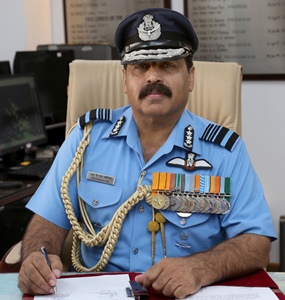 It is reliably learnt that the Government has entered the last mile in the process for the selection of the next Chief of the Army Staff (COAS) and Chief of  the Air Staff (CAS). While the current COAS General Bipin Rawat is set to retire in November, the CAS Air Chief Marshal B S Dhanoa will complete his tenure at the helm in October. While the Government had for years maintained the practise of announcing the names of incumbent chiefs months in advance of the actual appointment, there is no such advantage in the case for appointment of the CAS.

As part of the appointment process, the Ministry of Defence (MoD) is learnt to have already forwarded the file to the Appointment Committee of Cabinet (ACC) headed by the Prime Minister. It is believed that the MoD has recommended the names of at least four senior-most air officers to ACC for appointment as the CAS.

The fray, according to reliable sources, is lead by Air Marshal RKS Bhaduria, who is currently the Vice Chief of the Air Staff (VCAS). By virtue of seniority, he remains to be the most obvious choice for appointment as the incumbent CAS. In contention alongside the VCAS for the appointment to the top post are Air Marshal Balakrishna Suresh, Raghunath Nambiar, Harjit Singh Arora and Rajesh Kumar.

Interestingly, Air Marshal RKS Bhaduria, the current VCAS, is set to retire on the same day as Air Chief Marshal B S Dhanoa. Unless he is officially appointed within the timeframe, he will lose his ground for the appointment. However in case of appointment he will receive a minimum two year extension.

Marshal Bhaduria is a celebrated officer in the Air Force. Having inducted into the fighter stream in 1980, the Air officer has clocked more than 4000+ hours of flying experience across multiple platforms. A revered experimental test pilot, it was under his watchful command that the indigenously developed LCA Tejas took wings and defined its flying envelope at the National Flying Test Centre (NFTC). Marshal Bhaduria is also a Cat ‘A’ qualified flying instructor, who through the course of his command has been Air Officer Commanding-in-Chief (AOC-in-C) of the Southern and Training Commands. He was also an integral part of the Air Force’s negotiating committee for acquiring 36 Rafale off-the-shelf from the France under a Government-to-Government (G-to-G deal). In recognition of his service, the Rafale aircraft carry his initials ‘RB’ as prefix to their tail numbers.

In close contention with the Vice Chief is Air Marshal Balakrishna Suresh and Raghunath Nambiar. Marshal Suresh is a revered fighter pilot who has flown a variety of fighter aircraft and has commanded the Thiruvanthapuram-based Southern Air Command. While the air officer has not commanded any operationally sensitive commands, he has been the commandant of the Tactics and Air Combat Development Establishment (TACDE), the Air Force’s Top Gun school.

The Government is said to be also favouring appointing Air Marshal Raghunath Nambiar, who currently heads the Air Force’s sensitive Western Air Command. It is under his watch that the Air Force has maintained a high alert since the Balakot air strikes. Marshal Nambiar had been handpicked by the Government to replace the retiring C-in-C Western Air Command Air Marshal S Harikumar only days after the Balakot air strike even as tensions simmered with Pakistan.

Marshal Nambiar is a Kargil veteran, who flying the Mirage – 2000 aircraft had bombed Pakistani fortified positions in areas around the Tiger Hill. He has been actively involved in the Rafale program and has already flown the state-of-the-art fighter in France. Having commanded both the operationally sensitive Eastern and Western Commands, puts Marshal Nambiar on an undeniable strong ground.

Also in contention are Air Marshal H S Arora, who currently heads the Gandhinagar-based South Western Air Command. Commissioned into the fighter stream in 1981, Marshal Arora has flown almost every fighter that is in current service with the Air Force. Trailing him is Air Marshal Rajesh Kumar, who currently heads the Prayagraj-based Central Air Command. A fighter pilot and qualified Cat ‘A’ qualified flying instructor who has led both of the Air Force’s AWACS and Tejas design and development team.

Process for Selection of COAS to be soon Kickstarted.

The MoD is also learnt to have already shortlisted names for the selection of the next COAS following the retirement of the current chief in November. In accordance to the ‘Line of Succession’ leading the fray would be Lt Gen M M Naravane closely followed by Lt Gen Ranbir Singh and Lt Gen S K Saini.

Lt Gen Manoj Mukund Narawane, who is the current Vice Chief of the Army Staff, is largely expected to be appointed the next COAS. The Government had in October, 2018 moved out Lt Gen Abhay Krishna, the then General Officer Commander-in-Chief of the Eastern Command, to move Lt Gen Naravane from the Army Training Command (ARTRAC). The appointment of Lt Gen Naravane to the ARTRAC in December, 2017, even though he was one of the senior most officers and in contention for the top post, had effectively denied him command of an sensitive operational command. The command of either of the three operational commands is believed to be a key precursor to the elevation to the top most.

Trailing the VCOAS is Lt Gen Ranbir Singh, the current General Officer Commander-in-Chief of the operationally sensitive Udhampur-based Northern Command. It is under his watchful command that the Army is leading its charge against terrorists and infiltrators along the troubled LoC. Having commanded the I Strike Corps, the General officer is famous for his posting as the Director General Military Operations (DGMO) during the much talked about Surgical Strikes mounted as a retaliation to the Uri attack in September, 2016.

Lt Gen S K Saini, the current General Officer Commanding-in-Chief of the Pune-based Southern Command, is also in contention to the top post. A celebrated infantry officer, Gen Saini is an expert in anti-insurgency operations. Besides leading the Kilo Force of the Rashtriya Rifles and a mountain brigade, he also commanded the IX Corps.