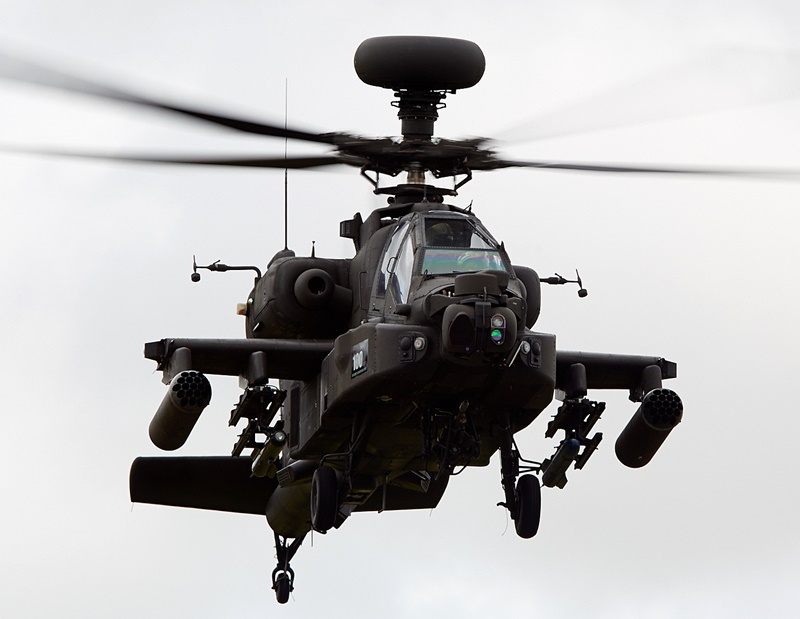 In a significant boost to the Indian Air Force’s (IAF) strike capabilities along the Line of Control (LoC), the Indo-Pakistan border area, the IAF on 03 September 2019 formally inducted the AH-64E Apache Attack Helicopter into its inventory at Air Force Station (AFS) Pathankot. The Apache helicopter are being imported from the US to replace the aging Mi-35 fleet, which served as the Air Force’s spearhead in anti-tank and ground support operations, under Foreign Military Sales (FMS) route.


Air Chief Marshal BS Dhanoa following the induction ceremony said “Apache attack helicopters are being purchased to replace the Mi-35 fleet. Alongside the capability to shoot fire and forget anti tank guided missiles, air to air missiles, rockets and other ammunitions, it also has modern EW capabilities to provide versatility to helicopter in a network centric aerial warfare. Apaches have been an integral part of numerous historic campaigns worldwide. These aircraft have been modified specifically to suit the exacting standards demanded by IAF. I am happy to note that the delivery schedule is on time with eight helicopters already being delivered.”

The addition of Apache Attack Helicopter is a significant step towards modernisation of Indian Air Force helicopter fleet. This procurement will enhance the capability of IAF in providing integrated combat aviation cover to the army strike corps. The induction of these platforms into the ranks of the Air Force comes even as the IAF and the Army are involved in a fierce inter-services quibble over who gets to control the Close Air Support (CAS) platforms, such as the Apache itself.

The Apache themselves will be the last attack helicopters to be inducted into the Air Force, as the Minister of Defence (MoD) has in all certain terms made it clear that any further purchases of such platforms will be exclusively for arming the Army’s aviation corps. The Indian Army had time and again raised a requirement for armed helicopters to be deployed along the Western Theatre supporting the I, II and XXI Strike Corps, which have all been put in-charge of launching armoured offensives against India’s arch rival Pakistan in times of conflict. World over, all military doctrines dictate that land forces be supported by integral air power assets. US Army has traditionally  maintained that integral air-borne offensive power assets which works in lieu with the artillery will help in rapidly securing the battlefield for the infantry.

The delivery of the Apache attack helicopters to the Air Force is being handled as part of the September, 2015 $2.2 Billion contract between the Indian and US Government under the FMS route for 22 Apache helicopters and 15 Chinook CH-47F heavy lift helicopters. While the first batch of eight of Apache helicopter have been inducted, the Air Force remains confident about inducting all the remaining 16 Apache by March, 2020.

Besides the helicopters, US manufacturers have also delivered associated maintenance equipments besides the Longbow radar system and also the Stinger and Hellfire ATGM missiles, which promises to boost the country’s strike power along the border regions. The AH-64E variant of the Apache manufactured by Boeing is undoubtedly one of the most advanced attack helicopter to be ever in service. The ‘E’ variant of the venerable Apache are equipped with newer powerful engines and full IFR capability. Advanced avionic systems aboard the platform allows it to operate in networked warfare scenarios besides being able to remotely operate UAVs through dedicated and secured data links.

The helicopter is capable of delivering variety of weapons which include air to ground Hellfire missiles, 70 mm Hydra rockets and air to air Stinger missiles. Apache also carries one 30 mm chain gun with 1200 rounds as part of area weapon sub system. To add to the lethality of the helicopter, it carries fire control radar, which has a 360° coverage and nose mounted sensor suite for target acquisition and night vision systems.

These tandem seating helicopters are day/night, all weather capable and have high agility and survivability against battle damage. These are easily maintainable even in field conditions and are capable of prolonged operations in tropical and desert regions.

Operating in tandem with the A-10 Warthog CAS aircraft, the Apache have been lining of hope for US’ forward deployed pinned down infantry troops. The choppers have through US’ campaign in both Afghanistan and Iraq proved their reliability and prowess by striking an array of targets. Their ability to scout and huntdown enemy armoured columns, which was proved during the 1991 US-Iraq War, will come in handy to Indian forces to repel any armoured thrust by Pakistani armoured columns.

While the IAF is busy inducting these platforms, the Indian Army is set to finalise the INR 4,168 crore deal for 6 Apache helicopters with the US Government. The Army Aviation Corps’ case for these attack helicopters had been given the in-principle clearance by the Ministry of Defence’s (MoD’s) lead acquisition body, the Defence Acquisition Council (DAC), last year.

Interestingly the fuselage for these platforms are being sourced from Tata Boeing Aerospace Limited’s Hyderabad facility. The JV between Tata and Boeing has been transporting fully manufactured fuselages to Boeing’s AH-64 Apache manufacturing facility in Mesa, AZ, for integration into the final assembly line. The 14,000-square meter facility has emerged as the sole manufacturer of fuselages for the Apache helicopters.

Today, customers around the world operate more than 2,300 Boeing-made Apache helicopters since the aircraft entered production. The helicopter has been fielded or selected for acquisition by the armed forces of 16 countries, including India. The United States Army Apache fleet alone has accumulated more than 4.3 million flight hours, including more than 1.2 million in combat, as of January 2018.