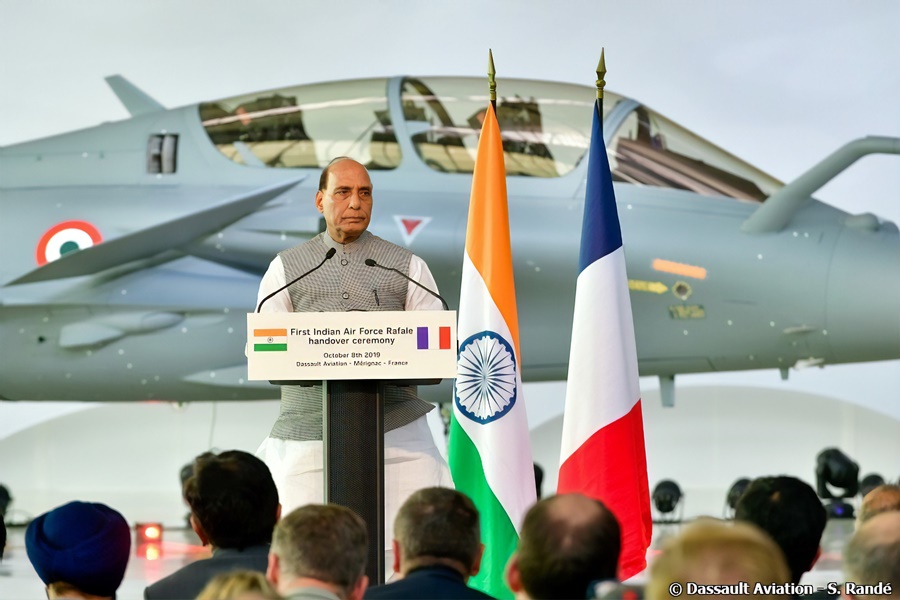 When in 1998 India tested nuclear devices under Operation Shakti – 98 and established itself as a nuclear state capable of weaponising and delivering the payload, the Western Bloc came down heavily on India with stringent economic and technological sanctions. Numerous developmental projects, which promised to revolutionise both India’s civilian and military domains, came to a sudden stand still.

In the midst of this brutal sanction onslaught, one country that remained steadfast against imposition of sanctions against India and even partially recognised India’s right to go nuclear was France. Led by Jacques Chirac, the then French President, France walked the extra mile by concluding an agreement with India, even after the nuclear tests, to elevate the bilateral relations to a strategic level, which incidentally became the first ever strategic bilateral agreement for India.

Ever since, the Indo-French strategic bilateral relationship has grown in leaps and bounds. Cornerstone to the growth of this strategic relation is the unmatched level of co-operation the countries share in matters related to defence and security. France has over the years established itself as one of the most after sought defence technology provider for India’s armed forces.

With the defence and security co-operation between the partners drastically strengthening, both the Governments at the highest levels in 2018 constituted an Ministerial-level annual review mechanism to further strengthen this key pillar of their strategic relationship. Constituted under the watch of the then Defence Minister Nirmala Sitharaman and her French counterpart Florence Parly, the defence dialogue mechanism was expected to effectively address the irritants plaguing the elevation of the relationship to newer heights. This mechanism was setup in lieu to the service-level staff talks and the High Committee on Defence Cooperation (HCDC) dialogue which meets annually at the level of Defence Secretary and the French DG of the Directorate of International Relations and Strategy (DGRIS).

In his effort to add further life into the strategic relation, Raksha Mantri Rajnath Singh embarked on an official trip to France between October 7-9 for the second annual defence dialogue with his French counterpart Ms Florence Parly, Minister for the Armed Forces.

His visit to France comes at a time when the bilateral relations between the partners are at an all time high. The Raksha Mantri is in France within months of the PM Modi visiting France for the G-7 Summit, where the PM held extensive dialogues with French President Emmanuel Macron. Both the state heads during the visit had rightly decided to further strengthen their defence and security co-operation.

Both the partners during the RM’s visit took a giant leap towards the realisation of this goal, when the French aviation giant Dassault Aviation handed over the 1st of the 36 Rafale fighter aircraft to Raksha Mantri Rajnath Singh. The delivery of the Rafale, which have been on the radar of the Indian Air Force for over a decade, marks the rise of a new dawn for the Air Force.

Signalling the significance of Rafale’s induction, the Raksha Mantri said “The new Rafale Medium Multi-Role Combat Aircraft (MMRCA) will make India stronger and will give a boost to its air dominance exponentially to ensure peace and security in the region.”

The induction of the Rafale, which is considered to be one of the best fighter aircraft in its class, seems to have set a new trajectory in the strategic relationship. The French Defence Minister also drew upon from the induction of the Rafale aircraft to signify the expansion in the relations. Speaking about France’s growing trust in India as one of its closet allies, who is being provided with the latest technology be it in the air or under waters, Ms Parly said “Th[e] reciprocal choice we made [in India], nothing embodies it better than the Rafale. Because what is the Rafale? It is the best of French technology that my country puts at the disposal of India.”

France has truly revolutionised warfare for Indian armed forces. The country over the decades has provided Indian forces with the latest and some of the most advanced weaponry systems. While the Air Force greatly benefitted from the Mirage – 2000 fighter, which was instrumental in sealing the Kargil episode in India’s favour, the Navy has been reaping benefits from Program – 75, under which French-based Naval Group is manufacturing six modern diesel-electric submarines in India with Mazagon Dock Shipbuilders Limited (MDL). The induction of the Rafale now promises IAF to regain its lost aerial dominance in the region.

The Raksha Mantri’s high-level delegation has thus tried to push India’s agenda for the need of advanced weapon systems. French aerospace and defence companies remain in contention to supply Indian forces with weapon systems worth at least INR 1,50,000 Crore, with some of the orders being labelled as the biggest tenders to have been ever floated in the defence industry.

While France has been successful in meeting with the stringent technological requirements raised by Indian armed forces and is willing to arm India with some of the most modern systems, India has been vying to encourage French manufacturers to increase their investments in the country and to setup designing and manufacturing facilities to realise its dreams of ‘Self Realisation’ in defence manufacturing.

The offsets clauses under the Government-to-Government (G-to-G) for the 36 Rafale at a cost of INR 56,000 crore had resulted in almost INR 28,000 crore being plowed back into India’s market by Dassault and other suppliers. The Program – 75 has empowered Indian shipyards to design and manufacture modern ultra-quiet submarines. Multiple Indian MSMEs have emerged as leading suppliers to these submarines and having proved their prowess, they have now been integrated with Naval Group’s global supply chain and are in a position to participate in Australia’s future submarine acquisition program.

Thus, through the course of the dialogue, the principles are learnt to have explored ways to strengthen the defence industrial partnership, which promises to elevate the relations between the partners. The Raksha Mantri speaking about the efforts, said “I hope this event [annual defence dialogue] will provide a traction to our pitch for ‘Make in India’ and will be equally beneficial to you [France] to engage with us [India].”

Recognising France’s prior support to India through the Rafale program, he said “I thank President Macron for his strong support to further intensifying our strategic partnership, especially in the defence sector, with India and for our ‘Make in India’ initiatives.”

He also encouraged French OEMs to utilise the two defence corridors in India in Uttar Pradesh and Tamilnadu, that were setup in 2017 to boost prospectus for ‘Make in India’. He also promised to offer attractive terms for investment in the corridors and emphasised that India remains open to exploring opportunities and co-production of high-end defence equipment not only for its forces but also to cater to the demands of other likeminded customers across the globe.

Ms Florence Parly acknowledged the Defence Minister’s request and emphasised the growth in the relations. France, more than any other country, understands this necessity. Drawing strokes from France’s investment through the Rafale deal, the Minister said “We are fully engaged in the “Make in India” initiative, as well as in the further integration of Indian builders into our global supply chains. This is the strength of industrial return, which will enable India to significantly strengthen its technological base and develop its skills.”

Make in India has been a success story for French OEMs compared to other global manufacturers. At least 60 French aerospace and defence companies have already began manufacturing activities in India, besides setting up Research and Development (R&D) facilities which promise to connect India with the future realm. French manufactures today in India are producing modern defence equipment such as reactors, helicopters, missiles and submarines.

For France strengthening India provides it with a two pronged gain. While French industries will gain access and foothold in the multi-billion dollar worth Indian industry and make fortunes from India’s surging economy, the strategic gains for France far out weigh the economic gains.