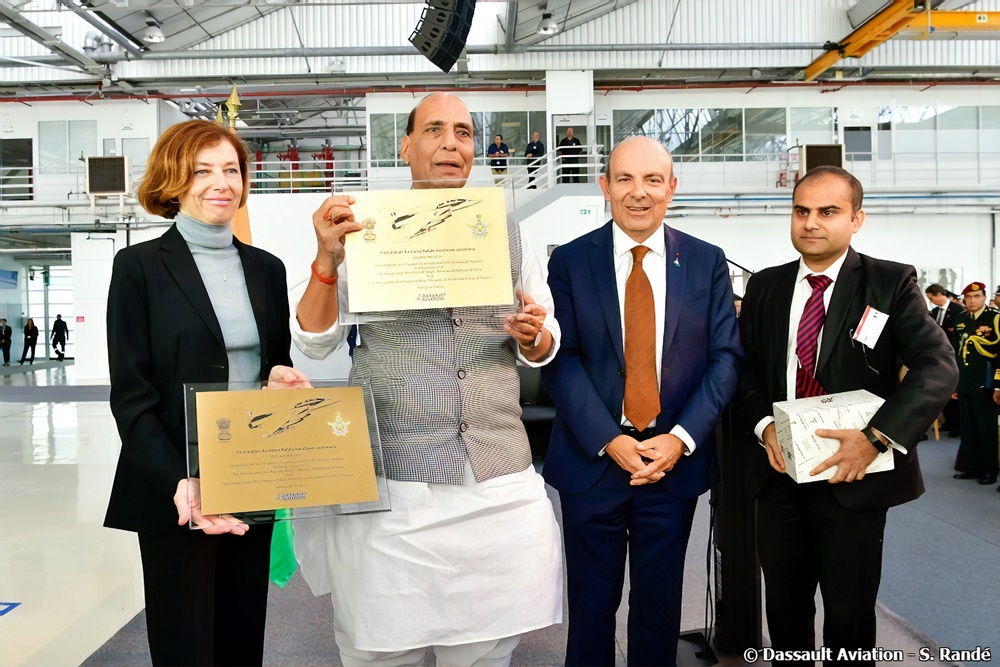 The Indian Air Force on October 8, 2019 celebrated its 87th Anniversary with much pomp and colour in Palam Air Base, New Delhi. The celebratory event showcased not only the sheer dominance and capabilities of the IAF but also traced its path since inception and modernisation in its capabilities over the years.

For the Air Force, the modernisation of its strike fleet, consisting of aerial superiority and ground attack aircraft, remain to be one of the most important missions. The Air Force for decades has pitched vehemently to rapidly modernise its fighter fleet to address the aerial risks of the 21st century.

The crucial mission of the Air Force received a shot-in-the-arm on its 87th Air Force Day as Defence Minister Rajnath Singh received the maiden Rafale fighter aircraft of the IAF from Dassault in France. The handing over ceremony, which was held at Dassault’s manufacturing facility in Merignac at France, witnessed the Air Force receiving the 1st of the 36 Rafale on order with Dassault. The delivery of the Rafale fighter marks the rise of a new dawn for the Air Force’s strike fleet.

Following the scrapping of the erstwhile MMRCA tender of the Air Force for 126 aircraft in 2015, in which the Rafale had been selected by the IAF, the NDA Government taking into consideration IAF’s case for emergency purchase, had inked a INR 58,000 crore deal with Dassault Aviation for the purchase of 36 Rafale aircraft under an Inter Governmental Agreement (IGA) with France.

Dassault Aviation, the OEM of the state-of-the-art aircraft, had during the conclusion of the order committed to delivering the first of the aircraft on order within 36 months. Much to the relief of the Air Force, the company has been successful in living up to the contracted timeline.

The Defence Minister speaking after the ceremony said “The new Rafale Medium Multi-Role Combat Aircraft (MMRCA) will make India stronger and will give a boost to its air dominance exponentially to ensure peace and security in the region.”

Elaborating on the purchase of the aircraft, he said “We do not purchase arms and other defence equipments to threaten any country but to increase our capabilities & strengthen our defences.”

Florence Parly, the Minister for Armed Force, on the occasion said “Th[e] reciprocal choice we made [in India], nothing embodies it better than the Rafale. Because what is the Rafale? It is the best of French technology that my country puts at the disposal of India.”

With the first of the 36 aircraft delivered, Dassault will work towards expediting the delivering of the first batch of at least 7 aircraft, which will arrive in India only after May, 2020. Until May next year, the delivered aircraft will be utilised for imparting advanced flying training to Indian pilots, who will eventually help raise the maiden Rafale squadron. The Air Force is expected to have the first full squadron consisting of 18 aircraft by February, 2021. The next batch of 18 aircraft will arrive in India by May, 2022.

Eric Trappier, Chairman and CEO of Dassault Aviation, speaking on the sidelines of the ceremony, said “I am particularly honoured to host this ceremony today as India is part of Dassault Aviation’s DNA. The long and trustful relationship we share is an undeniable success and underpins my determination of establishing for the long term Dassault Aviation in India. We stand alongside the Indian Air Force since 1953, we are totally committed to fulfill its requirements for the decades to come and to be part of India’s ambitious vision for the future.”

Dassault manufactured fighter aircraft have been an integral part of Indian defence forces for over six decades. The first Dassault Aviation aircraft, Toofani was supplied to India in 1953, followed by the Mystere IV, the naval Alize, the Jaguar and the Mirage 2000. These aircraft have contributed to Indian sovereignty all along and the Mirage 2000 fighter aircraft continues to be the IAF’s ‘cutting edge’ till date.

The Air Force on September 10 resurrected the Ambala-based 17th Squadron in preparation for the eventual operation of the aircraft in Indian colours. While the first squadron is to be raised in Ambala, the second squadron would be raised in Hashimara. The IAF with the OEM has already began construction process in the air bases for setting up necessary infrastructure and ground support systems. The Air Force has also deployed at least two dozen air officers to France for training purpose. While the first batch of 8 officers are already in France, the next two batches are expected to arrive late this year.

Representatives of Dassault, involved with manufacturing process of the IAF’s aircraft, have revealed that the first aircraft with India Specific Enhancements (ISE) would be ready for delivery and induction by 2021. Based on the Rafale’s F3R version, the aircraft for IAF will feature at least 18 ISE systems, which are expected to drastically boost the combat capabilities of the aircraft.

The aircraft on induction will be capable of firing the dreaded Meteor BVRAAM (Beyond Visual Range Air-to-Air Missile) system. Developed by France-based MBDA, the Meteor can obliterate aerial targets as far as 150 kilometres away. The Meteor has currently been integrated an operationalised only up on three combat aircraft – Typhoon, Gripen NG and Rafale.

The inter-governmental contract is also inclusive of General Purpose Long Range Standoff Cruise Missile (SCALP) systems, which has a stand-off range of at least 500 kilometers, thus allowing the aircraft to carry out strikes on strategic infrastructures, military headquarters and heavily-defended airfields, from far within friendly skies.