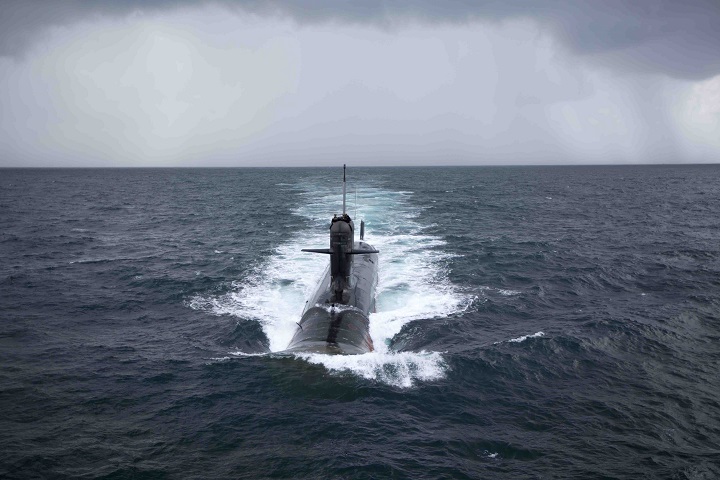 Indian navy, a formidable regional naval power in the Asia-Pacific waters, is in-charge of keeping a privy eye over some of the most contested waters in the Asian region. Changing geopolitical situation and increased enemy naval footprint close to its territorial waters has led the navy towards a path of rapid modernization.

India has enjoyed traditional control over the criss-crossing sea lanes of communication (SLOC) in the Indian Ocean Region (IOR). Also, the Indian navy has ambit control over several strategic choke-points, such as the Malacca and Sunda Straits and the Strait of Hormuz, through which almost 90% of the oil traffic between the West and East traverses. Control over these choke-points carry immense strategic value, as a naval blockade imposed up on one of these points will choke hostile Eastern countries off their essential supplies.

To enforce a fool-proof naval blockade, a naval force has to possess three main assets – Surface and under-water combatants backed by mean aerial platforms. Indian Navy, under its command has one of the most robust mixes of front-line battleships and an extremely efficient aerial force. The Indian navy under its command has 140 front-line battleships which it aims to gradually boost to 200 by 2027.

On the underwater front, however, the navy lacks credible punch to even guard its territorial waters let alone impose blockades on far flung chokepoints. Submarines are some of the most complex war machines ever built and are centric to the naval power posture of a maritime nation. With their stealth they provide unmatched control over hostile waters and are instrumental assets in naval warfare. No other platform can perform as efficiently as submarines in ISR (Intelligence, Surveillance and Reconnaissance) operations. Nuclear powered ballistic missile submarines have helped countries realize dreams of maintaining credible deterrence through their second strike capabilities.

The Indian navy currently operates fifteen conventionally powered and a single nuclear powered attack submarine. For India, submarines are critical to guard its vast coastline and to sanitize waters along its Exclusive Economic Zone (EEZ). The need has only been compounded given the navy’s increasing area of operations. Nuclear powered attack submarines or SSN’s remain the need of the hour to escort Carrier Battle Group (CBG)’s. The country in an effort to establish credible second strike platform is also pursuing programs to induct SSBN’s or boomers at the earliest.

Backbone to India’s under-water forces are the aging Russian built Kilo-class or Sindhughosh-class SSK submarines, which has an endurance of around 45 days. Complementing the Kilo-class submarines are the four German-origin HDW-built Type 209 submarines.  These submarines which were inducted in the late 80’s have well passed their service life and are staring towards imminent retirement, thus, leaving the navy toothless in guarding the country’s territorial waters.

In a recent report tabled before the parliament, the ‘standing committee on defence’ has raised serious concerns about the Indian Navy’s underwater force. The high-powered standing committee in its report has strongly noted that “It is very unfortunate that Navy has landed into such a critical situation where MRLC (Medium Refit Life Certification) of six submarines is the only available option to boost force levels.”

The MRLC program, under which a submarine is refitted with the latest technology and naval systems, is an extremely time demanding and technologically complex process. The MRLC program, which is being executed by Indian and OEM (Original Equipment Manufacturer) shipyards, will be completed only by 2021. In such a dismal scenario, it is very difficult for the navy to be adequately prepared for any eventuality.

A classified report prepared by the navy had stated that at any given time, a very minimal amount of the force is available for operations as most of the submarines are either under minor or major refitting programs.

The navy, in an effort to address the short fallings, had in 1999 drafted the 30-year submarine construction plan, under which navy envisioned to constructs 12 conventional submarines by 2012 in Phase – I and another 12 by 2024 in Phase – II.

Compounding India’s concerns is the increased induction pace followed by both the Chinese and Pakistani Navy in acquiring under-water combatants. While China has been largely successful in attaining desirable results in several of its indigenous construction program, Pakistan is all set to import at least 8 diesel-electric submarines from China. This increased tango between India’s hostile neighbours is further threatening India’s dominance in the IOR.

The Maritime Capability Perspective Plan (MCPP) 2012-27, under which the navy’s modernisation programs are being floated, envisages a force level of at least 18 conventional submarines. A study of the ground realities, however, raises doubts about the country’s capabilities in meeting this ambitious target.

The P-75 program, under which six conventional ‘Scorpene’ submarines are being built by DCNS and MDL, is at least four years behind schedule. Even though the program has enjoyed two major breakthroughs recently, navy’s problems are however far from being answered. INS Kalvari, and INS Kandheri are the only two submarines to have been successfully inducted to the force.

The Project – 75 itself is now at least five years behind schedule and the last of the submarines under the program are expected to be inducted into the force only after 2023. The Navy has also raised concerns about the effectiveness in the transfer of technology and strongly feels that the country was successful in absorbing only about 40% of the technology.

This has had a direct affect on Navy’s initial plans to acquire more Scorpene submarines from MDL’s line, as the failure to absorb technology and produce them here locally in India has meant that the cost of these submarines still remain high. While the Navy has since 2016 tried to place a follow-on order with MDL for at least 3 submarines, the proposal has met with stiff opposition from the MoD.

The Navy’s much talked about program, P– 75I, under which the force is to acquire six conventionally powered Indian built submarines, has struggled to make progress since the release of the EoI for the multi-billion dollar tender. While the MoD’s DAC approved the acquisition case in January, 2019 at an estimated cost of about INR 40,000 Crore, the ministry has been struggling to work the modalities for the strategic partnership model, under which the acquisition case is to be handled.

While the selection of the local partners, indigenous shipyards, is hanging fire as Hindustan Shipyard Limited (HSL’s) decision to form a JV with Adani Defence has left the Navy and DDP divided, the selection of OEMs has also been receiving lot of criticism. Sweden-based Saab, which was offering its A-26 submarine under P-75I, has decided to all but stay out of the tender, raising concerns about rights  and control over intellectual property. Saab representatives have raised serious concerns about the MoD’s decision to create Special Purpose Vehicle (SPV), which are to handle the program, with a 51:49% model. Saab strongly feels that in such a business model, where the OEM itself is a minority stake holder, chances of it losing control over its products and its efficiency are extremely high. Citing these reasons, Saab has already pulled back from the multi-billion dollar.

Further, minimal details are known about the progress the ‘ATV Project’ has made. While INS Arihant, the country’s maiden SSBN, was successfully inducted and even conducted its maiden deterrence patrol early last year, progress with INS Aridhaman, the second submarine being built under the program, is largely shorted in secrecy. Sources though point to the eventual induction of INS Aridhaman late this year.

Given the secrecy the program has been shrouded in, it is extremely difficult to confirm the details. The induction of these strategically important platforms remains the need of the hour, given the country’s decades of hunt for attaining credible nuclear triad capabilities.

The government has recently cleared navy’s much after sought program to manufacture at least six highly advanced nuclear powered attack submarines. These platforms are crucial to meet the navy’s increasing operational ambit and also to escort the Carrier Battle Groups (CBG), which serve as the power projectors.

The program is to be handled by Visakhapatnam-based state-run HSL shipyard. The design for the submarine will be sourced from Navy’s Directorate of Naval Design, which was also extensively involved in the design and manufacturing of the SSBNs under the ATV project. With India having already circumvented challenges under the ATV project, progress with this strategic project should not be a climb up the hill.

These challenges and concerns definitely paint a grim picture of the Navy’s sub-surface combatant fleet capabilities. While by 2024, the Navy will have six new submarines, acquired under Project – 75 in operation, the force on the other hand will be forced to being decommissioning activities to the ageing Kilo-class submarines.

While the response for the EOI floated under P-75I has been received by the MoD, the ministry is in a catch-22 situation as it battles to take forward the case. Even though some deft policy making might help ministry tide through the situation, the entire selection process itself is expected to take years. Followed by India’s dreaded negotiation process, the MoD will be in a position to conclude the contract only after at least 5-6 years from now. Meaning, the first of the submarines under the program will begin arriving well past a decade from now.

India, through the P-75 and ATV programs, has acquired substantial requisite technological knowledge and experience to manufacture stealth submarines. While MDL today is rolling out the deadly silent Scorpene submarines, the state-run Hindustan Shipyard Limited (HSL) under the secretive Shipbuilding Centre (SBC) is making forays into constructing state-of-the-art SSBNs. The budding private sector of the country, which has a strong footprint in both the P-75 and ATV program, is well prepared to meet the surging demands of the Navy. The Government needs to take proactive steps to tap into the existing expertise to either launch follow-on program or to hasten pace with the future acquisition programs.