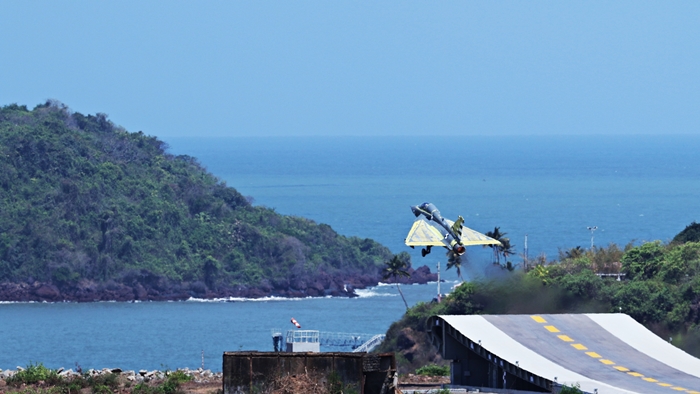 Sometime early this year, India’s sole aircraft carrier – INS Vikramaditya set sail on a crucial mission from its homeport – INS Kadamba. Much of the media was abuzz with reports that this was a strategic mission being undertaken by the Indian Navy in response to a joint trilateral naval exercise between China, Pakistan and Iran in the Arabian Sea. India has for decades been apprehensive of the growing tango between China and Pakistan, and strongly believes that this growing relationship will eventually give China a strong naval footprint in the IOR and Persian Gulf.

While the Carrier Strike Group was largely expected to sail deep into the Arabian Sea, anchoring just off the area where the three navies were exercising, INS Vikramaditya though, anchored just off the Karwar coast, about where calmer seas prevailed.

Though the deployment of the mammoth carrier was rumoured as for another strategic reason, the carrier was anchoring for an altogether different historic mission. The crew aboard INS Vikramaditya had been training for this mission for days now.

As the sun was about to set on January 12, 2020, an aircraft thundered off from the decks of the aircraft carrier and shot up to the dusky skies from Vikramaditya’s inclined ramp. No sooner had the aircraft steered away, the carrier erupted in celebration. Takeoff of an aircraft from the decks of the carrier was no doubt a new affair for the crew of the Navy’s flagship, it was in fact a mundane clock work for many. But today’s launch was being celebrated with pomp as history had been scripted in golden words for the country’s aviation industry.

INS Vikramaditya, on that eventful day, had been witness to the maiden ski-jump take-off of the indigenously designed and developed Light Combat Aircraft (LCA), effectively being part of the history. Piloting the naval version of the LCA – dubbed the NLCA – Commodore Jaideep Maolankar had firmly throttled India and her aviation industry into the history books. Only the day before (January 11,2020), Commodore Maolankar, an experienced and revered test pilot, had successfully conducted the maiden arrested landing of NLCA aboard INS Vikramaditya.

The successful completion of the landing and take-off cycle of the NLCA aboard the carrier, marked a major milestone in the country’s LCA programme, which has often been criticised and associated with delays. It was also the culmination of tedious efforts for Cmdr Maolankar’s team, which had for days, been conducting several low passes and risky touch and gos, in preparation for the historic landing.

Success for the program has in fact been coming in heaps as the program has progressed rapidly in the last year. While the flight of the NLCA was almost virtually suspended for a lengthy eight months in 2018, a lengthy test phase began in 2019 for proving the aircraft’s capabilities in conducting arrested landing abroad the carrier at Shore Based Test Facility (STBF) in Goa. These crucial mission waypoints were achieved in September, 2018, when NP-1 successfully conducted arrestor-cable assisted landing in STBF, depicting conditions abroad a carrier. Since then, teams at ADA were pushing for the operations from the carrier, as they had grown confident of the aircraft’s prowess.

The landmark event has showcased India’s prowess in designing and developing operationally fit fighter aircraft. India with the success of this mission has joined the select group of countries becoming only the sixth nation, after the US, Russia, France, UK and China, to have been successful in developing a carrier-based fighter aircraft.

ADA has successfully developed much of the technology required for the carrier operations in-house. From the complex flight control system to the undercarriage assembly and arrestor hook, ADA has mastered much of the complex systems.

Speaking about the challenges that faced the developmental teams, sources with ADA said “Challenges was everything connected with carrier operation. Many technologies were to be proven. The aircraft had to be mated with Russian arresting system and indigenous aircraft systems, which is a difficult task looking at the nil history on carrier operations.” 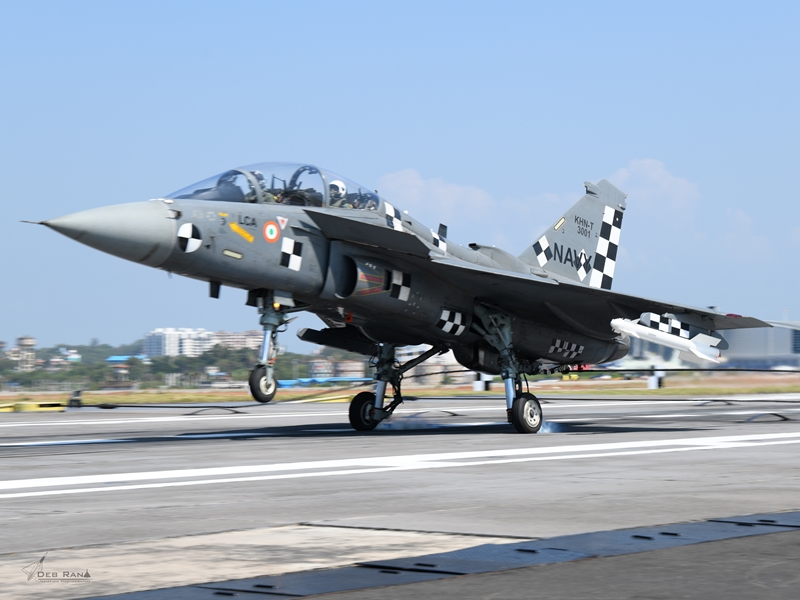 While the LCA program has often been criticised for inordinate delays, the NLCA has remarkably achieved this landmark success within 8 years of its rollout in July, 2011. This remains a very competitive developmental timeframe, as much of the NLCA’s competitors have taken around the same time for their maiden landing.

The success with the NLCA comes in the backdrop of the Indian Navy pushing for the procurement of 57 Multi Role Carrier Borne Fighter (MRCBF) aircraft to operate from its future carrier Vikrant from a global vendor. The Navy had in December, 2016 opted for the import route after citing shortfalls in the NLCA.

Speaking about the procurement program, the then Chief of Naval Staff Admiral Sunil Lanba had said “The MiG-29K will operate from the INS Vikrant. But we also need an alternate aircraft now. We are looking for it (MRCBF), as the LCA is not up to the mark yet. In the present form, the LCA cannot take off with its full weapon load (from an aircraft carrier).”

Since the aircraft’s first flight in 2012, much of the focus of the developmental teams had in fact been towards addressing these concerns. For almost two years, teams at ADA worked on reducing the weight of the platform by at least 350 kgs, to make the aircraft fit for full fledged operations from STBF.

ADA tasted success when NP – 1 in December, 2014 successfully conducted its maiden take-off from the ski-jump Shore Based Test Facility (STBF) in Goa. Ever since, the developmental teams had been pushing for the landing and take-off the NLCA from INS Vikramaditya.

The NLCA Mk-1 itself have been addressed to as “Technology Demonstrators”, which will provide the country’s aeronautical fraternity a deep dive into the complex activities involved in the development of a MRCBF. The real deal though, according to ADA, will be the newer twin engine powered carrier borne fighter being developed by ADA.

Moving forward, the next milestone in sight of the ADA will be to operate the NLCA from aboard the aircraft carrier with full weapon land. The aircraft has already proved this technology when operating from the STBF. The data gathered through these tests will be crucial for the future development programs.