The Navy’s Hunt for October through – Program 75 – India 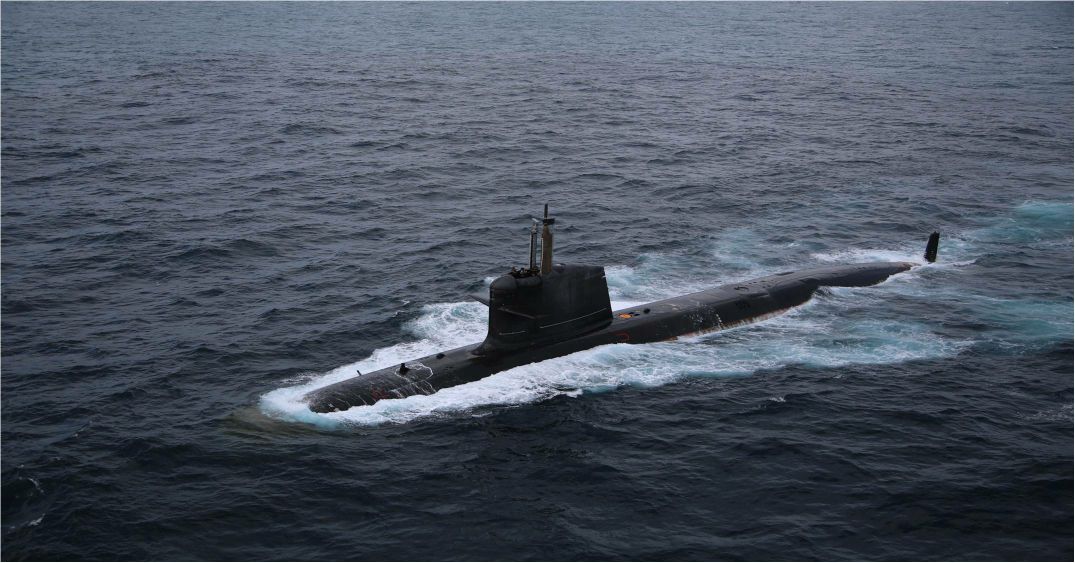 The Indian Navy is preparing ground for putting up a power-packed show along the coastline with ‘Made in India’ surface combatants, which are set to showcase their operational prowess. The top fraternity of the Navy however remains occupied in handling interactions with the arms manufacturers, who remain enthusiastic about doing business with one of the biggest arms market.

The talk of town through DefExpo – 2018, one of India’s leading Defence trade show, was undoubtedly the INR 50,000+ crore worth ‘Program – 75 India (P-75I)’ of the Indian Navy. Drafted as a follow on to ‘Program – 75’, P-75I is aimed at acquiring six diesel-electric submarines. The major technical difference between the P-75 and P-75I combatants would be that latter, when acquired, will come readily equipped with the decisive AIP (Air Independent Propulsion) systems.

The procurement program for these modern combatants began yearly in the last year, following the notification of the SP Model, under which the deal is expected to be processed in the future. Life to the multi-billion procurement program was, however, added when the Navy in July, 2017 formally introduced a RFI for procuring six of these platforms.

P-75I remains to be one of the largest acquisition deal floated by India. Indian Navy has time and again raised the exigent need for these underwater combatants, which it says is the need of the hour for countering the Chinese presence in the region. After all, the Indian Navy has been left to fend with about only a dozen submarines, which are themselves decades old. Most of these submarines remain peered at their bases due to frequent breakdowns and time consuming maintenance and overhaul periods, according to sources.

Realising that the Navy will go all out to fructify the tender at the earliest, global manufacturers are making the most out of DefExpo by showcasing their products and its capabilities to both the Naval and ministry officials. After all, no other country in globe currently is expected to meet the hefty purse of India.

Since the introduction of the tender, at least four global manufacturers are believed to have replied to the high-stakes tender. It has now emerged that all the four of these companies – Naval Group, ThyssenKrupp, Saab AB and Rosoborron Export – have all set stalls at DefExpo – 2018. The massive ergonomically designed stalls are expected to stand as a testimony to their capabilities.

Leading this bandwagon with a healthy lead is the French-based Naval Group. The maritime giant for P-75I has offered a more advanced and smarter version of the Scorpene. The company has agreed to the demands of India to fully design and manufacture these platforms in India under an elaborate ToT agreement. Naval Group is currently involved in the construction of at least six Scorpene-class/Kalvari-class diesel-electric submarines under P-75.

The company is riding its multi-billion dollar tender both on the unique technical capabilities of its platform and more importantly on its presence in the Indian market, which gives it a distinct edge in the ‘Make in India’ initiative. Working with its Indian partner MDL, Naval Group under Program – 75 has set-up a state-of-the-art submarine manufacturing line at Mumbai.

Naval Group strongly believes that its prior investment and commitment to the Indian market alone will be a crucial influencing factor in the P-75I tender. The manufacturing line, which currently has four Scorpene submarines at various stages of construction, the company says can be utilised for the construction of the upgraded Scorpene with very minimal modifications. This, the company says, is expected to drastically cut down the initial investment towards the prerequisite infrastructural establishment, thus giving the company some solid lead on the financial front.

On the technical front yet again, the Scorpene’s with an extremely modular design, remain to enjoy a distinct lead. The 2000-tonne submarines have globally been addressed as one of the most robust underwater packages, which can seamlessly operate in anti-surface, anti-shipping, interdiction and ISR roles. Equipped with a powerful diesel-electric engine, the submarine according to its manufacture has the capability to operate in close co-ordination with CBGs. The submarine has a projected range of 13,000 miles and the addition of smart computer based platform and combat management system has meant that the submarine can operate with a very skeletal crew.

Naval Group representatives, further, revealed that their package also largely rides on their partnership with local partners. While MDL has been fabricating, assembling and integrating the submarines, Naval group has created a vast and diverse feeder supply chain in India by tapping the expertise of the private and MSME sector. From crucial underwater pumps to weapons handling systems to advanced platform management systems, these companies have firmly established themselves in the supply chain.

For instance, while Vizag based Flash Forge is manufacturing ventilation coaming and air panels, SEC industries has been engaged to manufacture main thrust blocks, cofferdam doors, steering consoles and even the crucial weapons handling and storage system. This networked supply chain according to the company helps in reducing both the time frame and the eventual financial concerns.

A senior representative of Naval Group India speaking to Life of Soldiers about movement in the P-75 I deal said “On P-75I, we believe that we would be in a position to propose an advanced submarine meeting the requirements in terms of operation and indigenous content. We also believe the “Make in India” P75 program with its important indigenous content could be a good template, which could be used successfully for P75I by adding the additional functions or performances required by Indian Navy.”

Trailing the Scorpene closely are, the Type-214 submarines, being offered by German-based ThyssenKrupp Marine systems. The Type 214s remain to be regarded as one of the most sophisticated and stealthiest underwater platforms to have been ever designed. With ThyssenKrupp losing out the high-stakes Australian tender, the company is now pursuing the Indian deal with a renewed surge. The Type-214s, which have been on offer to India for over a decade, had in fact contested against the Scorpene’s in the prior P-75 tender.

The manufacturer – ThyssenKrupp – remains to be one of the largest and most experienced submarine builders in the world. Designed based on the Type – 212, the Type – 214 are powered by a highly evolved diesel-electric engine enabling to attain high speeds. This factor is crucial if the submarine is deputed to tag high-value targets such as CBGs and SSNs. The provision of PEM (Polymer Electrolyte Membrane) based AIP cell enables the submarine to enjoyed unmatched endurance. The manufacturer claims that the AIP technology enables the submarine to be at sea for almost 5-6 times longer than conventional diesel-electric submarines.

When asked about the company’s commitment to the ‘Make in India’ clauses, senior ThyssenKrupp representatives said that the company has always remained supportive to the development of local capabilities. The company sighted that in fact it was the Type-209 submarines that started the ‘Make in India’ concept in the country’s submarine building history. Two of the four such submarines in service with the Indian Navy had in fact been constructed in the 90’s by MDL in Mumbai.

Another manufacturing showcasing their platform on the sideline of DefExpo – 2018 is Saab which is fielding its under-development A26 platform. Being termed the black horse of the tender, Saab is riding home its offer almost solely based on its offer for a ‘no strings attached’ Transfer of Technology agreement. The Swedish claims that it will not only transfer technology but will in fact set-up a sustainable manufacturing ecosystem in the country, which it further states will be integrated to its global line.

Being designed as replacements to the legendary Gotland-class submarines, the A-26s feature one of the most modular designs. The platform has been built integrated with GHOST (Genuine Holistic STealth) capabilities providing the submarine with extremely minimal cross-section figures. The addition of the Stirling AIP system has further augmented the stealth capabilities of the platform. Another unique capability of the platform is the provision of an 18 VLS-class (Vertical Launch System) for launching land attack cruise missiles.

Jan Widerstorm, CMD, Saab India, speaking to Life of Soldiers about his company’s foray to the maritime sector, said “The acquisition of TKMS AB (former Thyssen Krupp Marine Systems AB), now known as Saab Kockums, has added a lot of strength to our company to offer a range of naval products that now extends from fully integrated fighter aircraft to a wide range of combat platforms for navies.”

Speaking about his company’s offer to India, he said “Regarding submarines, the Swedish Navy has placed an order on Saab Kockums to design and build the next generation of air-independent propulsion submarines. The Swedish A26 submarine is the most modern submarine program on the market and we stand ready to offer and work the Indian market with it.”

With the onset of Program – 75I, technical expertise of the nation’s submarine building capacity will be enhanced. Having had the better records of indigenisation, Indian Navy, has been inclined towards the PSUs and the outcome has been in the form of increase in the receivables. Similar to the movement of their submarines, Indian Navy has been silently enhancing its strength by adding the much needed under-water platforms in regular intervals with expertise on the technology and the pride of indigenisation.