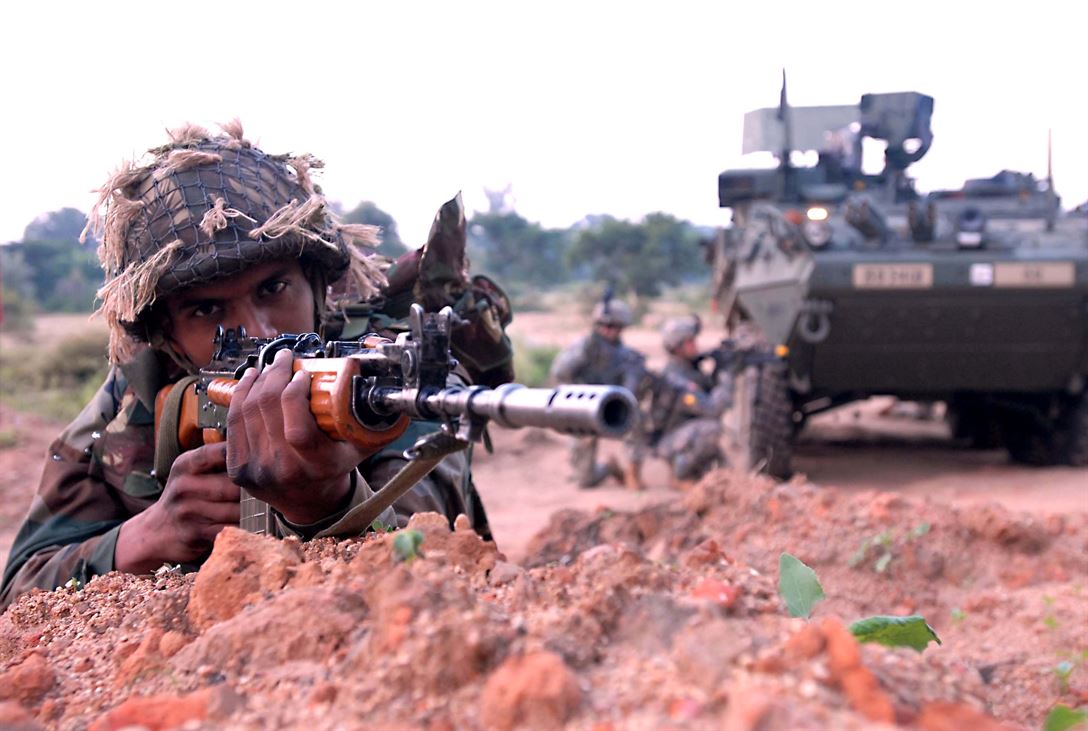 Being the third largest Army in the world and sharing its border with hostile neighbours, Indian Army is always geared up to protect the nation from any threats. To equip them with the best possible rifles, which are vital to the soldiers, Government has issued RFIs for 2,00,000 Close Quarter Carbines and for 5,000 sniper rifles. How soon can the Army get hands on to their closest asset?

Having 450 infantry battalions at its disposal, Indian Army has been an infantry predominant force. More than 50% of the Army’s total strength is formed by infantry men and they serve as the country’s first line of protection against a varied range of threats.

Even though the infantry men are in contact with hostile forces almost every day, it is worrying to note that this important arm of the Army is being haunted by an abundant scarcity of even basic equipments, thereby largely hampering their operational capabilities. The infantry has been left to operate with decades old INSAS rifles, which have repeatedly been criticised by the forces.

At the core of the infantry’s requirement is the need for a reliable and lethal assault rifle, which is the most basic firearm for its men. Successive Director General of Infantry (DGI) have raised an immediate need for at least 2,00,000 rifles. The Army has a total requirement for at least 7,00,000+ such rifles. Senior officers of the Infantry quip that this massive requirement, which is expected to breach INR 1,50,000 crore mark when mounted, solely arises as a result of repetitive failures with indigenous efforts. Rifles developed around the INSAS concept, a product of India’s OFB, has met with limited success and has made Indian Army to look out for the replacements from foreign players.

Faced with repeated breakdowns and limited results with the 5.56X45mm INSAS rifle, the Indian Army has been in the hunt for an assault rifle chambered with 7.62X51mm rounds from global vendors since 2000. This shift meant that the Army has after all designed to adopt a ‘shoot-to-kill’ doctrine over its much criticized ‘shoot-to-maim’ doctrine.

Missing synergy between the indigenous developer and the end user for years, have meant that the country has failed miserably in its efforts to develop a lethal assault rifle. Further, successive global hunts for the rifle have also failed; as every single weapon system fielded for trials over the years have failed to meet the extremely demanding GSQR (General Staff Qualitative Requirements) of the Army. These factors have for years invariably stalled the induction of an assault rifle.

The high costs involved in the acquisition program have meant that the entire need for about 7,00,000+ rifles cannot be answered by Global vendors alone. As a contingency plan, the Army has now decided to breakdown the procurement into distinct categories. While the frontline soldiers, who are actively in contact with hostile forces, will be equipped with the globally acquired rifles; troops deployed in the rear flanks will be issued with an indigenous rifle.

The Army, in September 2016, yet again initiated the hunt for about 2,00,000 7.62X51mm assault rifles. The GSQRs, have finally been toned down, with the Army shedding away its requirement for interchangeable barrels. The rifle being sought is expected to have an effective range of 500 meters and should feature a modular design, making provisions to fit add-on sights and also a 40mm Under Barrel Grande Launcher (UBGL).

The Army has already forwarded a RFI for several global vendors. Even though, the latest program is to be executed under the ‘Buy and Make (India)’ category of DPP-2016, it has been specified that the ‘Buy’ category will be set to NIL, meaning the down-selected vendor will have to manufacture all of the rifles locally in India. For the tender, Colt of US, Beretta, Israel Weapons Industries, Ceska and Sig Sauer have shown interest. A RFP for the same is expected by May, 2018.

M4 carbine from the stables of Colt has the lead when it comes to operational statistics. It has been part of the wars in Iraq and Afghanistan, where the US troops have operated in varied weather conditions. While Beretta is expected to bid with its ARX-160 series rifle, IWI (Israel Weapon Industries) is to participate with its ACE-1 series of rifles. Even though all of these rifles have previously failed to clear Army’s prior field trials, the diluted GSQR may produce a winner this time.

On the indigenous front, the Army has to select either the INSAS – 1C, that was designed by DRDO or the Ghatak rifle, which was designed in-house by OFB. With a diluted GSQR, the product developed by DRDO and OFB might have chances of seizing the opportunities. The Army has already rejected the recently offered Ishapore rifle factory manufactured assault rifle and the ARDE developed MICWS, citing technical glitches. As India presses ahead with the global tender, it is time that the user and the developer rise together to meet the pressing needs.

Besides the hunt for the assault rifle, the Army has also recently initiated process to acquire both carbines and LMGs. The MoD has already green lighted the Army’s proposal for acquiring 44,600 close quarters battle (CQB) carbines under a Government-to-Government deal. These CQB carbines are becoming a bare necessity for the Army in Jammu and Kashmir (J&K) as conflicts with terror factions in densely populated urban environment is increasing at an alarming rate. The MoD has also awarded an AoN (Acceptance of Necessity) for acquiring several thousand LMGs.

In parallel, the Indian Army is also aiming to procure 5000+ sniper rifles. As per the RFI, it is looking for a overseas vendor who could manufacture the rifles in India under a ToT(Transfer of technology) agreement. 5000 will be relatively lesser number for any company to agree the terms on ToT, which in turn makes the companies to take a step back towards the RFI. The Army is currently operating the aging Russian Dragunov 7.62mm and is in pursuit of a sniper rifle that can fire 8.6mm bullets up to 1,200 metres with pin-point accuracy.