Annual Budget signals a halt on modernisation of armed forces 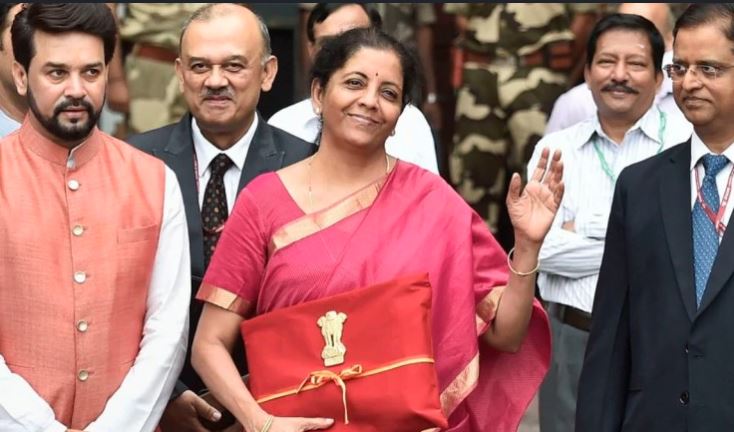 The annual budget for 2019-20, which is a replica of interim budget for the armed forces, presented by Finance Minister Nirmala Sitharaman clearly indicates that there is no scope for modernisation of the forces as the capital outlay doesn’t suffice the forces to proceed with procurement of requisite platforms. Who could have realised better than the need for modernisation of armed forces than the current Finance Minister?

On 5th July 2019, Finance Minister Nirmala Sitharaman, presenting her maiden budget, allocated INR 3,18,011 crore to the Ministry of Defence to meet the demands of the country’s Armed Forces with no changes to the allocation provided in the interim budget. While INR 2,10,617 crore has been earmarked for the annual revenue expenditure, the remaining balance – INR 1,07,394 crore has been allocated for the Capital Expenditure. This nominal rise of 6.6% is being viewed as insufficient to meet the needs of the forces.

The allocated amount accounts for about 11% of the total Central Government expenditure for FY 2019-20, represents a marginal growth of 7.81% in the country’s annual defence budget.

While presenting the budget, the Finance Minister, stating the importance of modernisation of Indian armed forces said – “Defence has an immediate requirement of modernisation and upgradation. This is a national priority. For this purpose, import of defence equipment that are not being manufactured in India are being exempted from basic customs duty.”

The Defence Ministry in a statement claimed that the exemption of Customs Duty alone is expected to save about INR 25,000 crore.

Out of the allocated INR 3,18,011 crore, a major portion – INR 2,10,617 crore – has been earmarked for the annual revenue expenditure and the remaining – INR 1,07,394 crore – has been dispersed for the annual capital expenditure. While the revenue expenditure handles expenses related to salaries and maintenance of establishments, it is the capital expenditure that drives the modernization programs of the country’s armed forces. For payment of pensions, which is independent of the Defence budget, the Government has allocated INR 1,20,080 crore.

The allocation figures clearly indicates that the dismal manpower cost management has yet again eclipsed the modernization of the country’s armed forces. While the Army will spend a worrying INR 1,42,685.19 crore for meeting its revenue expenditure, the Air Force will shed INR 35,401.69 crore and Navy INR 23,943.71 crore under the revenue head. The defence budget, which amounts to about 2.06% of the projected GDP for FY 2019-120 remains to be one of the lowest such allotment figures for the modernisation of the Armed Forces.

The capital allocation component, which handles the modernization programs of the forces and the development of organizations under the MoD, has been allocated INR 1,07,394 Crore. The allocation for the capital head has seen a marginal increase of INR 13412 crore from INR 93,982 Crore, which was the allocation in FY 2018-19.

Further, this category also caters for acquisition of land and development of civil infrastructure.

Even though the Capital head has seen a marginal rise of INR 13412 crore with an allocation of INR 1,07,394.00 crore in comparison to INR 93,982.13 crore in FY 2018-19, it has to be noted that a majority of it will be earmarked for committed liabilities. Initial projections peg this amount to be close to INR 83,550.60 crore, leaving only about INR 23,843.40 crore for capital acquisitions in this fiscal year. With almost 80% of the amount in the capital head being routed for payment of previous programs, there is hardly any scope for concluding any fresh procurement programs in FY 2019-20.

The dismal allocations have meant that the country’s Armed Forces will continue to grapple with critical operational constraints. Successive skewed allocations by the Finance Ministry for MoD raises serious questions of how the Government will tread forward in meeting its commitments to the Armed Forces.

This alarming trend of dismal allocations year-on-year by successive Governments has yet again raised questions about how the country’s military forces will take forward their long term modernisation programs being pursued under the Long Term Integrated Perspective Plan (LTIPP). For realizing LTIPP, the armed forces had sought an allocation of over INR 26,84,000 crore over the next five years. Even though the Government, under the 13th Defence Plan, had projected to outlay INR 12,88,654 crore for capital outlay, there are serious uncertainties on meeting it’s own commitments.

With an allocation of INR 41,347 crore in FY 2019-20, the Air Force has yet again claimed the largest pie in the capital outlay. In FY 2018-19, the force had been allocated INR 35,755 crore, meaning the force has received a boost of close to INR 5,592 crore for handling its modernization programs, which is very unlikely to suffice the requirements of Air Force. The Force had, however, projected a need for INR 74,000 crore, meaning there exists a budgetary deficit of INR 34,697.36.

In FY 2019-20, the Air Force has been allocated INR 24, 807.19 crore for handling its requirement of fighter aircraft and helicopters. This, however, will not translate to newer orders, as the force has high amounts of committed liabilities. In the current Fiscal Year, the Air Force will have to make tranche payments for the French Rafael fighters, Apache and Chinook helicopters contracted with the USA, the indigenously built LCA Tejas and LCH platforms concluded in the previous years. It is worrying to note that the Air Force has been forced to shed about INR 5 crore under this acquisition head in comparison to the previous budget, even as several big tie acquisition programs are underway. The Air Force had been allocated INR 24,811.61 in FY 2018-19.

An amount of INR 11,448.15 crore has been allocated for the Air Force for meeting its requirements for missile and support systems. An increase of almost INR 3,225.47 crore under this category means that Air Force may conclude  very few major deals in the current fiscal year, besides beginning tranche payments for the S-400 missile deal concluded with Russia last year.

For construction of Air Bases and other allied infrastructure to support air operations, the Government has allocated INR 1,837.30 crore. Special projects being undertaken by the IAF will receive a boost with allocation of INR 1,030.00 crore.

While the Army had raised a requirement for INR 42,150 crore for capital acquisitions in FY 2019-20, the allocated amount stands at a dismal INR 30,877.28 crore, meaning there exists a deficit of INR 11,272.72 crore. Meaning there exists a budgetary deficit of about 30.13%. Last year, this figure stood roughly at about INR 15,783.33 crore. While the Army has for years requested to check this deficit, the deficit percentage has, however, alarmingly increased with every budget.

Appearing before the Parliamentary Standing Committee on Defence, the then Vice Chief of Army Staff (VCOAS) Lt Gen Sharat Chand had submitted that marginal increases in Capital Budget allocation for the Army had dashed all hopes, as it would be barely enough to counter the inflation level, and did not even cater for the affect of the increased tax burden.

Drawing the attention of the committee to the alarming situation, the VCOS, had stated that the allocations were insufficient to even cater for Committed Liabilities, on-going schemes, ‘Make in India’ projects, infrastructural development, policy of strategic partnership of foreign and Indian companies and procurement of arms and ammunition.

With about 125 ongoing schemes, the Army in FY 2018-19 had a committed liability of INR 29,033 crore. The allocation under capital head which was INR 21,338 crore, was thus, not even sufficient to cater for liabilities. With these liabilities having been rolled on to the current budget, Army’s modernisation programs have been greatly hampered.

A bulk of the allotment – close to INR 18, 562.15 Crore – this fiscal year will be spent for acquisition of rifles, ammunition, bulletproof jackets and helmets, howitzers and field guns. A major portion of these equipments will go on to arm the Army’s forward deployed battalions, which serve in some of the most treacherous operational environments.

Further, the Army in this fiscal is expected to shed about INR 2115.43 crore for acquisition of helicopters for arming its aviation corps. The force has already committed for more than 200 Kamov Ka-226T helicopters with a joint consortium of HAL and Kamov, Russia. Besides this, the Army has also placed orders for the indigenously built Light Combat Helicopter (LCH) from HAL and Apache attack helicopters from Boeing Defense.

The Army has been allocated INR 2128.05 crore for meeting the needs of heavy and medium vehicles, which includes the demands of the mechanised forces for the acquisition of tanks and ICVs.

A curtailed budget for the Navy will have severe implications and will mean constrained progress of New Schemes and ability to conclude contracts, likely delay in induction of critical capabilities and impact on progress of infrastructure projects.

Of the 23,156.43 crore, INR 12,182.00 crore has been allocated for the acquisition of newer naval platforms. The Navy will continue with tranche payments already underway to Indian shipyards, which are currently involved in building at least 56 major sea-going combat vessels for the Navy.

Further, the Navy will shell out INR 2,400 crore for meeting requirements of its aviation wing. A provision of INR 3,050 crore has been made for handling naval projects across the country. Construction activities will witness some strengthening with the Government allotting INR 1,000 crore.

A senior officer appearing before the Standing Committee had brought to its notice, that the Navy has been forced to manage its budget through the financial year by deferring certain committed liability payments so that a certain amount can be earmarked for the purpose of modernisation and implementation of new schemes.

The Committee in its final report had come down heavily on the Government for failing to address these issues and had said that it felt aghast to note that there appears to be an element of complacency with regard to ‘acquisition projects’, and shortfall, and delays in meeting the payment obligations.

Budget for OFB and DRDO

While the country’s lead defence technology provider Defence Research and Development Organisation (DRDO) has been allocated INR 10,484.43 crore, the Ordnance Factory Board (OFB), which is the lead provider of arms and ammunition to the services, has been provided with INR 884.05 crore.

It is an established norm world over for any modern Armed Forces to have one-third of its equipment in the vintage category, one- third in the current category and one-third in     the state of the art category. With the Indian Armed Forces, though, the situation is entirely on a different trajectory.

For instance, a study of the equipment inventory of the Indian Army reveals that 68% of equipment is of vintage category, just about 24% of the current category, and only 8% is of the state-of-the-art category.

The Air Force, which is in charge of guarding the country’s air space, is left to operate with just 29 squadrons as against the mandated 42 squadrons. The worryingly lacks even the most basic requirement for trainer aircraft, forcing it to altogether change its training program.

The Navy, which has a crucial role in checking the onslaught of the Chinese Navy in the Indian Ocean Region (IOR), has also been left to fend with inadequate assets. From missing minesweepers to heavyweight torpedoes, the Navy operates toothless even as China makes a strong push into India’s maritime backyard – the IOR.

As the tango between India’s arch rivals – China and Pakistan – gains traction, it is crucial that forces remain prepared to counter the much feared two front war scenario. The huge deficiencies and obsolescence of weapons, stores and ammunition existing in the ranks of the Armed Forces, does not augur well to this build-up. It is, therefore, imperative that the Government introduces adequate efforts to channelize sufficient budget towards modernising the aging armoury and filling up the gaps.