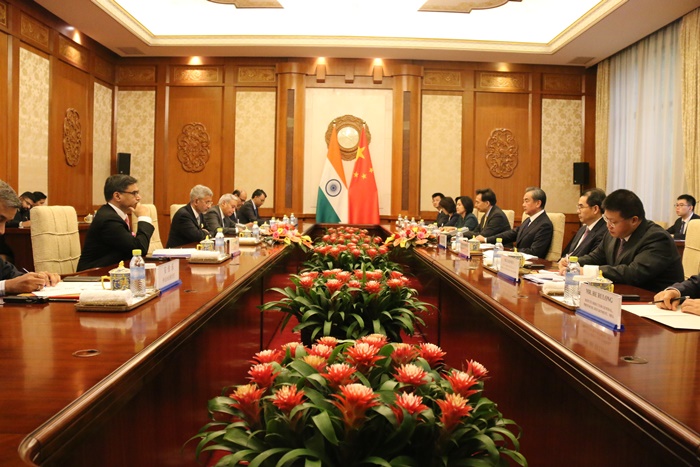 The visit comes at a time when India is under undue pressure from Beijing following Delhi’s decision to abrogate Article – 370 and 35A in Jammu and Kashmir (J&K). China has taken strong opposition to what it terms as change of status quo in Ladakh region. Hua Chunying, Spokesperson for the Foreign Ministry, in a statement said “China always opposes India’s inclusion of Chinese territory in the western section of the China-India boundary under its administrative jurisdiction. This position is firm and consistent and has never changed. The recent unilateral revision of domestic laws by the Indian side continues to undermine China’s territorial sovereignty, which is unacceptable and will not have any effect.”

Urging India to watch its words and actions of the boundary issue, China has called for strictly abiding by what it terms relevant agreements reached between the two sides to avoid any move that further complicates the boundary issue.

Beijing has also said that it remains seriously concerned with the situation in Kashmir and has called for restraint between India and Pakistan. While China has come short of internationalising the Kashmir issue, it had, following the abrogation of Article – 370 and 35A, said that it does not support any unilateral change of status quo or exacerbating tensions in the contested regions.

EAM S Jaishankar, an experienced China hand himself, also held high-level delegation talks with both Vice President Wang Qishan and Foreign Minister Wangi Yi to explain India’s position on the abrogation of the contested articles of Indian constitution. The MEA has since the abrogation maintained with crystal clear that the move by the Government is an entirely internal matter and any dispute arising in Kashmir remains to be a bilateral issue between India and Pakistan.

EAM S Jaishankar also held talks with his counterpart Wangi Yi to work out details for the upcoming second informal summit between PM Modi and President Xi. Both the state heads are expected to meet for the second summit in India somewhere in October this year. The MEA has already communicated to Beijing that summit would be held in one of India’s Southern states. Karnataka, Kerala and Tamil Nadu are learn to have been shortlisted for the high-stakes event. The informal mechanism has been setup between the partners to address any irritants to the bilateral relations at the highest levels. It was at last years Wuhan summit that PM Modi and President Xi were successful to address the concerning military standoff between Indian and Chinese military in the Doklam region.

High on EAM’s agenda will also be to push for the conclusion of border agreement between the neighbours. The border dispute between India and China, which traces back to pre-Independence era, remains to be one of the most protracted border issues in the world. While India and China began talks for formally demarcating a border and operationalisation of the Line of Actual Control (LAC) in 1983, headway was made only after a decade when both the countries concluded the ‘Maintenance of Peace and Tranquility Along the Line of Actual Control in the India-China Border Areas’ on 7th September 1993.

While this agreement promised to set grounds for resolution of the dispute, not much headway has been made ever since. Both Delhi and Beijing have been successful in only concluding agreements for Confidence Building Measures in the Military Field Along the Line of Actual Control. Both President Xi and PM Modi having recognised the importance of a formal border agreement have time and again batted for the early conclusion of the matter. With India now having changed the status quo in Ladakh, a certain part of which is claimed by China, it is crucial that any differences between the partners are worked out at the highest levels to make grounds for an early conclusion of the protracted dispute.