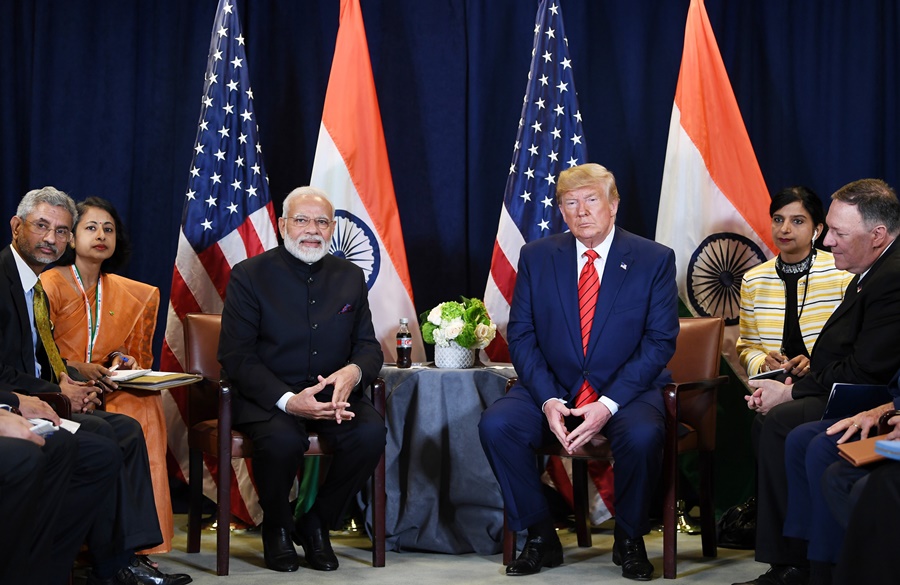 Within months of his Government’s monumental and strategic decision to abrogate Article – 370 & 35A in Kashmir and further to bifurcate the contested and troubled state of J&K into two Union Territories, Prime Minister (PM) Modi on September 21 travelled to the United States of America (USA) for the 74th session of the United Nations General Assembly (UNGA). A lengthy visit, which lasted for almost a week, witnessed the PM meeting several state heads and meeting the local Indian diaspora besides addressing the UNGA on September 29, 2019.

The highlight of the US visit, however, was the ‘Howdy Modi’ event held at Texas in the presence of the US President Donal Trump. The attendance of the sitting US President at a private function in recognition of a visiting state head signalled his administration’s undying support to India.

The ‘Howdy Modi’ event, hosted by the Texas Indian Forum (TIF), witnessed both the world leaders addressing a 50,000 strong Indian diaspora, thus setting a new tone in India and US’ people-to-people ties.

While the event was termed as a private function, it can safely be termed part as a part of India’s diplomatic outreach to the US. PM Modi’s introduction of President Trump as a very special person, who has transformed from being a CEO to the Commander-in-Chief, thus transiting from boardrooms to the Oval Office, and lauding Trump’s efforts, to what the PM referred to as achievements in bettering not only US’ economy but also the global economy and well being, is definitely bound to have earned some much valued brownie points for New Delhi with the White House. PM Modi’s statement addressing President Trump as quite an expert in the “art of the deal (of negotiations) is bound to have turned heads in the White House.

It has been a crucial mission for the MEA to better India’s equation with the White House as President Trump has time and again aimed his gun at India for what he termed as unfair trade practises (trade deficit) of India. President Trump’s endorsement of India as once of America’s greatest, most devoted and loyal friend right at the outset of his speech can earn some breather for New Delhi. His further endorsement of PM Modi and his efforts will cement the personal relationship the leaders share.

Every day, Indian Americans help write this story of American greatness, and everyone here today has a crucial part to play in building an even grander and greater American and Indian future.

While many feared that President Trump might call out India on the pressing issues of trade deficit and Kashmir tensions, no such untoward references were made, thus easing the apprehensions of India’s foreign policy watchdogs. While Trump’s rhetoric for his Make America Great Again (MAGA) was the highlight of his address, his recognition of India’s efforts to invest in the US, be it through purchase of US steel, natural gas or defence equipment, pointed towards the easing of trade tensions between the strategic partners.

Setting a tone for the future of the relations between India and US, President Trump said “Together, we will continue to deepen the ties between our nations, we will honour the faith and dignity of our citizens, and we will achieve incredible advancements for our people, for our children, and for the world. We will discover new cures and save millions of lives.  We will advance cutting-edge technologies, and lift millions and millions of people out of poverty. We will pioneer new frontiers in space, working together, raising the sights of humanity.” This marked the easing of the people-to-people ties, which serves as a founding element to the Indo-US bilateral relations.

The PM used the Texas stage to not only advance the Indo-US bilateral case, but also to quell the world’s apprehensions to his Government’s decision in Kashmir. His answer to the question of ‘Howdy (How do you do) Modi’ through a cheeky response saying ‘Everything is fine (in India)’ is viewed as an effort to address the Global concerns.

The PM also drove home his Government’s stance on the abrogation of ‘Article-370&35A’ stating that these articles was a challenge facing India for the last 70 years. Article 370, the PMs said, deprived the people of Jammu, Kashmir, and Ladakh of development and equal rights.

PM Modi in the presence of President Trump and senior US officials took direct potshots at Pakistan and its support to terror factions by funding and providing a safe heaven for these violent extremist group. Calling for global action against terrorism, PM Modi said, “Friends, the time has come to fight a decisive battle against terrorism and against all those who promote terrorism.”

Addressing his ire at Pakistan and its actions to stir peace in the Valley, the PM said, “The forces funding terrorism and separatism were exploiting the situation.  Now, the same rights that were given by the Constitution of India to the rest of Indians have now also been given to the people of Jammu, Kashmir, and Ladakh. The discrimination against their women, children, and traditionally underprivileged has been put to an end.” Saying that the abrogation was supported by India’s population, he said, “Friends, in the Upper and Lower Houses of our Parliament, this topic was debated extensively for hours, and the proceedings were also telecast live across the country and across the world.  Although our party does not have a majority in the Upper House — that is in the Rajya Sabha — despite this, both Kouses of our Parliament, the Upper House and the Lower House, both of the Houses of our government passed all related decisions on this with a two-third majority.”

Calling out Pakistan’s efforts to disturb regional and work peace by supporting and spreading terrorism, the PM said, “India’s actions within its boundaries are causing discomfort to some people who are unable to manage their own country. These people have put their hatred of India at the centre of their political agenda.  These are people who want unrest. These are people who support terrorism and who nurture terrorism. You know them very well. You know who they are. It’s not just you; the whole world knows who they are. Whether it was 9/11 in America or the 26/11 attack in Mumbai, where were the conspirators of these attacks found?”

While the Texas added chemistry to the personal relationship shared between the leaders, the formal bilateral on the sidelines of the UNGA in New York witnessed the leaders making efforts to furthering the trade relationship. The PM revealed that in an effort to balance the trade deficit, India’s Petronet has committed to investing $2.5 billion in US’ energy sector. This investment, according to the PM, will account to at least $60 Bn trade between the partners over the decades and will also create at least 50,000 jobs.

On the much awaited trade deal, President Trump said that the partners would be shortly concluding a limited deal, negotiated between India’s Commerce Minister – Piyush Goyal and Robert Lighthizer – US’ current Trade Representative (USTR) – by the yearend. Trade tensions between India and the US have soured to record levels since Trump’s administration revoked the Generalised System of Preference (GSP) status in June, 2019. On the larger trade deal, which is expected to address a host of concerns plaguing India-US’ trade relations, the President said that it would be concluded a little bit down the road.

The Prime Ministerial delegation is also learnt to have recented the US’ offer for mediation in the Kashmir issue. President Trump has time and again has termed itself an able mediator and arbitrator and has offered to mediate in the Kashmir issue. He repeated this unilateral offer yet again during his bilateral with PM Khan. This move had not gone very well with New Delhi. The PM is learnt to have expressed his dissatisfaction at US’ move and is said to have communicated to the President that India views Kashmir as a bilateral matter between itself and Pakistan and that any third party negotiation remains off the table.

Both the leaders, through the course of bilateral are learnt to have made a strong cause for furthering their strategic relationship. Defence cooperation, which is the cornerstone in the Indo-US relations, is said to have received the key focus of the principals. The US has in the past decade supplied Indian armed forces with the latest weaponry amounting to more than $18Bn.

US based defence equipment manufacturers remain in contention to supply Indian military with platforms worth a whopping $25Bn over the next decades. US based Boeing and Lockheed Martin with their F18 SuperHornet and F-21 fighter respectively lead the fray in the Airforce’s multibillion dollar MMRCA acquisition programme. Sikorsky is in contention to supply the Indian Navy with 111 NUH and 123 NMRH rotary platforms. Boeing is expecting follow-on orders for its P8I maritime aircraft, Apache attack helicopters and the Chinook heavy-lift helicopters.

The Principals are also learnt to have agreed for the early conclusion of the Industrial Security Annex(ISA) and the Basic Exchange and Cooperation Agreement (BECA). The US terms the compulsory conclusion of these fundamental agreements to enhance industrial cooperation, through transfer of technology, between the partners. US and India have in the recent past been successful in concluding the COMCASA and LEMOA foundational agreements after decades of consultations and negotiations.

Another highlight of the PM’s visit to the US was his UNGA address on SEP 27 at UN’s headquarter in New York. At the heart of the PM’s address to the world community was his government’s progressive and developmental agenda.

The PM highlighted India’s success in building over 110 Mn toilets in just 5 years to better sanitation and roll out of a medical assurance scheme, giving over 500 Mn people access to quality health care. Success of the Pradhan Mantri JanDhan Yojana (PMJDY) Programme, the world’s largest financial inclusion scheme, under which over 370 million bank accounts have been opened also found a special mention.

Furthering his government’s developmental agenda, the PM revealed that his government plans to construct  125,000 kms of road, 20 Mn houses for the poor and supply portable water to atleast 150Mn households by 2024. He furthered the cause for use of renewable energy sources and committed to achieve the target of generating 450GW of renewable energy. India’s gift of the ‘Gandhi Solar Park’ to the UN stands testimony to this mission. The Gandhi solar park which was funded by India has a capacity to generate 50KW of energy, with 193 solar panels, with one each being reserved for each of the 193 UN members.

Recognising the efforts and sacrifices of Indian armed forces to maintain global order and peace under the aegis of the UN Peace Keeping Missions, the PM promised to increase India’s commitment to the UN forces. Invoking Buddha and his mission of peace, the PM called upon the global community to tackle the threat of terrorism.

Providing deeper insights to the member nations on terrorism and the need to quell its sponsors the PM said – “ We believe, that this is one of the biggest challenges, not for any single country, but for the entire world and humanity.

India has for decades struggled with cross border terrorism which has been perpetrated with support from state actors across the borders. Terrorism has time and again struck at the very veil of India’s sovereignty and democracy.