Government Allocates INR 2,95,511.41 Crore For Defence Forces. Will a rise of 7.81% suffice the needs of the country’s Armed Forces? 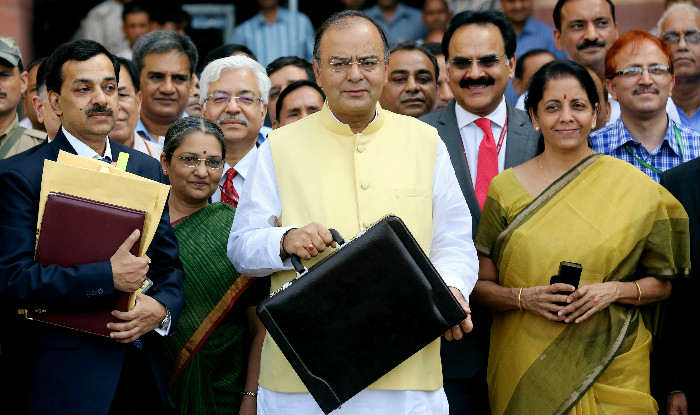 Finance Minister Arun Jaitley on February 1, 2018 presented the Union Budget for the Financial Year 2018-19, in which a total outlay of INR 2,95,511.41 Crore has been earmarked for the country’s Defence Ministry. The allocated amount accounts for about 12.10% of the total Central Government expenditure for FY 2018-19, represents a marginal growth of 7.81% in the country’s annual defence budget.

While presenting the budget, the Finance Minister expressed his Government’s gratitude for the Armed Forces. Appreciating the efforts of the forces, he said “Our armed forces have played a stellar role in meeting the challenges we have been facing on our borders as well as in managing the internal security environment both in Jammu and Kashmir and the North East. I would like to place on record, our appreciation for the efforts and the sacrifices made by the three services in defending the interests of the nation.”

While outlining the commitment of the Union Government for the modernization of the force, he noted that the government would shortly be introducing the Defence Production Policy 2018. This policy is aimed at promoting domestic production by the country’s public sector, private sector and most importantly the MSME sector.

He also outlined a number of initiatives that the Government had initiated to develop and nurture India’s defence production capability, in an effort to make the country self-reliant in meeting the requirements of the armed forces. Further, he announced the setting up of two defense industrial corridors, which the Raksha Mantri Nirmala Sitharaman said would promote the growth of indigenous products. Mr. Arun Jaitley, further, termed that the efforts made to open up private investment in defence production and liberalising foreign direct investment remain to be the cornerstone efforts by the Government.

Out of the allocated INR 2, 95,511.41 crore, a major portion – INR 1,95,947.55 crore – has been earmarked for the annual revenue expenditure and the remaining – INR 99,563.66 crore – has been dispersed for the annual capital expenditure. While the revenue expenditure handles expenses related to salaries and maintenance of establishments, it is the capital expenditure that drives the modernization programs of the country’s armed forces. For payment of pensions, which is independent of the Defence budget, the Government has allocated INR 1,08,853.30 crore. 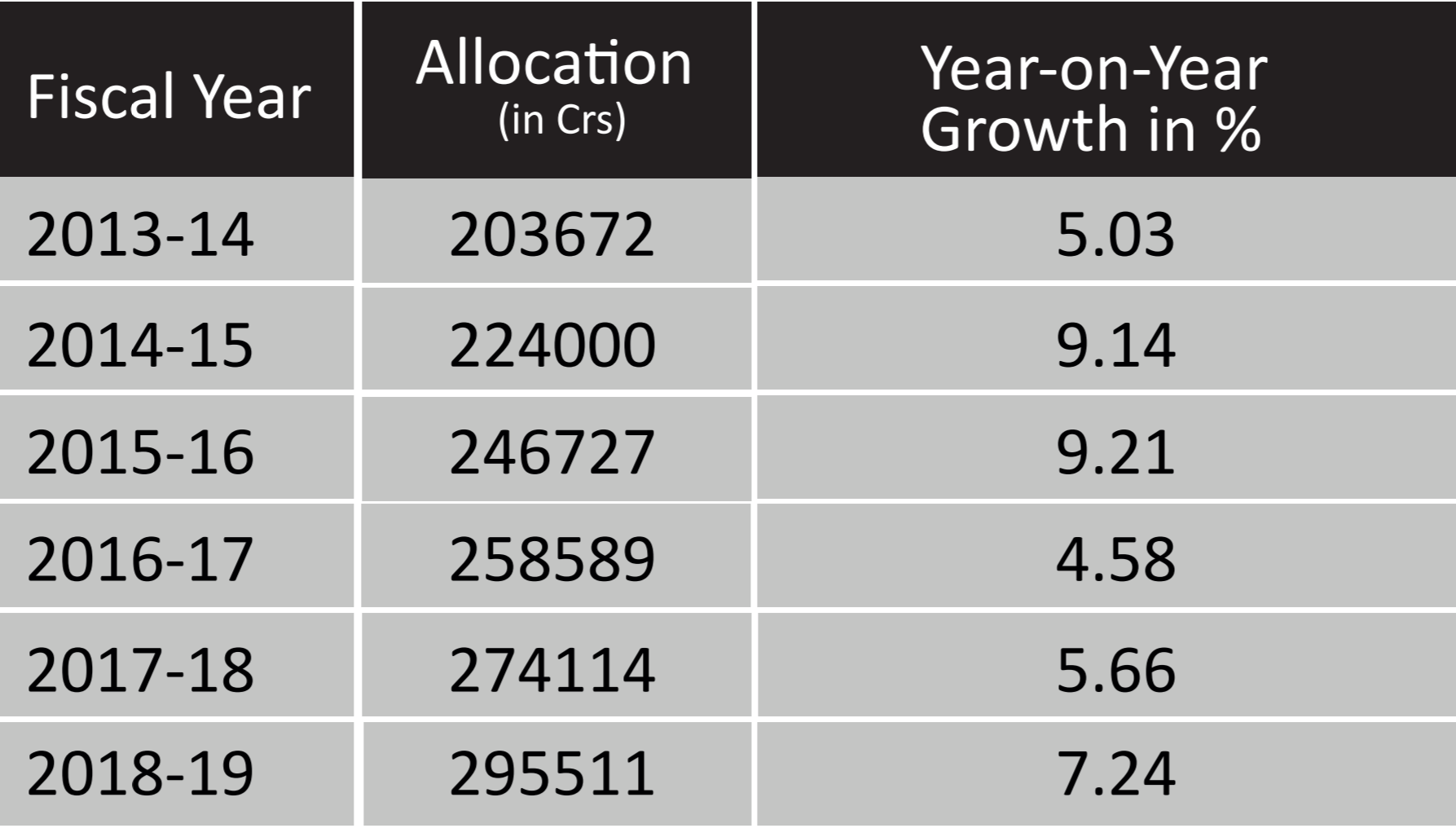 The allocation figures clearly indicated that the dismal manpower cost management has yet again eclipsed the modernization of the country’s armed forces. The defence budget, which amounts to about 1.58% of the projected GDP for FY 2018-19 remains to be the lowest such figure since the 1962 Indo-Sino war.

The capital allocation component, which handles the modernization programs of the forces and the development of organizations under the MoD, has been allocated INR 99,563.66 Crore. The allocation for the capital head has seen a marginal increase of INR 13,075 crore from the INR 86,488 Crore, which was the allocation in FY 2017-18.

In FY 2018-19, the Air Force has been allocated INR 24, 708.97 crore for handling its requirement of fighter aircraft and helicopters. This, however, will not translate to newer orders, as the force has high amounts of committed liabilities. In the current Fiscal Year, the Air Force will have to make tranche payments for the Rafael fighters, Apache and Chinook helicopters, the indigenously built Tejas and LCH platforms concluded in the previous years. The Air Force has further been allocated INR 8174.33 crore for meeting its requirements for missile and support systems. An increase of almost 2,019.03 crore under this category means that Air Force may conclude a few major deals in the current fiscal.

The Government, for letting the Indian Army take forward its modernization program, in FY 2018-19 has allocated INR 26,688.42 crore for the force. A bulk of this amount – close to INR 17, 197.66 Crore – will be spent for acquisition of rifles, ammunitions, bullet proof jackets and helmets, howitzers and field guns. A major portion of these equipments will go on to arm the Army’s infantry battalions.

Further, the Army in this fiscal is expected to shed about INR 1812.92 crore for acquisition of helicopters for arming its aviation corps. The force has already committed for more than 226 Kamov Ka-226T helicopters with HAL and Russia. Besides this, the Army has also placed orders for the indigenously built LCH (Light Combat Helicopter) from HAL.

The Army has been allocated INR 1972.11 crore for meeting the needs of heavy and medium vehicles, which includes the demands of the mechanized forces for the acquisition of tanks and ICVs.

The Indian Navy, which is on a rapid path of modernisation, has been allocated INR 20, 848.16 crore for FY 2018-19, the same figure stood at INR 19,348.16 crore in the previous budget. Of the 20,848.16 crore, 10,200 crore has been allocated for the acquisition of newer naval platforms. Further, the Navy will shell out INR 1,900 crore for the meeting the requirements of its aviation wing. A provision of INR 2,000 crore has been made for handling naval projects across the country.

While the country’s lead defense technology provider Defence Research and Development Organisation (DRDO) has been allocated INR 9,734.45 crore, the Ordnance Factory Board (OFB) has been provided with INR 803.68 crore.

Even though the Capital Acquisition has seen a marginal raise of INR 13,075 crore in allocation to INR 99,563.86 crore from FY 2017-18 allocation of 86,488.86 crore, a majority of it will be earmarked for committed liabilities. Initial projections peg this amount to be close to INR 79,650 crore, leaving only INR 19,912.6 crore for capital acquisitions in this fiscal year. With almost 80% of the amount in the capital head being routed for payment of previous programs, there is hardly any scope for concluding any fresh procurement in FY 2018-19.

The dismal allocations have meant that the country’s Armed Forces will continue to grapple with critical operational constraints. Successive skewed allocations by the Finance Ministry for MoD raises serious questions of how the Government will tread forward in meeting its commitments to the Armed Forces.

Successive dismal allocations have yet again raised questions about how the country’s military forces will take forward their long term modernization programs being pursued under the Long Term Integrated Perspective Plan (LTIPP). For realizing LTIPP, the armed forces had sought an allocation of just over INR 26,84,000 crore over the next five years. Even though the Government, under the 13th Defence Plan, had projected to outlay INR 12,88,654 crore for capital outlay, there are serious uncertainties on meeting it’s own commitments.